In what is a surprise to absolutely no one, Assassins Creed Odyssey has been leaked after  a picture of  merchandise was posted online. 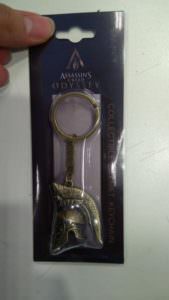 The merchandise in question was a small keyring which featured what looks like a Spartan soldiers helmet.

According to reports, the game will be set in Ancient Greece which seems highly likely given the trailer that they showed was copying that famous scene from 300.

Assassins Creed Odyssey will apparently also introduce dialogue options which will be a first for the franchise. You will also be able to choose between male and female character. More will be shown at E3 in just over a weeks time.

You can check out our Ubisoft E3 2018 preview, where I hoped that they wouldn’t show a new Assassins Creed.

AC Odyssey certainly has alot to prove after last years AC Origins re-established the franchise as a fan favourite. One of the main reasons for that was beacuse there a couple of years gap in between AC Syndicate and Origins. Now, it seems that Ubisoft haven’t learned their lessons and have gone back to doing yearly releases.