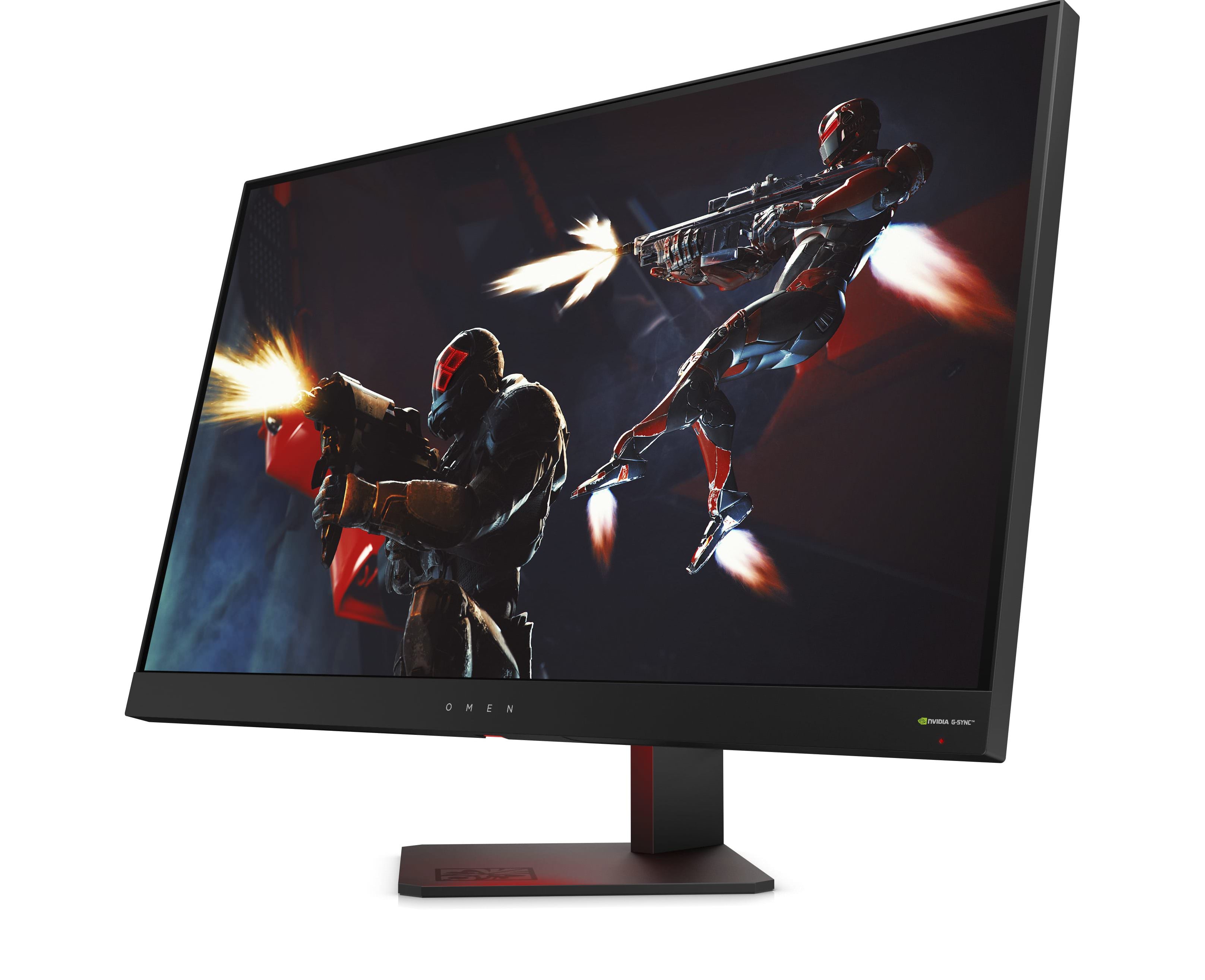 Much like everything in the Omen series, Omen by HP 27 tries to marry as many features with the best possible components in a slightly gaudy shell. If you are a fan of Omen by HP‘s bold and aggressive branding then you will feel right at home in front of the Omen by HP 27. However, with the majority of the monitor’s visuals dominated by a smooth 27″ QuadHD 165Hz display, this reviewer will wager his rent that nobody will be able to take their eyes off of it when it’s gaming.

With its textured rear panels, foreboding LED/logo combo and hidden buttons, Omen by HP 27 fits the Omen line-up well. While it’s certainly more conventional looking than the Omen by HP X 17 or Omen X by HP desktop, HP did push the visual boundaries about as far as they realistically could. Monitors have to have a rectangular screen and minimal bezel – there isn’t much wiggle room.

The choice of an LED below the screen pointing to the Omen logo is both functional and aesthetically interesting. Some users will elect to have a neutral white or pale yellow to alleviate dim-room eyestrain while others will pick something horrific to add to their macular masochism.

The diamond-shaped foot and sharply-rounded corners are subtle details that feed in the Omen look and help the monitor stand out visually.

The G-2-G response time is largely the result of HP choosing a TN panel over IPS – for gamers, this is essentially a trade off of incredible response times and minimal lag input VS. colour depth and contrast ratio

The ease with which users can adjust their display is an under-rated aspect in judging such devices. Omen by HP 27 mixes a couple of errors and oversights in this respect, albeit mixed with some clever design.

HP really dropped the ball on some of the basics. The addition of a headphone stand is nice on paper but it’s behind the screen. The buttons are behind the panel rather than on the side or lower edge – it takes that little bit longer to find/use them. A user can adjust a preset to their liking and save the settings but there is only one custom slot. In an age when many premium gaming monitors come with auxiliary controls with custom-settings hot keys; one custom slot is shocking.

The stand and spring-loaded vertical adjustment slide are faultless aside from the slightly irritating sound it makes while moving.

Though the vast majority of users will use the provided stand, the VESA mount arrangement is sub-par. I noticed the screws were short and didn’t inspire confidence that it would hold up to regular adjustable stand use. After a short period of periodically turning the screen to face the couch, the screws became loose and sheered.

165Hz Gaming is objectively slick and while shaving the response time down to 1ms might seem arbitrary, it does give gamers one less thing to blame when they get fragged

The display itself is excellent for gaming. Bright, sharp and incredibly smooth. Users upgrading their FHD 60Hz monitors to match their increased gaming power will probably cry a few tears of joy. I know I did. To get the very best from the 165Hz refresh rate, users will need a serious rig (or history’s best-optimised game).

Games are noticeably smoother at 165Hz and the 1ms grey-to-grey response time is excellent. The G-2-G time is largely the result of HP choosing a TN panel over IPS – for gamers, this is essentially a trade off of incredible response times and minimal lag input VS. colour fidelity and contrast ratio.

For NVidia GPU users, the application of G-Sync is superb here. Screen-tearing was rare, if not completely absent while using compatible hardware. G-Sync is proprietary, of course, so beware that this feature depends on your choice of GPU.

Detailed technical specs are below but it is worth pointing to the contrast figures. A 1000:1 static contrast is good for a TN panel but mediocre overall – you won’t be editing photos on the Omen by HP 27.

The display seems a little bright out of the box. The backlight bleed is also severe – users would do well to adjust the settings immediately as these bleeding edges, the panel’s greatest flaw, are more obvious at higher outputs.

The TN tech of the panel isn’t as nuanced or colourful as other display types nor does it reach their deep darks so an adjustment to brightness is recommended to tackle the over-blown brights and ‘grey’ blacks.

Another quirk of the TN panel is that vertical viewing angles are somewhat shocking – since the technology isn’t common anymore (but making a comeback!), you may forget how quickly it blows out, inverts and then fades away beyond 150 degrees or so. Horizontally-speaking, it manages to preserve detail to around 165 but colour begins to fade at 150 or so. For the average gamer, this probably means nothing as they will likely be sharing their screen with only one or two people at a time maximum. This isn’t a TV so a living room’s worth of folk ‘circled around the monitor watching the Moon Landing’ isn’t a realistic scenario. 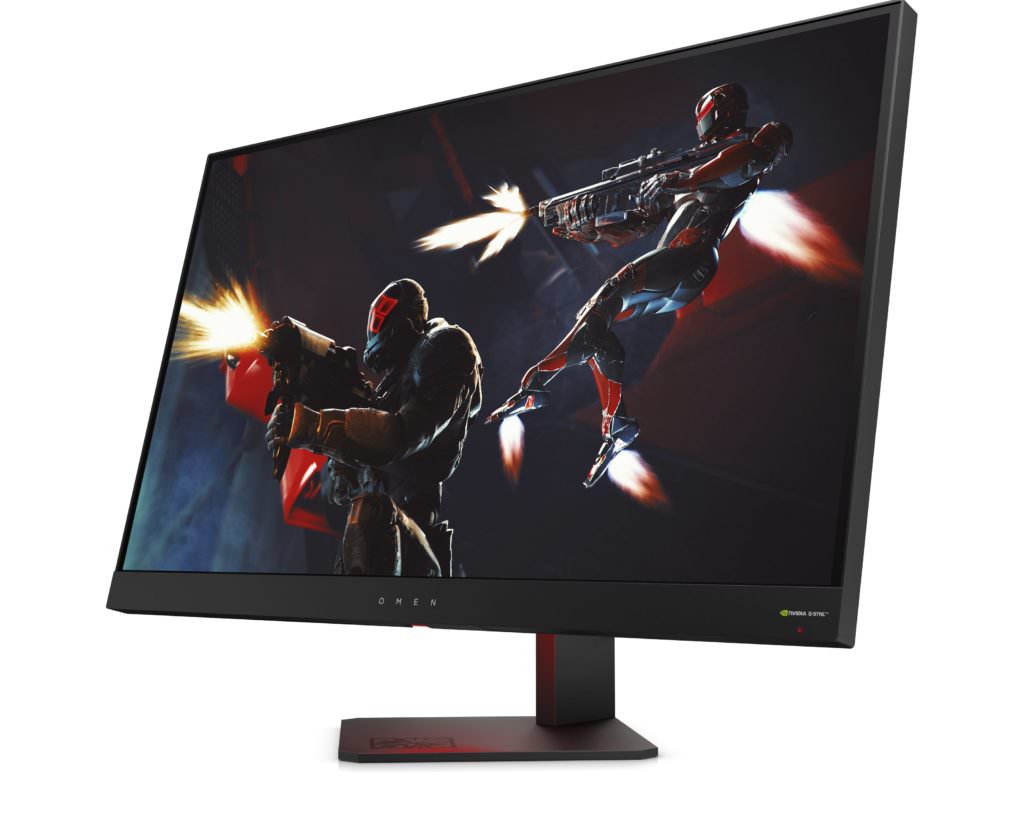 Choosing TN over IPS and adding G-Sync were great choices and HP deserve credit for their execution. 165Hz gaming is objectively slick and while shaving the response time down to 1ms might seem arbitrary, it does give gamers one less thing to blame when they get fragged.

At around €999, Omen by HP 27 is obviously aimed at those who want the fastest response times and the least lag but don’t mind paying the premium. The issue is that at nigh-on a grand, consumers should expect a flawless user experience that just isn’t here.

The competition can match the impressive numbers while beating Omen by HP 27 elsewhere. There are other 165Hz monitors with G-Sync and minimal IL at a slightly lower price point.

I’ve been on the fence about buying this or the highly competitive (and sometimes on sale) Dell
S2716DG. I’m sure I’d be absolutely fine with either but like the aesthetics of the HP. I just don’t like the price premium given that the Dell seems to have it beaten in a few areas.

Excuse the late reply – thanks for the compliment.

But more importantly; the price is the definitely the single biggest issue – the gaming performance is unquestionable. Even 900 quid would make it easier to sell but as it stands, it’s considerably-to-vastly more expensive than other most other gaming monitors with similar features.

It looks great but ultimately the extra few bucks for a nice looking screen is down to the potential customer’s preference.

I appreciate the review as there haven’t been all that many from what I could find. Thanks for that.

I finally bit the bullet and bought it last night. I found it NIB for $449 US. For that price, I’m perfectly content for what I’m getting but in no way, shape, or form would I have paid MSRP for it.

As luck would have it and based on where my rig sits, the cables were too short but I’ll remedy that today. I can’t wait. My wife is less than thrilled but that’s just how it goes sometimes.

Just bought mine for 300 dollars brand new at Walmart in the clearence section.

Wow. You scored even better than I did. Well done.

Yea, very lucky that there’s no competition in my city on pc gaming.