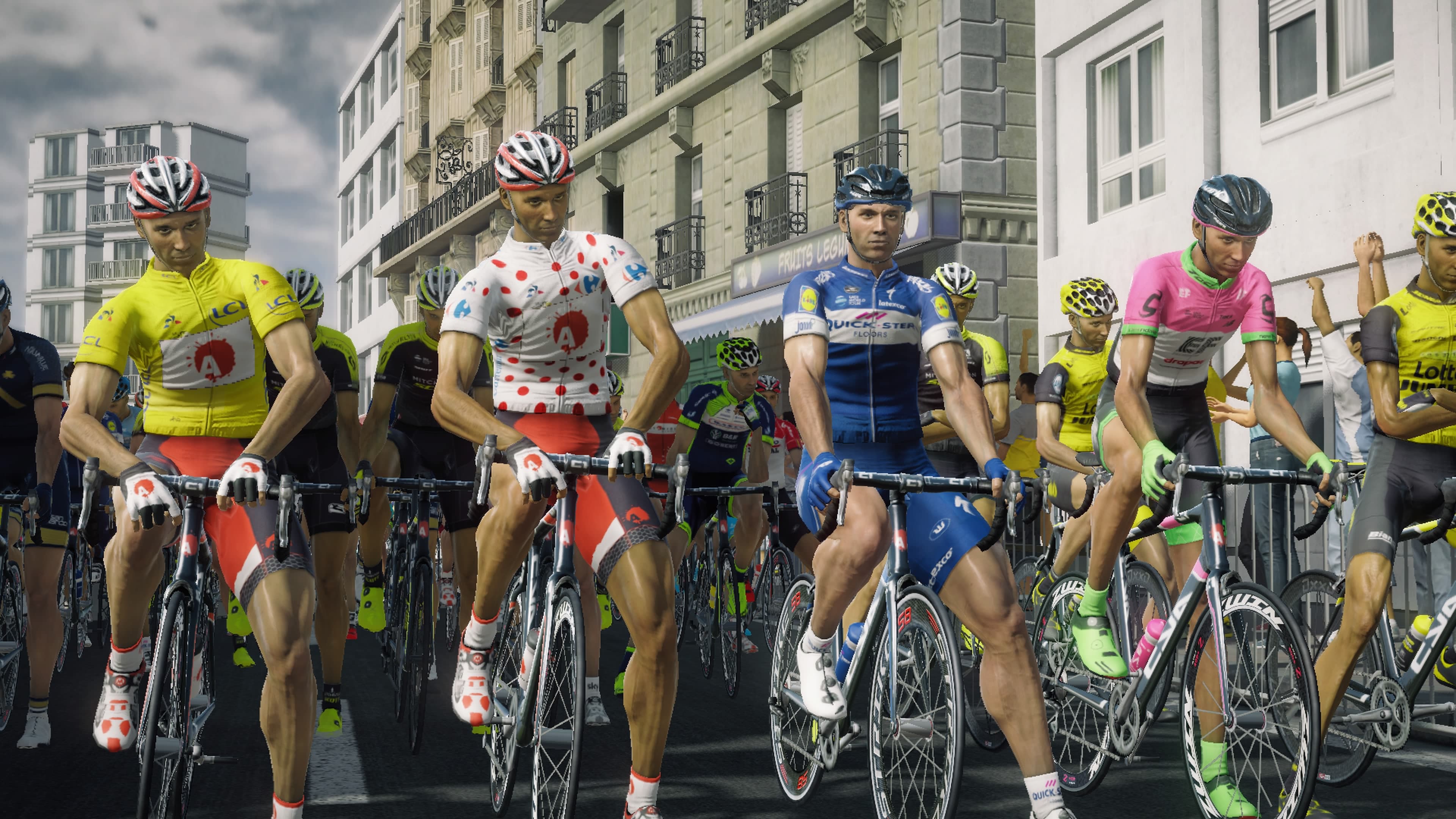 Tour de France 2018 is the latest instalment of Cynaide Studio’s ‘ambitious’ series based on the Euro pro cycling season. This writer has played two previous efforts and was well prepared for the punishment that lay ahead.

I can imagine a few of our readers are more than a little confused as to why a bicycle race warrants an annual video game. Put simply, ‘le Tour’ is a minor cultural fixture in Western and Central Europe as well as a sporting event. Most people know somebody who went to a TdF. Quite a few would know who the current champion is and it’s live on telly in most countries.

With that out of the way…

The biggest aesthetic sin is not from the quality of graphics, poor as they may be, but rather in the ‘quantity’

The first thing that the player will notice is the menus – they are visually unappealing and the music is weak. Whilst this is not a AAA title, the license could have been teased out a bit more. Tour de France 2018 could look and feel more like an ‘official’ title with just a little more effort. 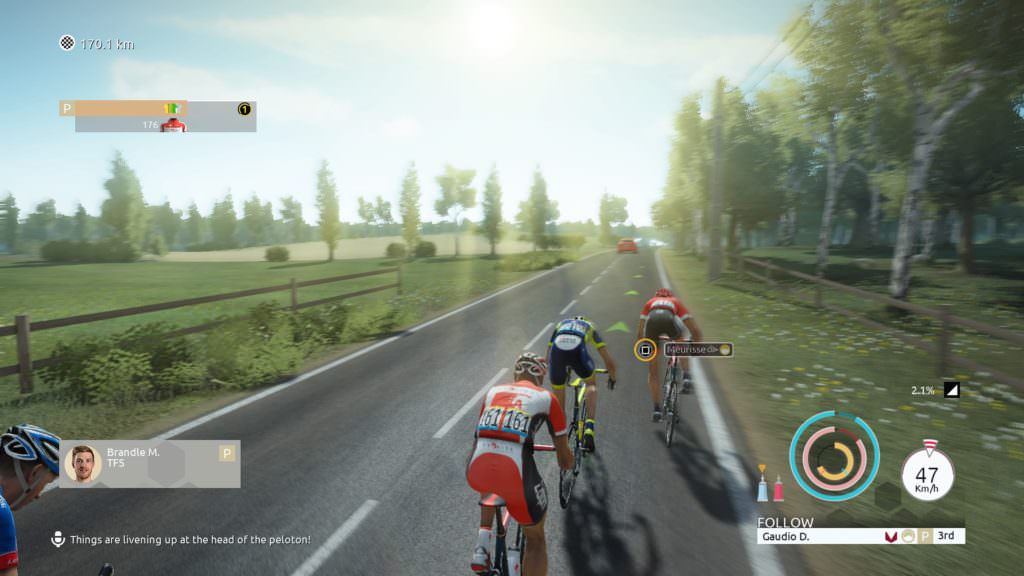 The game is also boring to look at in-race but it does capture a rough sense of France (and Belgium) and the cheering crowds represent a tiny slice of the excitement around le Tour.

The biggest aesthetic sin is not the quality of graphics, poor as they may be, but rather the quantity. The roads, scenery, buildings have very little variety. It’s as if there are two species of tree in France and they are all the same age. 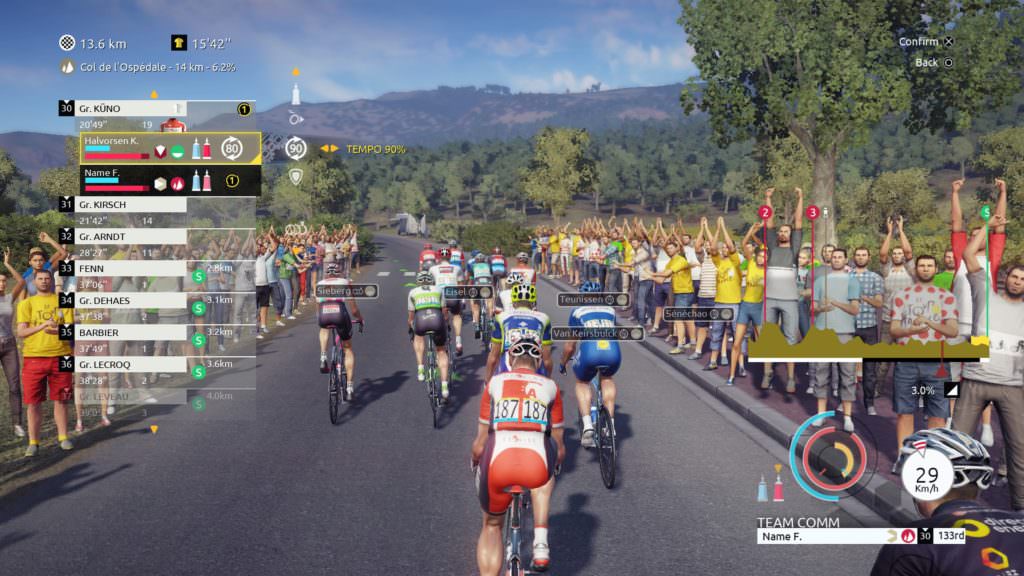 Animations are limited to a point where any TV-style presentation is ruined by dozens of riders or fans in the exact same pose or lock-step in motion.

if you meet the devs halfway, suffer the tutorial and spend 45 minutes at a time being simultaneously bored and stressed, TdF 2018 becomes a strangely enjoyable challenge

Expecting action from a game about tour cycling is foolish. Tour de France 2018 continues the series’ emphasis on strategy, mental endurance and discipline with some RPG elements during the two campaign routes. 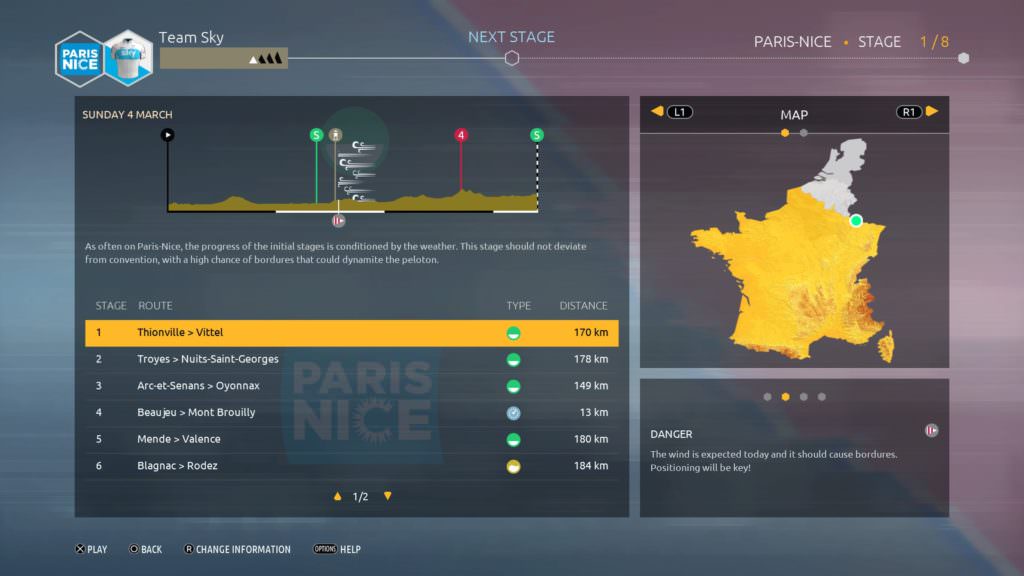 In a single-tour game or the Pro Career, players can hop back and forth between riders in their team or provide very detailed real-time commands to their team-mates. If players ignore the strategic elements and stick with one rider, they are missing the point and will be punished. In fact, doing anything that isn’t an objectively good idea is punished. For many gamers, this harshness and lack of accessibility will make Tour de France 2018 a hard ‘no’.

However, if you meet the devs halfway, suffer the tutorial and spend 45 minutes at a time being simultaneously bored and stressed, TdF 2018 becomes a strangely enjoyable challenge.

The format of the tours, races and seasons lend themselves to a deceptively deep strategy game when combined with some imaginative mechanics. For instance, making the right riders peak during their best events or sacrificing a rider by using him as a windshield for an early breakaway during a race are just two ways to give yourself a tiny shot at a sliver of success.

The overarching goal of most of the races is to preserve stamina in at least three riders till the last kilometre or two then sprint to the finish. Your riders will also recover limited energy between stages so a player will need to maintain short, medium and long-term strategies. Keep this in mind every time you furiously hammer ‘break’ and then wonder why you can’t win a tour. Constantly relying on other teams to shield you from the wind will lead them to actively stop you from slip-streaming so you will need to balance the give’n’take.

Players can fast-forward through races if they feel like a rest or get saddle-rash but I found that things often went Pete Tong during these instances. Instead, instructing AI to ‘protect’ you and holding Square (X on Xbox) to stay in his slipstream or riding at XX% for a bit is probably the best compromise.

There are other events that rely on competent braking and cornering combined with judicious abuse of your glycogen. These short sprints offer a nice break during the gruelling tours but this games gasbag found them to be the least satisfying event due to racing the clock on an empty track.

There can be over a hundred official riders on screen at any time, with hundreds of fans visibly lining the course. The crowd will also invade the road and quickly hop away from a potential crash. Details like these are nice but they are undermined by more obvious faults. The aforementioned repetition and poor visual quality aren’t helped by a poor physics engine.

Crashes and bumps are largely avoided on lower difficulties in a very jarring and artificial manner. Players and AI are often packed so tight they are obviously clipping, bikes skate sideways around corners to maintain a slipstream. There are so many detachments for reality that it’s too easy to be taken out of the very long moment.

Cyanide Studios had a tough task in translating days-long events into somewhat digestible chunks. Tour de France 2018 does a decent job at capturing the strategic elements and in-race mechanics but it’s all too difficult to get into. The game asks too much of players when it comes to immersion.

Between the sub-par menus, physics and graphics, a player will need to invested in the sport to get to the ‘enjoyable challenge’ part of the Tour de France 2018 experience. Others will find this to be a steep uphill section.

And this isn’t even on the soundtrack…