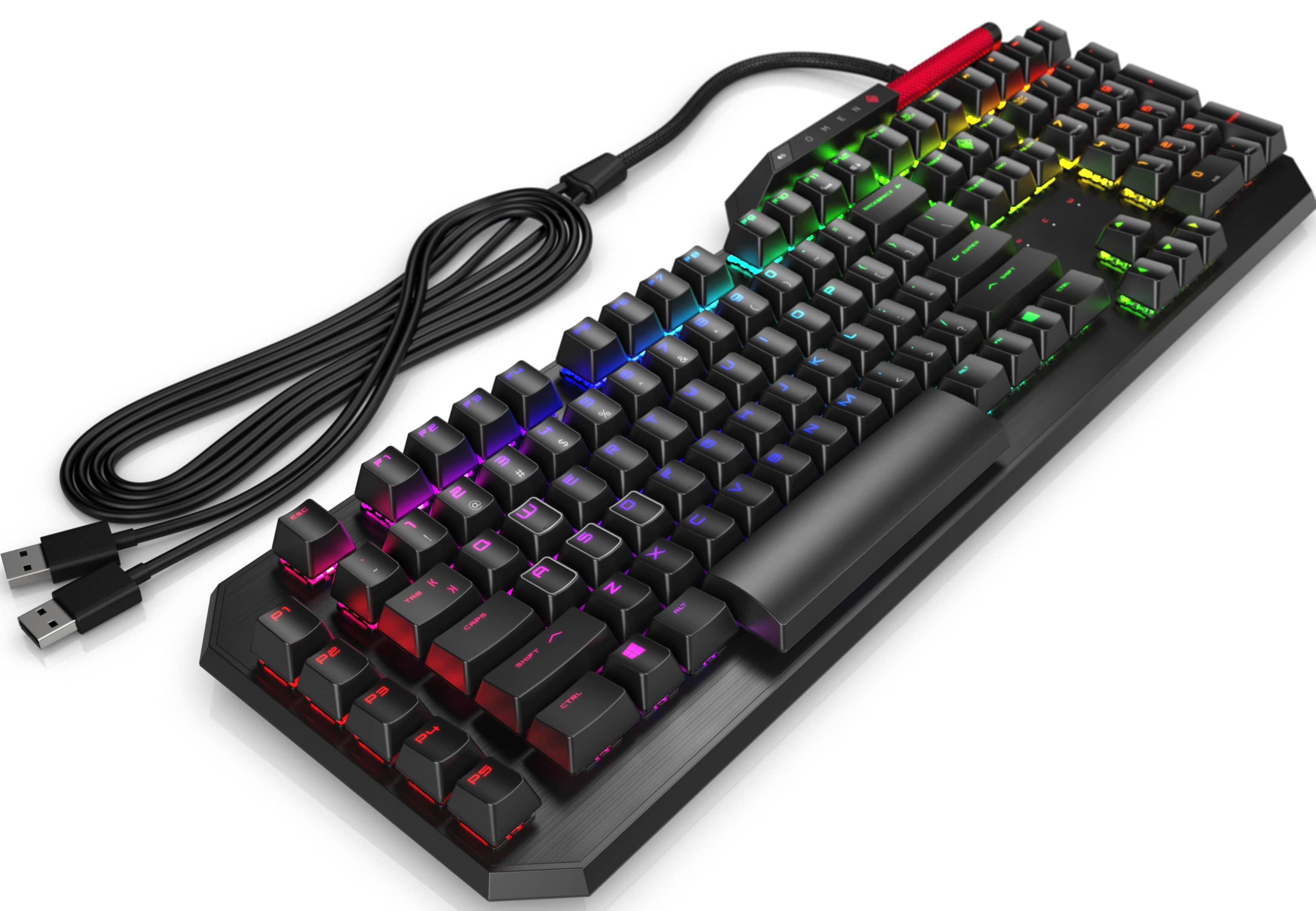 There are many gaming keyboards on offer these days. That is to say, the market is saturated with a post-Fordist case study of consumer customisation, choice and commercial competitiveness. Omen ‘Sequencer’ from HP has a few USPs to stand out from the crowd; for one, basing itself on the ‘tried, tested but ignored’ technology of opto-mechanical switches.

Far from ‘Predator’s own mouse’ or ‘Robocoffin’, the keyboard wouldn’t look out of place in an office

Whether or not the advantages brought by the speed of light are worth switching over from a Cherry MX is up for debate but the Omen ‘Sequencer’ stands up elsewhere.

Maybe fashion has come to meet Omen’s aggressive designs, maybe keyboards just fit the Omen aesthetic or maybe HP have dialled back on the branding. Regardless, aside from the bevelled edges, bezel-less frame and red roller of doom HP’s Omen Sequencer is surprisingly muted.

Far from the ‘Predator’s own mouse‘ or ‘Robocoffin‘ designs of other Omen products, the keyboard wouldn’t look out of place in an office; provided you were under 50 and didn’t mind it being robbed.

If it weren’t for the needlessly futuristic squared font on the keys and small Omen logo, you wouldn’t necessarily think ‘HP’ immediately.

The backlit keycaps give the keyboard most of the customisation options you would expect from a device at this price. Individual key colouring and animations will dominate the look of the keyboard.

The firm snap and definite activation of the blue switches are pleasant to type or game on. The keys have a travel that furious typers will appreciate. The gigantic spacebar will divide opinion – normal gaming spacebars are big enough for most and oversized offerings can look ugly to some. Then again, the ten-thumbed amongst us might possibly need one that is about 14 times the size of the rest of the keys.

What is more bizarre than an oversized space is an undersized ‘Return (Enter)’ key. Many touch-typists appreciate the larger Shift, CTRL and Return keys for their baby finger to stretch towards – why break that ergonomic tradition. Expect to hit the mind-bogglingly placed and sized ‘/’ a lot.

The bezel-less design is easy to clean and takes up a little less space on the desk for those who are tight on desk room. The volume roller is a design highlight – it’s easy to roll to change volume but stiff enough to stay in situ until you need it. The volume roller feels premium and even with several ways to change volume within reach at my desktop, it begged me to roll with it. Almost next to the roller is a mute button that is a nice inclusion but doesn’t get nearly as much love as the roller.

The board is reassuringly heavy and sturdy. Despite the lack of bezel and fairly shallow design, Omen Sequencer is stiff and solid.

Disappointingly though, the keycaps aren’t totally flex-free. For this price, 100% flex-free keys are almost to be expected. My SS M800 ‘Apex’ has been in use for about 18 hours a day for around four years and the vast majority of the keys still don’t wobble or waiver at all. While Omen Sequencer’s key flex is minimal and never in any danger of affecting your 1337 Word Document skillz, it’s still a nuisance.

Why You Are Here – The Light Show

A healthy human male in his mid-thirties who writes about video games and technology all day has a primed visual response time of around 245ms so the improvement wrought by the opto-mechanical switcharoo amounts to less than 1%. That’s before we mention that some premium mechanical keys that have been optimised for speed have key activation times of under 2ms.

You could even argue that waiting for the next poll will add some latency to both. 1,000Hz designs are the standard for PC gaming peripherals so that ‘up-to-1ms’ of lag comes as standard.

Opto-mechanical switches can also be reactivated with better temporal accuracy thanks to being less prone to mechanical hysteresis. Opto-mechanical keys’ almost-zero bounce probably provides more benefit to the serious keyboard user than the other marketed metrics. Bounce and software debouncing are a bit more esoteric though so I can’t really blame the marketers for leading with anything else.

Whether or not you feel that 2ms is worth shaving from the chain of command, HP Omen Sequencer is great to look at and to gamer or type on. Save for some ergonomic missteps, Sequencer is an excellent main peripheral for someone after a gaming keyboard that moonlights as an all-rounder.

HP Omen Sequencer is available now at around €179.99