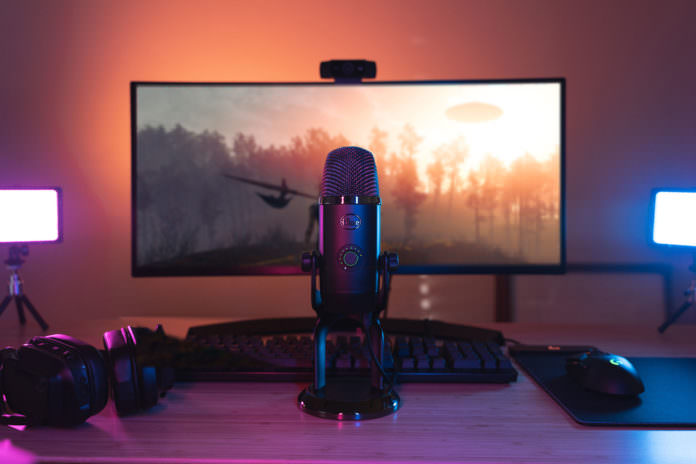 The Yeti X costs 152.99 euros and comes with a corresponding desktop stand. If you take it out of the box, the microphone is already mounted on this stand. However, it is easy to unscrew the Yeti X and, thanks to the mounting system on the bottom of the microphone, attach it to another microphone stand. This requires an extra thread reducer, which is not included in the delivery. You will also find a 2 meter long USB-A cable in the box and a very brief manual that explains the basics of working with the Yeti X.

The build quality of the Yeti X can rightfully be called solid. The microphone itself has a sturdy, metal grille and is made entirely of hard plastic and metal. The stand is considerably weighted in the base and has a rubber bottom which makes it very sturdy at all times. The Yeti X does not have DSP (digital signal processing). Just plug it in and you’re ready to go – you don’t actually need the aforementioned quick reference guide. You can use the Yeti X in combination with the Logitech G Hub software. We have discussed this software extensively in the review of the Logitech G Pro X Wireless , but we will also look at it later in this review and dig through for any new functionalities.

However, most settings of the Blue Yeti X can be controlled with the two buttons that you find on the front and back of the microphone housing. The button on the front of the microphone has four functions. It can mute the input signal, control the monitor volume, adjust the gain of the microphone and control the blend. In this case, the blend is the same as, for example, the game-chat balance of your game headset: at the bottom of the microphone you can plug in your headphones and then choose with this setting whether you hear more of your own voice or more sound from the system or game. . You switch between the three volume functions of this button by pressing it briefly. To mute the input signal completely, press the button quickly. In addition, a ring of LED lights has been incorporated around this front button to visualize the selected function, such as the volume.

As mentioned, the push button on the back of the Yeti X switches between the different directional characteristics. The Yeti X has stereo, cardioid, omnidirectional and eight characteristics. You can roughly deduce which way they are facing on the basis of the symbols of the corresponding characteristics. The cardioid characteristic is often referred to in practice as “kidney-shaped” because the associated symbol resembles a human kidney. In this mode, the microphone looks straight forward, which makes this mode most suitable for streaming, for example.

The different characteristics of the Yeti X are fairly precise. It must be said that in the omnidirectional mode at the points where the listening field of the membranes overlaps, there is a tonal change. In practice, it is useful to take this into account: the angle at which you speak into the microphone in this mode has a significant influence on the recording quality. The stereo mode is also a nice addition if, for example, you want to experiment with making music recordings.

The software and the sound

The Blue Yeti X works with both Mac and Windows PCs immediately after connecting. The Logitech G Hub is also available for both systems and gives you access to BlueVoice. BlueVoice is a so-called channel strip: a succession of different effects that all process a different part or aspect of the sound. There are effects here that you as a gamer are probably familiar with – such as the equalizer, the high-pass filter and the noise reduction – but there are also a few options that are less known.

For example, the expander / gate ensures that all audio that falls below a certain volume is automatically clipped. This way you make your voice signal a lot cleaner. The de-esser processes the consonants and makes their sound softer: hard s-sounds are muffled and the sharp edge of t’s and k’s is rounded off. The compressor makes the volume of your voice more even by correcting higher and lower volumes to an average and with the limiter you can set a maximum output volume.

What is striking is that the Yeti X is very forgiving when it comes to pop sounds. Even without an additional pop filter, the Yeti X handles p’s and b’s very well, even when the microphone is positioned very close to the user. In the higher frequency regions, where the s and t sounds are prominent, the Blue Yeti X is fairly well defined. However, the s and t sounds in some cases become a bit shrill. The de-esser from BlueVoice can contribute something to perfecting the sound, but as we already concluded in the Logitech G Pro Wireless review: these effects are not of very high quality.

The Blue Yeti X is designed for streamers, podcasters and media makers. This means that the microphone will mainly be used to register voices and the tone and sound of the microphone is therefore aimed at this. This results in a pleasant presence and good definition in the mid-high frequencies without the sound becoming sharp. Another positive aspect of the sound of this USB microphone is the fullness. As a gamer, you are most likely familiar with the radio-like tone of most headset microphones. This thin sound is nowhere to be recognized with the Yeti X. The microphone sounds quite warm, full and even quite defined in the lower frequency regions.

However, a number of problems arise when using the Yeti X in combination with a macbook. For example, the Logitech G Hub does not want to fully recognize the Blue Yeti X and the software keeps asking for the microphone to be unplugged and plugged in again. Also, there are sometimes audio driver problems on Mac. For example, after using the Yeti X, the system sometimes does not properly switch back to the system audio, so no more audio is played after you have disconnected the Yeti X. In that case, only a restart appears to be sufficient to solve the problem. You can nevertheless use this Yeti X in combination with a macbook, but it is advisable to use other software to apply any effects.

The Yeti X is an ideal option for the streamer, gamer, and serious content creator looking for a simple plug and play voice recording option. For the price, this microphone really knows how to deliver a very convincing sound and thanks to the intuitive and simple controls, you can really get started in an instant. Thanks to the different directional characteristics, the Yeti X is also very versatile: you can make it perfectly suitable for use during an interview between two speakers at the touch of a button.

The only caveats about the Yeti X are the fact that the accompanying software is not of exceptionally high quality, this software does not work well with Mac and that there are no built-in sound profiles in the Yeti X itself. In practice, however, all these caveats turn out not to be deal-breakers. Partly because there is enough (free) software available to apply effects afterwards and partly because the hands-on experience with the Yeti X – thanks to the LED lighting, among other things – is simply very good. The Yeti X is therefore completely worth its 152.99 euros.

Daire Hardesty - 3 May 2021 0
A Switch version of Ni No Kuni 2: Revenant Kingdom appears to be in development. This is evident from a statement on the website of ESRB, the...