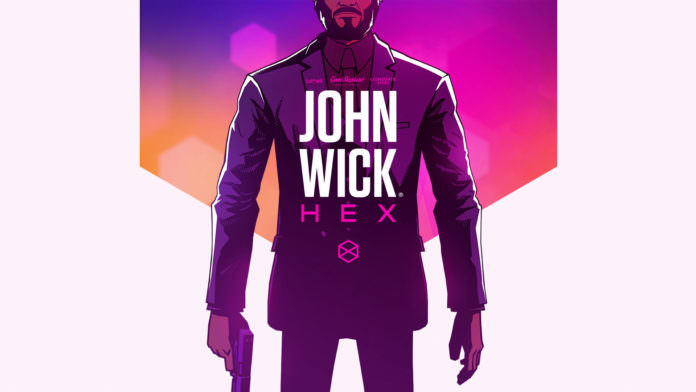 Starting John Wick Hex for the first time is an interesting experience. For those of us who have seen the gritty realism of the John Wick movie franchise, the art style is a bit jarring initially. However, as you get to grips with the games excellent control scheme, and start to appreciate the clarity of the visuals, any concerns about the looks of the game fade into the background.

Lit in a vibrant palette of pinks and blues, it almost looks like a VR training simulator that has been cut out of a larger game. The advantage of this clarity is that it makes picking out the bad guys from the background easy, and considering how eager they are to kill you, that’s an advantage I would be loath to give up for more “realistic” visuals.

The sound design is excellent as well, with audio cues to indicate you have been spotted, and crisp weapon sounds. The music is OK, and the best thing I can say about it is that it does not intrude. It picks up the pace during boss battles, but otherwise tends to fade into the background.

Two of the actors from the movies make an appearance to supply voice performances, Ian McShane as Winston, and Lance Reddick as Charon. The always amazing Troy Baker returns in an excellent performance as Hex. We don’t get Keanu, so we are definitely in silent protagonist territory.

The control scheme is beautifully obvious. Very rarely do you come across a game where you almost immediately know how to control your character. Click where you want to move. Click on an enemy, and see the available attacks. Hover over an attack to see it’s time cost. Click to execute the attack, and hopefully your opponent. And that’s all there is to it. Move, attack, move, attack. It flows so well.

When I initially started playing, although I understood how to make John do what I wanted, I didn’t really understand how the various parts fitted together. Then I figured out that, unlike some games where you just mash your attack button, you have to think strategically. Throwing a pistol is faster than shooting it, and it dazes the opponent for several seconds. You are, of course, now unarmed, and have to use brawler attacks until you pick up another weapon.

However, when used in combination, there is an almost ballet-like dance that flows from one move to the next: OK, I’m facing 2 guys, one is going to shoot me before I can shoot him, so I throw my gun at him, step over to the second, take him down, pick up his gun, and shoot the first before he clears his head. Now, combine that with stance changes that allow you to roll, pushing enemies to move positions, and the fact that simply moving lowers the chance of you being hit, and you have a rich palette to choose from. You know that “flow” sensation you get when you are really zoned into the groove, and everything seems easy and smooth? John Wick Hex is one of the best games I have played in years for achieving that almost meditative state.

The time bar at the top of the screen is an excellent design choice. It lets you know exactly how long you have to complete your moves, and shows potential stun times for pistol throws, etc. Each of your attacks has a percentage chance to hit, and crouching increases that chance, with the downside that you can only roll to move. Certain attacks and moves use up focus, and you can spend time to refill focus between combats; I got into the habit of refocussing after each combat section. Interestingly, this refocus after each combat takes the place of reloading my gun after every skirmish; unlike other games, if you reload with some bullets left in your magazine, those bullets are gone forever. This makes for interesting tactical decisions from time to time.

You can buff yourself between levels, and place extra bandages and weapons for later, but I usually just went for the passive bonus like reduced focus cost for rolling. There are enough weapons and bandages throughout the game if you are careful.

All good things come with a price

My only criticism stems from the fact that I am much more comfortable playing games with a controller than mouse and keyboard, and I could never really get the map to behave in a way that felt natural. I realise this is entirely down to me, and hopefully, if the game ends up on consoles, a controller scheme will be back ported to the PC version. The only other problems are that a couple of times bad guys shot me through walls, and sometimes the rag-doll effects on dead bodies glitched out, though that was just hilarious rather than game-breaking.

John Wick Hex is simply an excellent game. With an almost cliched “easy to learn, difficult to master” learning curve, it is incredibly rewarding when you start to flow with John through the ranks of the enemy. With some incredibly smart design choices, and a ridiculously cheap price as befits it’s indie roots, this gets two thumbs up and my definite strong buy recommendation.

Grab John Wick Hex, and go with the flow!