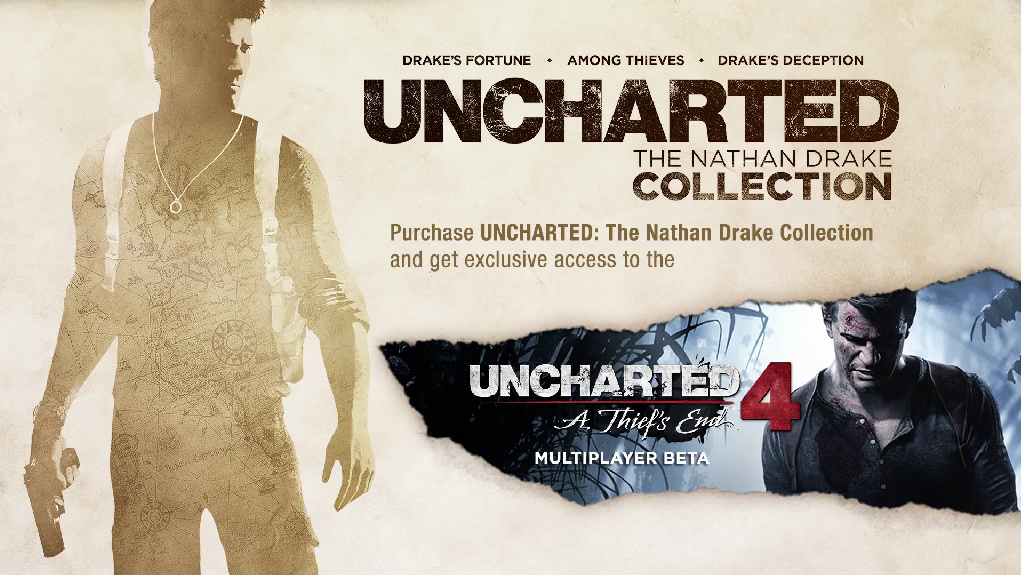 So Sony finally announced Uncharted: The Nathan Drake Collection, a bundle of the first three games in the blockbuster franchise; Uncharted: Drake’s Fortune, Uncharted 2: Among Thieves, and Uncharted 3: Drake’s Deception; available on PlayStation 4 this October.

As if the ability to play these three blockbuster games on PS4 in 1080p/60fps weren’t enough, Sony has confirmed that anyone who purchases The Nathan Drake Collection will be granted exclusive access to Uncharted 4: A Thief’s End multiplayer Beta version.

Uncharted 4 is due out in 2016 exclusively on PS4, so it’s no surprise that Sony is looking to familiarise people new to the PlayStation family with Nathan Drake and company.

Although we still have a few months to go until Uncharted: The Nathan Drake Collection releases, Sony is already taking pre-orders for it. If you pre-order today, you can receive the Nathan Drake Pack which includes single player skins of iconic Drake outfits along with the following weapons: the Golden AK-47 and Golden 92FS guns. If you pre-order the digital download via the PlayStation Store, you’ll also get the Uncharted: Nathan Drake Collection PS4 dynamic theme immediately.