The 2016 Ratchet & Clank was developed by Insomniac Games who brought us the original series and, to their credit, are probably the reason this reimagining has gone down extraordinarily well with fans (both old and new). The game is a sci-fi platformer with a pinch of comedy that follows the adventures of a furry lombax named Ratchet and a small robot named Clank.

I have to say that I found Ratchet & Clank thoroughly enjoyable from start to finish. I was a big fan of the original series and, even though I had been counting down to the release date for months, part of me felt that Insomniac were playing up on this sense of nostalgia that I, and many others associate with the series. I began my playthrough with an air of caution that it might not live up to my memories of the original games. The opening scenes where Captain Qwark references the fact that the game is based on the movie that is based on the original series, reminded me how clever the jokes had always been and, more importantly, how hilariously self aware the games often are. That opening cut scene set the bar high for me and the game certainly didn’t disappoint in terms of gameplay. 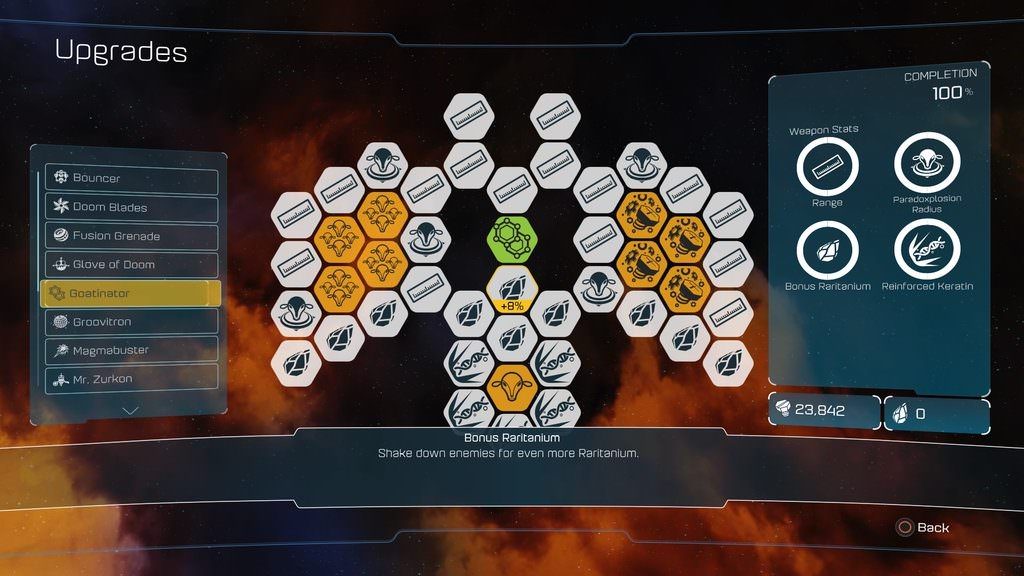 The general game mechanics are really fun to use and easy to master. They are designed for players to essentially just shoot and dodge during fight scenes. The developers incorporated elements of gameplay from other entries in the series, which, I felt, is part of what saved it from feeling dated. Gameplay mechanics like strafing combined with weapon and health upgrades found in the later games, made it feel more in keeping with modern game design conventions.  All the weapons have been taken from the original series and the more you use them the more they level up and output more damage. Players can also buy upgrades for them from the weapon vendor. The weapons system is centered around every kill giving the players a sense of achievement through satisfying kills. None of the weapons require the player to reload and the game pauses as you chose a weapon, allowing players to switch between weapons with ease. Some of the weapons are just outright hilarious, like the sheepinator which literally turns enemies into harmless sheep. The Pixelizer is a great example of something new that was added to the game that is so in keeping with the theme of the original games that I found myself questioning if it had been in one of the games.

If you run out of ammo, or you just don’t feel like using weapons Ratchet always has his wrench on hand. Unlike other weapons, the wrench’s damage output is increased by completing card sets. Card sets are an interesting mechanic in the game as they are dropped randomly and finding an entire set grants Ratchet status bonuses. Not being able to complete all the cards set on the first play through helps to funnel players towards a second attempt. This is something that a lot of the game mechanics are focused on, even the weapons. In “Challenge Mode” which unlocks once the game has been completed once players have access t “Omega Versions” of all the weapons.

There are a few different types of mini games throughout the game. Grinding along rails using your grindboots, unlocking doors with the Tresspasser and spaceship flying/fighting all make an appearance. Staying true to the original series, all the mini-games remain the same (including the slightly weird flight controls that kind of only use one analogue stick).

One of my only gripes with the game was that the button registration for the grindboots in particular wasn’t great. I found myself having to repeat one section of it a few times simply because the analogue stick didn’t seem to register left and right very clearly.

Even though this issue with the grindboots was annoying, what really speaks volumes about how great the overall game mechanics are is the replay value of Ratchet & Clank. As I noted before, upon completion the game immediately offers the option to replay from the beginning in “Challenge Mode” which I did without hesitation.

The Graphics really were just an updated version of the old series and they did really try to stay true to the original look of the game as much as possible. Sometimes when a game is getting a reboot it is all too tempting for the developers to update something with new bells or whistles or ever so slightly redesign an element of some kind. The fact that this didn’t really happen in Ratchet & Clank showed that the developers were confident in the series as a whole. What rebooting Ratchet & Clank meant in terms of graphics was that the textures needed to be refined and updated.

The diegetic sound effects (sounds that can be heard in-game by the characters) are a really important aspect of what makes kills feel satisfying. Each weapon has its own unique set of sound effects that are sometimes verging on being over the top, but that is in keeping with the overall theme of game. I really enjoyed the music by Michael Bross, who also scored the 2013 Ratchet & Clank game Into the Nexus. For the most part the music is pretty upbeat, especially in the menus and no unlike the music that comes to mind when I think of the earlier titles in the series.

The storyline of the game is essentially the story from the original 2002 game being told from Captain Qwark’s point of view. Telling the same story but from a different perspective allowed the developers a lot more freedom to incorporate gameplay elements from other games in the series.

There are a lot of cutscenes in the game but this didn’t bother me for two reasons. The first was that they were pausable, which is not common enough in contemporary games in my opinion. The second reason is that they did more than just move the plot forward and develop the characters; they really were entertaining and the dialogue between the characters is really witty at times.

When I did finally finish the storyline I felt a serious sense of loss at the thought of not being able to do it again for the first time, which is the tell tale sign of a truly striking experience. Insomniac managed to remake a game while staying true to it’s original form. Clever writing allowed them enough room to take game mechanics from other games in the series, which helped a lot to keep the gameplay from feeling dated. Ratchet & Clank has definitely been game of the year  so far for me. I would recommend it to both fans of the old series and those who have yet to play it.