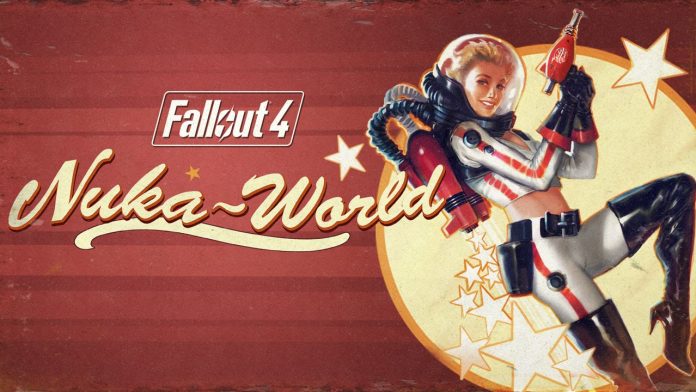 Nuka-World is the final DLC dedicated to the post-apocalyptic world of Fallout 4 and, in addition to further expanding the game world with new areas, Nuka-World leads us to discover new secrets, stories and characters. Is Bethesda’s new DLC a worthwhile conclusion to the Fallout 4 Series? Check it out below.

The DLC primarily adds the new location of the Nuka-World, a huge amusement park, which is dominated by raiders. In addition to the open wasteland, the Park includes several explorable areas such as the Safari Adventure, Dryrock Gulch, Kiddie Kingdom and the Galactic Zone. In the Nuka-world expansion, the player can assume the role of a Raider and launch their own criminal organisation, conquer the settlements and can subdue the Commonwealth piece by piece. The DLC also includes new quests, new weapons and new creatures. Similar to the island trip in Fallout 4: Far Harbor, Nuka-World brings an entirely new area full of enemies, quests and items. As the final DLC in the series, this comes as a relief as many of the DLC’s (Vault-Tec workshop, Contraptions Workshop, Wasteland Workshop) have been extremely lacking in content and provide mostly cosmetic additions to the gameplay.

Once you install the DLC and load up the game, a new radio signal steers you to the DLC entrance on the western edge of the map, from which you find an elevated railway leading to the magical land of radioactive refreshments.

NOTE: The initiation into Nuka-World is quite wild, you either need to be very good at navigating traps or have a high-level character.

Now, unless you have been playing Fallout for a while, played the previous DLC’s or are just great at hoarding resources and levelling your character you will need to focus on stealth and tact. Even with a level 43 character and great weapons, I found myself reloading saves every 5 minutes. For those with short tempers this can be very frustrating (and may even lead to a few broken controllers). However, once you get through this initial zone, you are in for quite a treat.

The individual venues are great, the five aforementioned themed parks each come with their own storyline. Nuka-Worlds highlight, in my opinion, is beyond the boundaries of the park. The design team have added many different encounters that often relies on humour that hits the mark such as a UFO Quest and aiding mysterious cult groups. 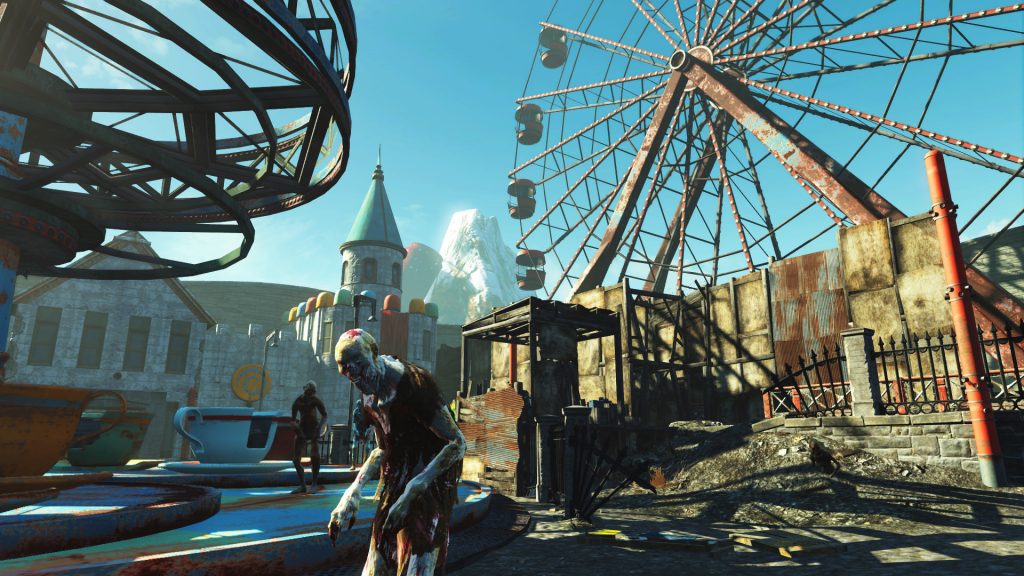 Even though the DLC is incredibly large in scale, it’s content gets repetitive and boring quite quickly. Unless your the kind of player that enjoys endlessly exploring the environments and playing small side-quests, the DLC is pretty much finished once you finish the 4 or 5 main missions. If you’re looking for the same depth and exciting characters as in Fallout 4: Far Harbor, prepare to be disappointed.

The main story is inconsequential; as the new leader of three competing Raider groups, you are sent to pacify the amusement park. To do this you will clean all areas of opponents and creatures. Nuka-World does come with quite a few new creatures but they become repetitive pretty quick, especially if you have previously done it for 50 to 80 hours in the main game. 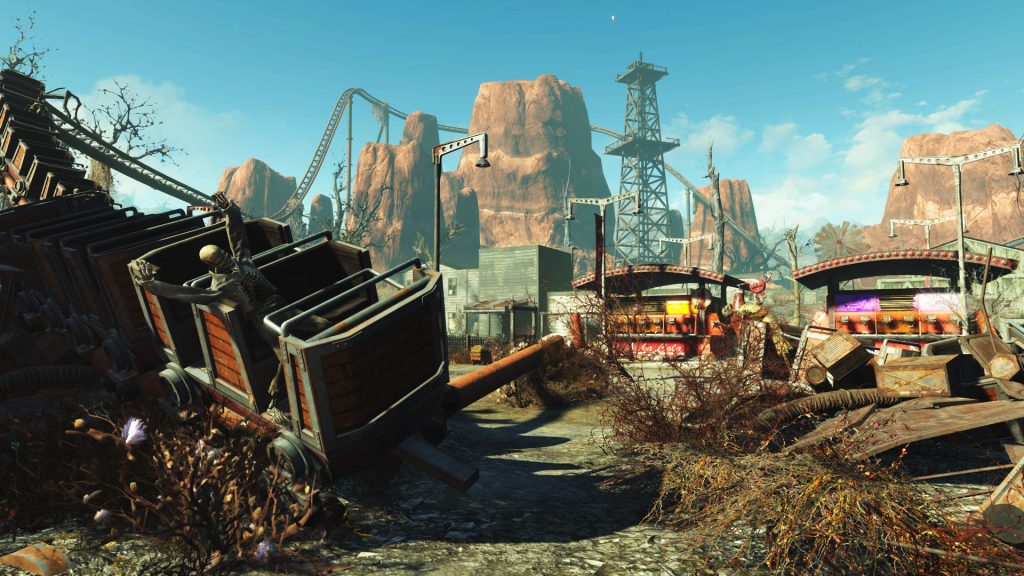 Fallout 4: Nuka-World provides approximately six hours of entertainment if you focus on the (meagre) main story and some of the better side-quests. With the optional quests, that number can increase to about 15 to 20 hours. After you complete the main story if you have just about seen everything so going back to the same place three more times can get very repetitive. In saying that, there are exclusive rewards such as the Nuka-Cola inspired power armour for those diligent gamers who commit themselves to exploring every inch of the wasteland. You can also find plenty of Nuka-Cola varieties and produce your favourite brew.

Another cool feature that you will come across from time to time is tokens. This lets you play the Whack-a-mole, or shoot at moving targets to win prizes. You can also participate in the draw for a grand prize. Most of the time you will only come across one or two but there are huge rolls of 1000+ tokens hidden around the wasteland.

The RPG focus of Far Harbor has been lost on Nuka-World. Only now and then do you get the chance to talk to a potential enemy and persuade them one way or another. Not even the fractions add variety to the game because the Raider groups primarily do whatever you say regardless of how you interact with them.

As master of a horde of evil Raiders, the management of settlements changes in the Commonwealth. You can now take villages by force of arms, money or threaten them to leave their land to your bandits. This adds a lot of replayability for those who want to replay the main story and all the DLCs as a Raider. The acquisition of existing settlements in the Commonwealth, however, is extremely cumbersome. For the first few outposts, you must repeatedly travel back and forth between the commonwealth and Nuka-World to speak to a specific Raider. The result is a lot of unnecessary load times when changing areas.

There is also a new district to house your growing Raider empire. The new Raider Outpost generates recurring revenue, but I personally find this to be a pointless feature. After the completing the main Fallout 4 story I had enough settlements and shops to provide more bottle caps than I could ever need.

Fallout 4: Nuka-World is available from Steam, the PlayStation Store or the Xbox One marketplace. The price is about 20 Euro.