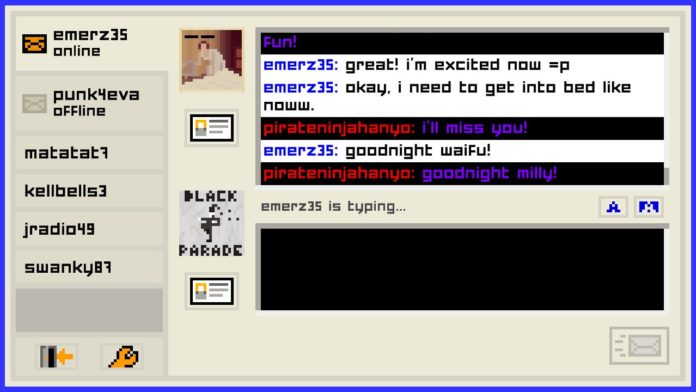 The year is 2006: Punk rock is cool, instant messaging is still a relatively new thing, and MySpace and Facebook are laying down the foundations of social media. The way that people communicate is about to change rapidly–but not quite yet. This sets the stage for Kyle Seeley’s Emily is Away Too (henceforth “EIAT”), an interactive narrative about…boy troubles.

Where EIAT succeeds in most is the incredibly creative ways in which it immerses you in its setting: Your Senior year of high school, 2006-2007. It’s nailed the look of an early instant messenger–right down to letting you pick your own screen name, icon, and profile description, and even goes so far as to give you links to “YouToob” and “FaceNook” that not only function, but look the part. You can explore the websites the game makes available to you on their website.

Most of the game takes place in the instant messenger–EOL Online. You have 2 friends to talk to–Evelyn (punk4eva) and Emily (emerz35). In each of the 5 chapters, you’ll learn more about them in a conversation about their personal life and relationship problems–and even try to help them solve their problems by choosing the right responses.

Unfortunately for this game, regardless of how (or if) you help them, neither of their stories are very interesting. One of them is lamenting an ex she struggles to cut out of her life, the other is simply no longer satisfied with her current relationship. Both stories are tragically anticlimactic and rely heavily on the player connecting with either Evelyn or Emily and generating concern for them as a person would be if these things were happening to a real friend. Luckily for EIAT, Evelyn and Emily are both made to be gripping characters…most of the time. Less luckily, what few side characters there are (Jeff, Steve, Kelly, etc.) are written with little to no consistency or care, and are simply placeholders for “Jerk boyfriend 1”, “Jerk boyfriend 2”, and “Other friend” respectively.

[Spoilers in the paragraph ahead, skip to the following paragraph to avoid them]

When Emily tells the player that she’s been drinking in the third chapter (after having just told the player that she never drinks) it’s indicative of a larger problem in her relationship–one that we ultimately discover she just doesn’t have. Jeff is manipulative, but to what extent? The player never truly finds out, as his only “manipulative moment” we see (his telling Emily about how he couldn’t imagine life without her) is revealed by him that he didn’t mean to be manipulative, and merely said out of frustration. It’s not only a complete contradiction of Emily’s character to start drinking for seemingly no reason (read: “I know I said I don’t drink, but my boyfriend’s acting the same way as he always does and at this point in the story, I have no incentive to stay with him, yet I still choose to! Woe is me!”) but it’s also never a point in the story that sees any closure. We never find out why she was drinking exactly and it’s never addressed again. Moreover, she sobers up very quickly into the conversation. Therefore, the fact that she was drinking is completely irrelevant. Was Jeff coaxing her into drinking? Are her problems worse than she’s revealing? We’ll never know.

More than anything, EIAT feels like a few clever gimmicks that should be part of a much larger narrative rather than be its own game. It’s a narrative game, yet the narrative takes a back seat to throwing you back to 2006 with some nostalgic music and website layouts. It’s character driven, yet the characters aren’t always written with consistency. It has external outlets to let you learn more about given characters (FaceNook), yet it reveals very little that we don’t already know. It’s a game that still needs its narrative to be more fleshed out, but is off to a good start.

More than anything, EIAT exudes charm. All the technical and visual aspects are spot-on. Its lead characters are heartwarmingly realistic. Conversations between the player, Evelyn, and Emily flow very naturally. The message of this game–change after high school is inevitable, but it doesn’t have to be scary–is a wholesome and true one that’ll tug on the heart strings of many. If it would only let itself commit more to its narrative, if it would only take itself a few steps further, it could be brilliant. But for its $5 price tag and 2 hour play time, it’s hard to say no to this charming yet empty narrative.