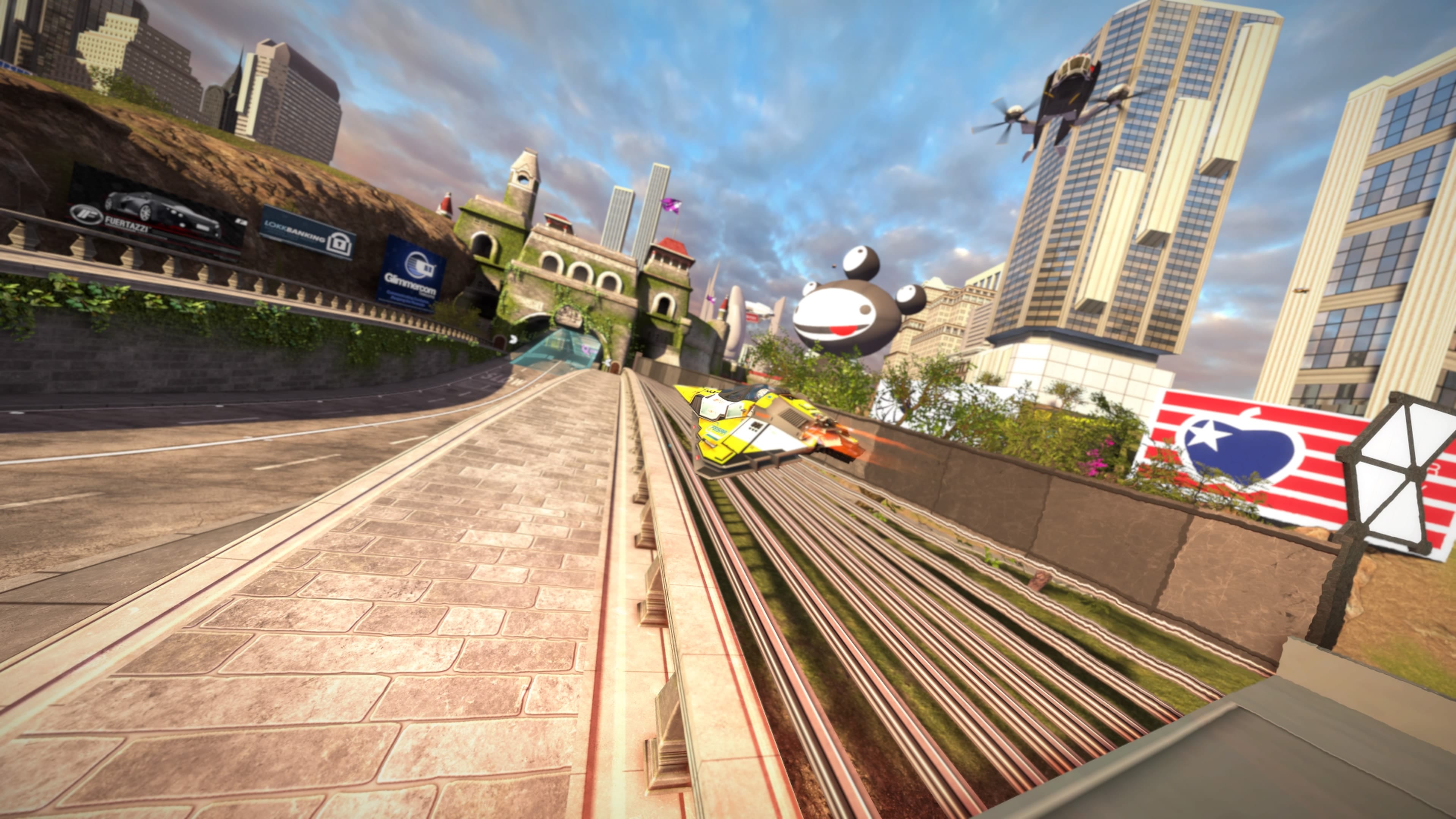 Back when Sony’s OG PlayStation was the coolest thing to emerge from Japan since the Walkman, WipEout was one of the main reasons. It’s slick presentation, techno soundtrack and use of symbols and infographics gave it a mature feel that teens craved and adults didn’t ‘grow out of’.

WipEout Omega Collection could have done with a bit of editing to keep the single player on-track. Pun wholly intended

WipEout’s appearance in contrived then-thriller, now-comedy movie Hackers and its presence in nightclubs up and down Britain made the game cool in the run-up to its release. WipEout Omega Collection takes two of the later titles (and a DLC), updates them visually and aurally and gives the package nice contiguous feel.

The first thing you will notice about WipEout Omega Collection is the menu style – it’s beautiful. Every visual note that the original series struck is chimed again but in 2017 4K fashion. The sheer volume of challenges that make up the entire game comes next.

The game includes a ‘pilot assist’… but it wrests the control from the player in an obviously artificial manner, perfectly guiding you around most corners by riding the rail

On the track, WipEout Omega Collection is the loose, floaty drive it should be with some momentum conservation and judicious air-braking going a long way. The weapons are useful and have appropriate stopping capability vs rarity. Many of you will have preferences for offensive or defensive pick-ups after a short play-time but none are duds. Your vehicle can explode if your energy levels hits zero but pick-ups can be absorbed to replenish.

A Map Mode in Heaven

Weaponised races often have different load-outs available and vehicles will have varying strengths to the pick-ups. For instance, a faster Feisar fire one rocket while a combat-focused Xirex fires three – this adds a level of strategy to the most common event type in the campaign.

Other modes were far from afterthoughts. The single-lap challenges give a player a set number of laps to hit a target. These are tense millisecond-shaving sessions that are also ample practice for later events which become cripplingly difficult. Gulp.

Eliminator is pure combat. Points are awarded for successfully hitting an opponent with a weapon, siphoning their health or completing a lap – the need to balance defence and attack with speed is quite taxing. The weapon-set varies which adds some variety and more strategy to the mode. Oh, and the later events become cripplingly difficult.

Zone mode puts a brick on the accelerator and hallucinogenic drugs in your TV. A player is fired around a neonised track and with every passing ‘zone’ our vehicle’s class increases. The concentration required combined with the shifting glow can mesmerise the player until he/she looks at their score and proceeds to spill and lose all their energy. This hypnotic trance that finds a player ‘in the zone’ (intended) unfortunately gets shorter as the game progresses and Zone stages become cripplingly difficult.

Other modes like Zone Battles, Tournaments and Time Trials are less common and largely a variation on better modes but they are worthy inclusions nonetheless.

Turning the difficulty down after 15 hours just feels wrong; as if the cruel upturn in difficulty is exposing my mediocrity. Insults can be left in the comments below

The game spikes in difficulty towards the end of each of the three campaigns. This skirts the line between ‘challenging’ and ‘unfair’ and eventually encouraged me to turn the difficulty down. One small mistake can leave you in the dust with no hope of recovery while perfect laps become rarer.

Turning the difficulty down after 15 hours just feels wrong; as if the cruel upturn in difficulty is exposing my mediocrity. Please direct your insults to the comment section below.

The game includes a ‘pilot assist’ which is for n00bs and almost flies the vehicle for a player. I tried it, assuming it would be gentle but it wrests the control from the player in an obviously artificial manner, perfectly guiding you around most corners by riding the rail.

As a combined remix/remake, WipEout is a double-edged sword. Everything seems to be here which is laudable. However, there just aren’t enough tracks to justify this many events. While 26 tracks sounds like a lot, a player will tire of the easier tracks that they will play in the earlier parts of all three game modes.

The tracks themselves are well-made and can be exciting but playing ‘Moa Therma’ for the twentieth time ruins it. WipEout Omega Collection could have done with a bit of editing to keep the single player on-track. Pun wholly intended.

Online is an area where WipEout, the OC (don’t call it that) is less flawed. Matchmaking is done on an open host/join format that speeds things up but doesn’t do much for fairness. WipEout believes that getting spanked is the best way to learn in these types of games. This gamer agrees and when I eventually found that first victory after twelve online races, it was quite special. 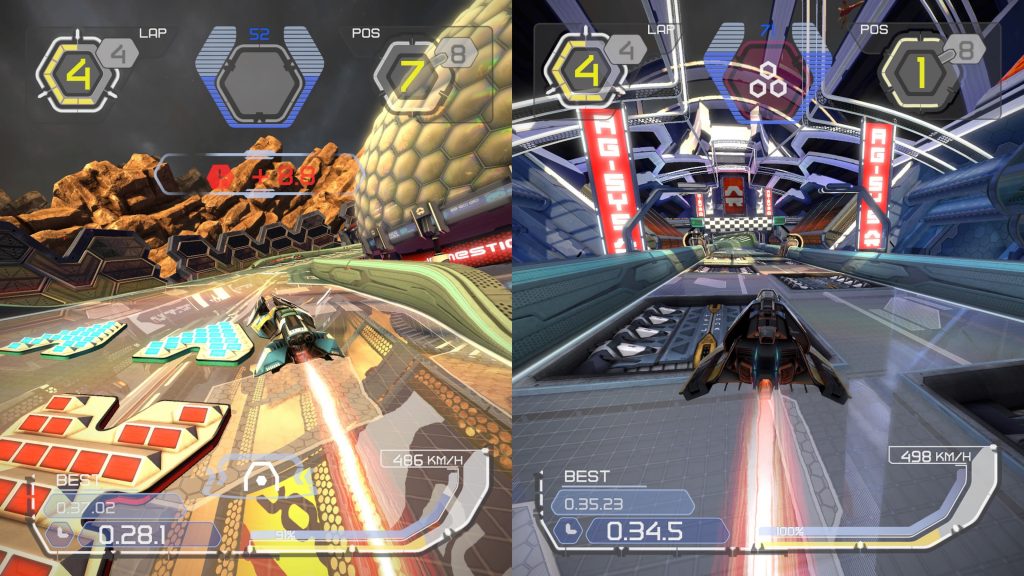 Similarly, couch MP is still a great experience. Vertical or horizontal, it looks amazing and plays exactly like it should. There are plenty of tracks available to get a group of friends over for a game and a few more to unlock for ‘Racebox’ during the campaign.

The game teases out unlockables throughout the campaigns and this doling out of content will keep most players interested longer than they would be otherwise. However, it all comes to a halt in the aforementioned later sections of the campaign. There are several crucial events where you won’t have a competitive ship and have to unlock one elsewhere. Combined with the oft aforementioned difficulty spike, the end game can be a chore. 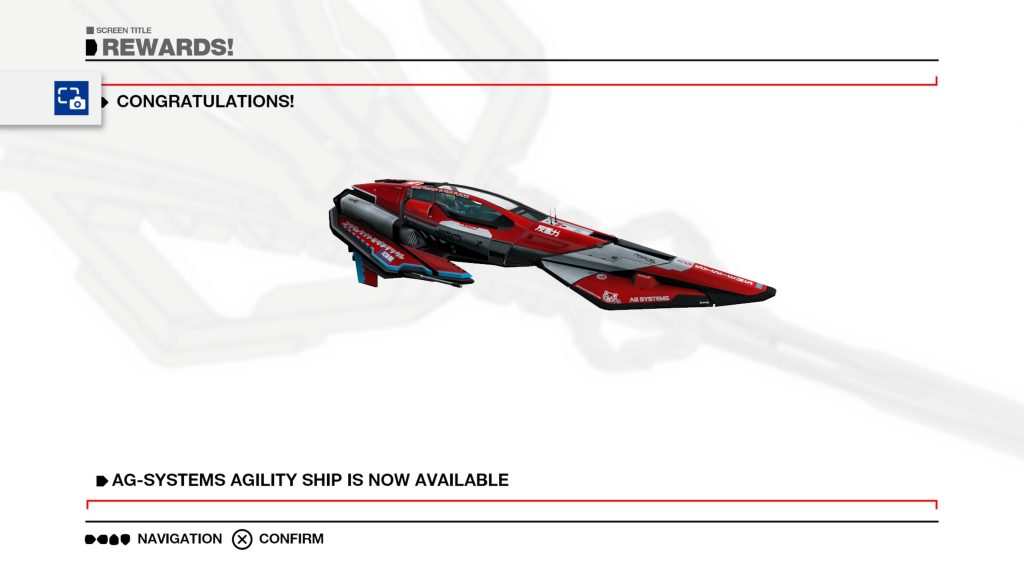 As a sexed-up remake of two well-received WipEouts, the OC (don’t call it that) is probably the finest demonstration of 4K in the PS4 Pro’s line-up. The lush models and futuristic backdrops of WipEout Omega Collection are gorgeous. WipEout Omega Collection is an excellent update of a beloved franchise but the game’s deceptive velocity and campaign difficulty only make themselves truly known to the player when you hit a wall. (Metaphorical and literal meaning intended)