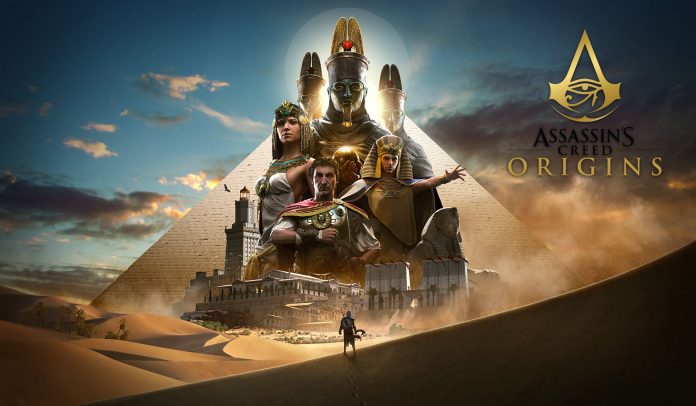 One of my favourite titles at Gamescom so far was Assassin’s Creed Origins, a game that so far, has broken a lot of reoccurring elements in the series. Firstly, there is a two-year gap between Origins and its previous title Syndicate. Secondly, it’s the first Assassin’s Creed game that doesn’t follow the linear path towards the modern era. Ubisoft did something quite similar with the release of Far Cry Primal and it worked well despite some concerns prior to release.

The Gamescom demo gave us “Memphis”, once the capital of Egypt. It is a busy, varied city with countless sandy coloured houses and some impressive palaces and other buildings. The city has several calm streams, where people sail in boats and wash themselves, and farmers use all kinds of wooden mills to lock water to their crops. The city is surrounded by beautiful farmlands where workers are busy in the weather, and beyond, of course, the desert, with some impressive pyramids that rise above the horizon.

The protagonist in this series is Bayek, the last Medjay. These warriors were once the “secret agents” of the pharaohs but no longer have a place in this ‘modern’ Egypt which consists of more and more Greeks and Romans.

The mission waypoint is reached by a reed boat, typical of the historical era of the time. The mission starts with meeting Bayeks wife, Aya. The mission revolves around a sacred bull that is dying, which makes the locals think it to be cursed by the gods. Bayek and Aya, both in charge of protecting the powerful and beautiful Cleopatra, search the surrounding area for possible causes.

Pressing a button automatically scans a so-called ‘research area’, which identifies various objects and places relevant to the mission. Bayek can interact with these objects and locations to solve the puzzle.

We find out that, of course, it’s not a curse at all, but the food is poisoned in the nearby storage room. When we bring the news to Aya two sisters admit they are responsible. After interrogating them for a bit I learn that a priest forced them to do this after he abducted their brother and held him in his temple. They then produce a severed finger.

I now have two options, I can let Aya kill the two sisters or I can convince her that they had no choice. I choose the latter because I’m actually a nice guy after all.

I now get a look at a newish mechanic — Senu, an eagle that I can use to scan the area. Players of Far Cry Primal will feel at home here as this mechanic was a big part of the game. The player can only activate Senu while in a safe zone and if they are discovered while in flight the screen will flash notifying the player that they are in danger and that they should revert back to Bayek as the player can be killed.

Using Senu, I fly around the area and scan everything, to find visible enemies and your target, in this case, the brother I have to save. This is one of the highlights of Assassin’s Creed Origins, not only is it a good way to get an overview of a mission area and the dangers involved (not to mention the beautiful views), but it also lets us freely observe and analyse the game world from this point of view. The upside to this is that it makes infiltration missions a little easier.

When I get the fortress, I use my bow from a distance to take out the guards on the wall. I then manage to get kill shots on two of the guards on the ground before I am detected. The thing I love about Assassin’s Creed Origins is that when I was aiming, the health meter shows how much damage I will do while focused on a particular area. Naturally, I went for head shots but this is really handy if headshots aren’t an option at the time.

The new combat system is a refreshing improvement, you can put in various light and heavy attacks and have much more freedom to hit enemies. There’s a bit of a learning curve, especially for veteran Assassin’s who are used to the older controls, but once you break yourself in it’s a treat!

Eventually, I take them all out and reach the injured brother. I have to carry him back to Aya and the two sisters at a slow pace through various bushes and other sheltered objects to make sure I’m not spotted by any more guards.

Once the mission is done, I have about 15 minutes for a random side mission or exploring Memphis and the surrounding area.

Upon opening the world map, I see that Memphis covers only one region of an even larger area with at least a dozen similar regions; The game world of Assassin’s Creed Origins is gigantic. Various open-world games have proved that this is absolutely no guarantee of quality, but if Memphis is a sign of the complete game world, I can not wait to explore the rest of the areas.

Now, obviously I’m going straight to the pyramid, it’s an excellent final destination. I mean what sane person would miss out on that opportunity? Pressing up on the d-pad calls a horse and I’m off to explore the pyramid. 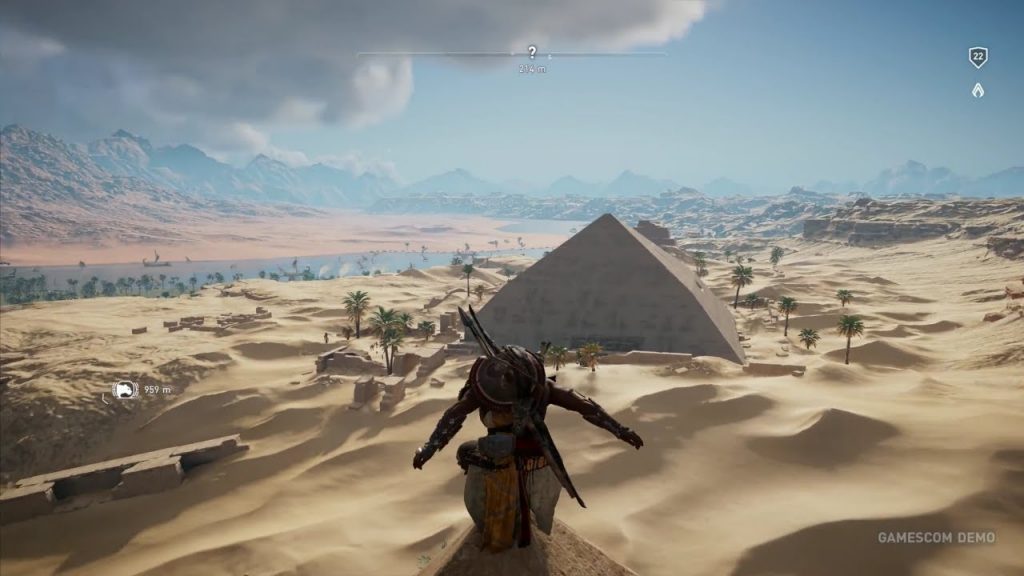 I find an opening in the triangular structure and I crawl inside. Pyramids and other similar old structures in Assassin’s Creed Origins provide a whole new gameplay experience, similar exploring mysterious areas in the Tomb Raider or Uncharted series. I manoeuvre along narrow gaps in walls and get to an open area with my first puzzle — multiple platforms with weights scattered about.

To solve this puzzle I had to place the weights on different platforms to first lower them to climb up and then to raise it to an elevated doorway. Surprisingly it didn’t take too long to figure out and before I know it I’m thought he door and finding the treasure. Chests like these contain different items used for levelling up throughout the game. this handy if you’re stuck in the campaign and need a bit of a boost every now and then.

With the few minutes I have left, I head back to the city of Memphis and explore a little bit. Once I get there a young kid ran past me and I heard the quite familiar “Stop, thief!“. Being the wondrous hero that I am I turned and chased after him… Straight into a den full of murderous thieves. Pretty sure there was about 8 of them so out into the open I go to give myself an advantage while I fight them off.

Suddenly I run into the Egyptian army, and the two factions fight each other instead allowing me to pick them off one at a time. One of the devs told me that so far, no one playing the demo had thought of doing that. Of course, I put it down to my Elite Gamerness and not cowardice at all!

This last fight is what convinced me on the new combat system, it’s smoother, much more refined and I found it much easier to move around my opponents as I fought. The new weapons are also a lot of fun, my personal favourite was a type of club/ hammer that downed enemies with a sleek “finisher” animation.

Assassin’s Creed has never been so atmospheric and inviting to adventurers. I truly can’t wait to get my hands on it in October! Are you excited for the new Assassin’s Creed Origins release? Let us know in the comments!

This is the first Assassin’s Creed game that I have been interested in…. I heard the pirate one was really good but I don’t care about pirates so I didn’t buy it…. I will get this when I pick up the Xbox One X in Dec/Jan