With the Guinness Six Nations currently about to reach its thrilling conclusion, we thought that now would be the perfect opportunity to look back on the less than stellar history of rugby games – with a few notable exceptions.

It seems odd to me that rugby union does not have a playable release given that sports like golf and Formula 1 do. Even cricket has a decent game. Yet one of the most played and watched sports on earth has been poorly serviced for an entire decade.

Not since the days of EA Rugby 06 and 08 have we had a game with the whole package of good gameplay with acceptable graphics and commentary. Games that belatedly assumed the role of crème de la crème of rugby games from Jonah Lomu Rugby. A game that serves as the greatest of tributes to the phenomenal player and human being that Jonah Lomu was.

We’ve had rugby games released since those heady days like the official Rugby World Cup games and Rugby Challenge games. But these instalments pale in comparison to EA’s line-up and Lomu.

Let’s start with the lowest point. Licensed games tied to movies or sporting events are rarely developed well and improvements over previous games are negligible. They’re usually rushed out to meet a deadline and contribute nothing except our cash to big developers.

The Rugby World Cup games are a prime example of a money grab. You’d think that there’d be an upgrade in graphics or more realistic gameplay mechanics between the 2011 and 2015 editions. Alas, you’d be dead wrong. Rugby World Cup 2011 & 2015 is an almost identical gaming experience. What makes it even more infuriating was that RWC 15 was made available on current-gen consoles, making it a cross-generational disappointment.

The one major area where developers like HB Studios have struggled is the defensive line. It seems that nobody can find a way to make the AI move around naturally and instead they seem to congregate around the ball or run around like headless chickens.

Another factor as to why I dislike these tie-in games is that they often fail to gain exclusive rights for crests, shirts, stadia and on certain occasions, player names and likenesses. This happened when Rugby Challenge was released in 2011. It didn’t include the official strip/emblem/stadium/player likenesses of England, South Africa and France, and the official strip/emblem/stadium of Wales, Scotland, Ireland and Italy. Gone are the days of a rugby game having official licences for every major tournament.

Sports licensing is big business these days but the biggest sums rest in areas where competition exists. There doesn’t seem to be much in the way of competition for the RWC series to acquire every single commercial detail of the elite level of international rugby yet they choose not to – a cynical penny-pinching exercise that has me pining for EA to bounce in.

It’s Been a Full Decade Since a Passable Rugby Title

Over thousands of years, many of humanity’s greatest innovations were buried ‘neath the sands of time. Greek fire, Damascus Steel and now, how to make a proper rugby game. I think we all agree that losing this particular knowledge is the most frustrating and also the most baffling.

One would have to wonder where the people who worked on EA’s quality fare or the Lomu anomaly went to. Who now holds the secret to adequate electronic egg-tossing?? Were they culled to prevent competitors from hiring them, taking the torch and tweaking the mechanics?? 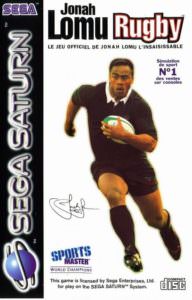 Even if they all retired after fulfilling their life’s ambition of ‘making Lomu Rugby‘ or ‘making a game almost as good as Lomu Rugby‘. Simply playing any of the exalted rugby titles would impart some wisdom as to how the sport can be conveyed in video game form.

Once Upon a Time…

Jonah Lomu Rugby somehow managed to fix almost every issue around rugby in video games in 1997 on DOS, Saturn and PlayStation.

The ball-whipped between players with sharpness. The defensive line distorted and stretched as you teased for an opening. The kicking was entirely intuitive yet understandably tricky. The act of cycling to a player you wanted to control was simple and worked. With an entire suite of first and second-tier international teams to chose from in a fully-licensed rugby experience.

Granted, it was incredibly ugly and the commentary sounded like answering machine messages engaged in a not-particularly-intense rap battle. But it did everything you could expect to see on a top-level international rugby match, just a bit quicker and a little more fun.

“Mercy me! What a tackle! That could’ve put him in Ward 4”

“I hope not Bill, that’s a maternity ward…”

But it was never followed up and stands as a beautifully-looped kick that was never chased. It took eight years for license-sucking behemoth EA Sports to get their act together and replace Lomu in spirit and in our disc-drives.

And finally, we get to what Thomas Telford considers the best rugby games ever made and from EA, no less. The creme de la creme of rugby games if you will. EA Rugby ’06 and ‘08 took over from Jonah Lomu Rugby in delivering the essential rugby experience. Fluid, all-encompassing and hard-hitting.

Of course, ’06/’08 were not exactly the perfect rugby games. There were issues around how ‘star players’ being almost impossible to play against; breaking tackles at will, able to run the length of the pitch in mere seconds. And like all rugby games, the defensive line still honey-potted around the ball. But it had a lot going for it, in areas where rugby games since just haven’t.

One of the biggest among these was the licensing. EA Rugby was the FIFA of the sport – with all the beautiful detail what we have come to expect from an EA Sports title. Every major annual tournament was included like the 6 nations, Tri-Nations, Celtic League, Top 14, Guinness Premiership, Super 14 and even a made-up tournament called the 10 Nations which combined all 6 major European teams along with the three Southern Hemisphere giants and Argentina.

Rugby 06/08 was such a huge step forward for the sport in video games. It included offloads which completely changed the way you could play the game. The commentary was also one of EA Rugby‘s strong points. The great Scottish voice of Ian Robertson returned as well as New  Zealand great Grant Fox and Murray Mexted.

So Why Are Rugby Games Awful Now?

I’ll admit that rugby isn’t the easiest of sports to develop a game for, there are a lot of moving parts and spinning plates to worry about. There are some comparisons to be made with the long-running Madden NFL series. Like in a rugby title, the AI needs to be completely different yet totally balanced for both offence and defence. There are sporting similarities like ‘lateral’ passing and a non-spherical ball. There will be huge disparities in model size with the complications that brings to collisions and animations.

What American football games have in their favour is the stop-start nature of the entire sport. Pick a play, execute 2nd down and repeat. Even 8-bit computers could manage a few seconds of NFL logic at a time for the on-screen players; just a few on-rails instructions to go with the chosen plays. 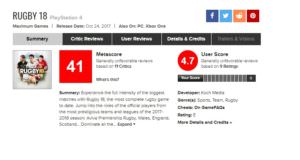 The flaws of such ‘on-rails’ AI in a rugby title are obvious within minutes of playing even 16-bit rugby offerings like International Rugby and Rugby World Cup 1995 on Mega Drive/Genesis. The three-button controller was actually the least of the player’s worries, the game had ruthlessly simple AI going forward and defending. Very difficult to begin with but they had several game-breaking strategies to discover, ending any challenge that the AI/less cunning friends could muster.

FIFA and Madden games have had years of development to refine the experience so now the general layout of every game in their respective sports is largely the same. (Compare Pro-Ev and FIFA)

Rugby games tend to come in fits and starts – devs have to create a control layout from scratch. Then, these new control schemes are dumped in a player’s lap without any time for refinement before the series dies; either from being too s**t or too good.

Presence of a Soul/Lack of Money

Another of the reasons that rugby seems to be less commercially viable is that it still has a soul. Jerseys last for seasons at a time instead of swapped out year-on-year; fairweather-fan powerhouses like Manchester United sometimes have special ‘European’ strips or FIFA series exclusive kits to really milk fans. The players aren’t cash-hungry mercenaries like association football, NFL or NBA players. A team’s line-up is not going to change drastically from season to season.

Once a game is good enough, there isn’t much need to upgrade for a few years. Jonah Lomu Rugby had it worse seeing it was an international team-game. Barring the worst retirement plague ever, nothing needed to change for about five years. Most of the same players in the same shirts playing the same teams in the same engine was just not going to entice customers.

This lack of regular releases causes a vicious cycle to spin up. With no guarantee that a rugby game engine will become an annual seller, there is no incentive to invest. If EA couldn’t turn enough of a profit to continue making EA Rugby, what chance did the next crowd??

Knock-on in the Final 22

It’s obvious that the last decade of rugby games were rushed, low-budget affairs. Such fan-exploitative tactics do nothing to help the sport itself nor their respective games’ chances of becoming an annual/biennal hit.

The reputation of the FIFA series of games means many people who are disinterested in sport enjoy its digital simulacrum. There are others who become fans of the Cambridge code through playing FIFA. It is easy to imagine that keeping the mind on a rugby game would funnel young minds to the sport itself.