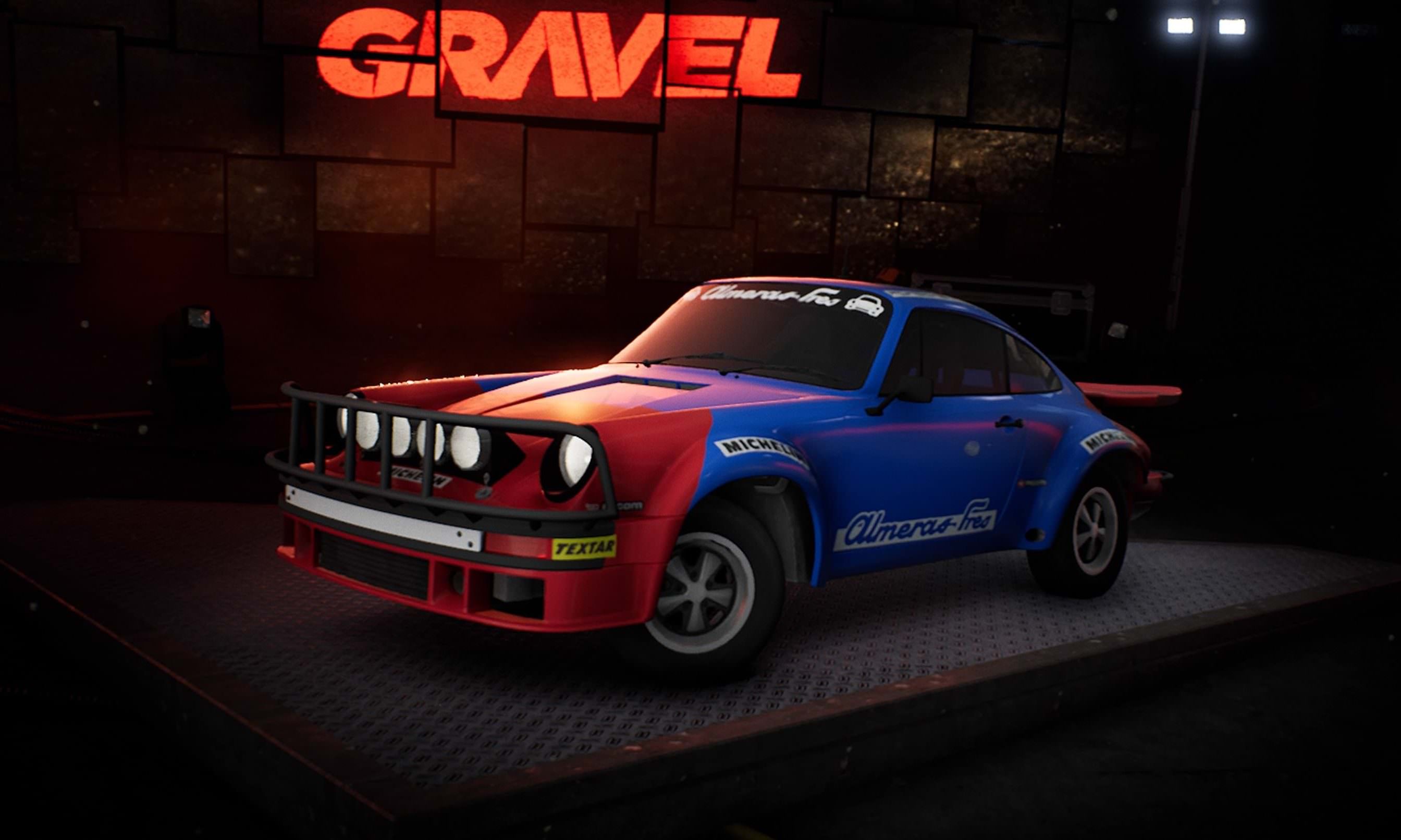 If you have been here recently you might recognise Milestone. The impeccably-licensed Monster Energy Supercross was a decent attempt at simulating an underserviced sport. With Gravel, the Italian devs have taken a different tack by aiming for an arcade-style rally/off-road racer carried by a delicious line-up of dirt-loving classics.

By avoiding a dry rally simulation in favour of a simpler driving mechanic and artificial ‘season’, Gravel tries to court a wider crowd. The game is mainly eight-car races with some time-trials, tile-smashing runs and other diversions. This variety helps break the racing up a little.

Handling is forgiving, especially while drifting. Gravel‘s vehicles have some oversteer at the type of speed you will usually corner at. Collisions are conservative; a healthy crunching noise and some passable superficial and/or performance damage but not much to discourage players from barging into everyone during the events. In fact, it is a nice change from frequently-punished horseplay of Monster Energy Motorcross.

Driving assists are present even if not as invasive as Forza 7 or Project Cars 2. But they will smooth out the ride for the complete n00bs who need them. The simplified mechanics of Gravel don’t really need the training wheels of the drier sims.

Driving aids like traction control and ABS should suffice for most players with any type of racing game pedigree. There is also a brief ‘rewind’ function for players to abuse should they wish but most players will forget it exists until after it is too late to use it.

Gravel has an excellent variety of road, mud and sand locales to race in along with some real rallycross tracks. Each of the 18 locations has a combination of tracks and race types associated with each track. These include expansive A-to-B courses with slalom gates directing a player, tighter circuits, board-smashers and elimination races.

There are over 50 vehicles to be unlocked in Gravel. These are broken up into around a half-dozen categories. Most of Gravel‘s line-up are instantly recognisable cars or jeeps and come with a range of absolutely disgusting unlockable alternate paint-jobs. These vehicles are tied to certain events in the career mode so a player will be forced to take a spin in all categories.

Gravel features a set of fictional drivers that act as bosses during the career. Each one has a different, arrogant personality and a thin backstory. These events are usually a set of three races against said driver alone. After a few of these, they stop being all that memorable due to the samey driving and serve as more of a break from the eventual boredom of the eight-car races, time-trials etc.

The lack of mechanical variety means the career runs out of steam despite the spread of vehicles, locations and event types along the 6-10 hour journey

The AI is most of the challenge in the single-player modes of Gravel. At medium, they are beatable within a race or two thanks to the forgiving controls and largely unchallenging courses. Stray beyond medium and the game begins to show its dark side.

Much like Supercross, the AI seems bent on destroying you rather than trying to race. The other racers will fishtail you, drive you out of corners and try get under you after jumps; this old-school racing ‘bullying’ that is best left in the coin-hungry arcade machines of the 80s and 90s. The ‘masters’ drivers are more aggressive on higher difficulties but having only one other racer to worry about evens this out.

The online multiplayer is not particularly developed but it works really well. This impatient reviewer wasn’t waiting long for races nor was there excessive faffing about waiting for others to ready up. You can barge your way through opponents for a second until you both become ghosts temporarily. Combining this with Gravel‘s forgiving collisions, the rough and tumble is balanced nicely with player skill while online.

There were occasions where other players’ connections were poor but while they flitted about the track endlessly, they too were ghosts incapable of causing any more pain than was necessary.

Vehicle renders aren’t generally up to 8th generation standards. The headlights appear painted on some cars. The models do not look good in the game’s underdeveloped photo mode, lacking the sharp textures and glossy lighting effects of a AAA title.

The environments on the other hand are much better, the variety in locales is backed up with attentive course design. The lush greenery and hazy sands of the rally-style courses are gorgeous. Some of the course furniture is delightfully cheesy; one can always rely on a set of hot-air balloons and an amusement park somewhere in a racing game.

The frame-rate is not as solid in the expansive stadium-style maps of the game. The crowd and arena geometry are a little too taxing for Gravel‘s engine, even on PS4 Pro, with frame-burps and turn-upsetting lag rearing their ugly heads right when you need it least.

a lot of gamers worldwide won’t be as excited for a toyota Celica, Lancia Delta or a Suburu Impreza

Possibly Too Arcade-y in Some Respects

Despite the different cars and surfaces of the game, most of handles all handles very similarly. The heavy Hummer doesn’t seem that different from a VW-beetle. Front, rear or four-wheel drive are similarly hard to tell apart. Gravel‘s vehicles only seem to vary in take-off, acceleration and top-speed.

The courses’ surfaces don’t really affect handling enough. Snow, ice, mud and sand are slippy and drifting is frequent. Tarmac is less so and that’s all there is to the surface-tyre interface. The lack of mechanical variety means the career runs out of steam despite the spread of vehicles, locations and event types along the 6-10 hour journey.

Rally and cross-country racing are not universally popular sports. While rally racing may be ‘mainstream’ in Western Europe and Scandinavia, a lot of gamers worldwide won’t be as excited for a Celica, Stratos or a Suburu Impreza.

The inclusion of American trophy trucks was probably more of a welcoming wink to Canadian and US gamers rather than filling a particular racing need. These heavies don’t really handle all that differently from lighter vehicles and the idea of racing anything in a Hummer is probably more hilarious than tantalising to most people who are into motor racing.

The underwhelming driving and Jeckyl and Hyde AI will disappoint ‘arcade’ driving fans. Sega Rally, this is not. Fans of the machines however, will find value here with its excellent line-up of vehicles and a healthy set of locations to admire them in.