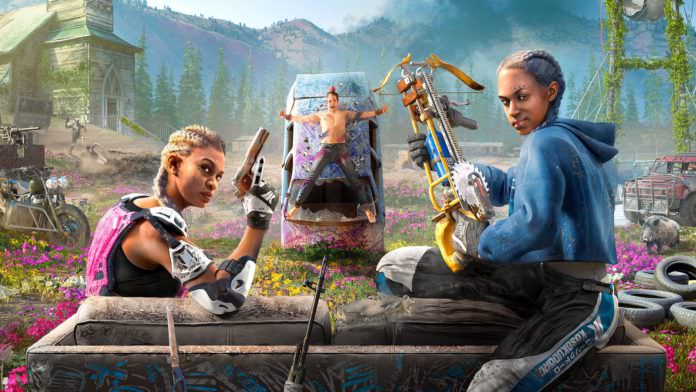 With Far Cry New Dawn, Ubisoft delivers a new twist to the milked-out concept of the post-apocalyptic adventure. Instead of the clichéd weathered cities and barren wasteland, we get a world of splendou covered in colorful flowers and plants.

The adventurous first-person shooter takes place 17 years after Far Cry 5. We are back in Hope County, a fictional area in the American state of Montana. While the open world looks completely different, it is full of landmarks and winks for gamers who played Far Cry 5. We are also reintroduced to some of the characters from the previous game, although they have obviously aged a bit.

The plot to Far Cry 5 focused on taking down a Christian cult who were taking control of more and more of the area. Far Cry New Dawn shifts this focus to post-bomb Hope County. The few survivors have emerged from their shelters and are trying to rebuild their lives and homes. Of course, you also have people who want to disrupt this new harmony. Meet Mickey and Lou, the twins that are the bad gals you will be fighting in New Dawn.

The enemies aren’t that memorable, you don’t see much of the twins outside of cutscenes and chatter over the radio anytime you finish a main quest. The “infantry” as it were are generic enemies that will shoot at you if they spot you and essentially wear the same outfit with minor changes depending on what type of weapon they have. After a while they begin to feel repetetive and annoying without adding much weight to the game.

Don’t worry too much about that, because the game focuses mainly on carefree entertainment and the huge open world to explore. Although it is somewhat smaller than in the predecessor, Ubisoft fits in some nice novelties. You can use a helicopter to go on ‘expeditions’. These are essentially side quests that take you to some new interesting locations, such as a large aircraft carrier or a derelict amusement park.

Naturally, Hope County has many outposts that you can conquer, with extra rewards if you manage to claim them while remaining undetected or setting off any alarms. Whats new, however, is that you can “salvage” outposts and get ethanol for them. Fuel is the most important means of payment in this hard world – although the value of duct tape should not be underestimated. You can do this twice, each time adding an extra alarm and more difficult enemies. Level 3 outposts will also have a “master” enemy that needs to be taken out as well.

Just like previous games, Far Cry New Dawn has plenty of weaponry available to the player. Most of the weapons are fairly typical of far Cry games, but the “saw launcher” is a new addition. This is a makeshift crossbow that fires rotating saw blades that bounce on impact meaning it can be used to take down multiple enemies at once. The “roster” is back giving you access to plenty of characters that can come fight by your side. If you have an animal companion, they can now even sit in your car instead of running behind it.

One of the main differences between Far Cry 5 and New Dawn is the importance of collectibles. Far Cry 5 had a lot of collectibles such as bobble heads, baseball cards, comic books, Vietnam lighters and vinyl crates. Finding all of these did unlock some dialogue but it didn’t really offer anything. The vinyl crates, however, did unlock more music tracks to the car radio, similar to the walkman collectibles in New Dawn.

As mentioned previously, duct tape is your best friend! You need LOTS of this to upgrade your weapons. A considerable part of the gameplay is involved in the extraction of plants, looking in corners for gears and the emptying of preppers bunkers. At no point did it feel like I was ‘grinding’ for my upgrades. I always found everything I needed to upgrade as I went through the story, and at times I even had more than I could carry. I also found a lot of items during ‘random’ encounters which always kept my inventory full since few games are so chaotic as Far Cry.

It’s like this: every time you’ve set your mind on something, you can always bet that the game is going to tempt you to do something different. If you want to conquer a base, a valuable animal will parade in front of you. If you decide to hunt that moose, a big tanker truck full of ethanol will pass by. And during that chase you must firmly resist a few other temptations.

One of the downsides is that your main base, John Seeds cabin from Far Cry 5, is located at the bottom of the map which in combination with the new light RPG system prevents you from straying too far into the open world early in the game. Enemies and weapons are in a few classes, with the result that with weaker weapons you won’t be able to take on stronger opponents further from your base. However, you have less trouble with the lower difficulty.

A big advantage of a spin-off is that the game is almost spotless when it comes to bugs, even without the ‘day one’ patch. The voice acting is also top quality and does a great job of building up the atmosphere of the game. The music is another aspect that has clearly had a lot of attention from the developers. As I mentioned earlier, finding the Walkman collectables will unlock additional songs for vehicle radios. Bands like Die Antwoord offer the perfect soundtrack to rage through Hope County.

That Far Cry New Dawn at release is cheaper than the previous games, this is probably due to the content that is offered. Hope County still looks beautiful, but feels somewhat empty due to a lack of activities and sights to keep you busy. Moreover, the game lacks the characters and expectations that have been built with Far Cry 5. Although New Dawn remains quite entertaining through smooth combat and the graphics, the other elements are a step backwards for the franchise.