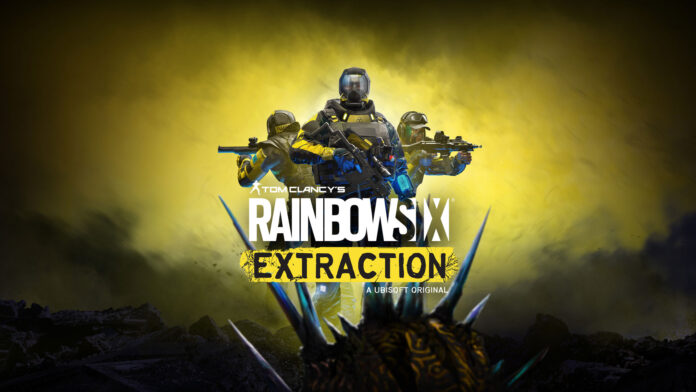 Originally, Ubisoft had planned to call this title “Rainbow Six Quarantine”, however, you can probably see why they chose to go with Rainbow Six Extraction instead. With the global pandemic taking the front row for every topic of conversation, some of us want to forget real life for a while and blast apart some aliens, these creatures are called Archaeans. I teamed up with two of my buddies to take a closer look at this extraterrestrial phenomenon and find out why these beings are coming to our planet. Read on and join us on our alien adventure.

On the road with friends

If you are looking for an in-depth story, this is not the game for you. It’s not much more than ‘we are being attacked by aliens and have to investigate where they come from’, although you can find some depth in the Intel you unlock along the way. This is a Rainbow Six game, and just like Rainbow Six: Siege, the developers give us just enough story to add some depth to the shooting action. In teams of three, you will attempt to complete three missions on different maps, which vary from parasite-infested Liberty Island to a snow-covered scientific base that is somewhat reminiscent of John Carpenters The Thing.

The missions start off “relatively” easy but gradually get a lot more difficult, until you have to use all your skills as a team to escape the danger zone alive. I say relatively because this depends on your experience with these types of games. If you came from Siege you will feel right at home, however Call of Duty players might have a more challenging experience due to the lack of player respawn. Rainbow Six Extraction is anything but a ‘walk in the park’. One minute you think you’re doing the right thing, the next you’re surrounded by alien hordes and you have to fight for your life. In terms of difficulty, it is very similar to Rainbow Six Siege.

The aforementioned three missions are different each time, as they are randomly selected from a list of thirteen different types. They range from finding and defusing an alien beacon to destroying elite Archaeans who are beginning to pose a little too much of a threat. One that is often discussed anyway is the mission called MIA – in other words: Missing in Action. When your Operator dies, it remains – swallowed by alien vegetation – in the level. It’s up to you to get him or her back, an intense operation where you can even use eyes in your back as a three-person team. So there’s really no shortage of variety, although it does start to feel a bit monotonous after a while. The approach is pretty much the same in most missions: you try to stay hidden from the enemy for as long as possible, after which you – after all, sooner or later you will be spotted – go guns blazing. Some players will get tired of this faster than others.

An extra endgame mode – read here more about the Maelstrom Protocol, a mode where you’ll have to complete not three, but nine objectives per mission – and announced post-launch content should help. Whether all this is sufficient, the future will show. The social aspect also keeps you glued to your screen for a long time. At higher difficulty levels you will also find mutations, which add something extra to the gameplay. For example, all enemies may have so-called ‘blinding spores’ on their bodies, which can jump to your Operator if you get too close. Your teammates will then have to quickly blast the spores away from you before they explode and not only damage you, but also ruin your view. As you unlock more maps, you will encounter new enemies.

All around me are familiar faces…

The enemy AI ​​isn’t bad and comes down to most types, when they see you they’ll yell for reinforcements and then they’ll run right at you. This ensures that you have to be careful that you are not suddenly overrun by these unwanted visitors on our planet. What are you going to attack these creatures with? For players of the Rainbow Six Siege game, the different Operators are of course already familiar, but for the new players we would like to emphasize that all Operators have their own identity: they look different, carry unique weapons and also their special skills differ.

For example, Sledge can demolish certain walls with his sledgehammer, while Alibi can put down a hologram that puts enemies on the wrong track. Each Operator has its own strengths and weaknesses, and soon you’ll have some favorite fighters to take out with. It is important to choose the right Operators for the type of mission and to base the composition of your team on that, so that you can support each other effectively. For example, one Operator may be more useful than the other per situation and it’s up to you to find the perfect composition per mission – maybe Tachanka (The Lord) is useful now…

What Ubisoft has done well is ensure that you will use many different Operators, because injuries you take during one mission are permanent and carry over to subsequent missions. Unless you leave the Operator at home for a mission, because Operators who stayed at home get some health again after a completed mission. But by the time a badly wounded soldier is back to full strength, you’re already a few missions away. You also have to retrieve the soldiers who go MIA in the next mission as they are not an option to choose from in the roster. If this doesn’t work, your character loses XP and can drop a level again.

This ensures that you do not play recklessly and that coordination with your teammates is crucial. It also means that sometimes in difficult situations you only have a few seconds to make important decisions. Will we recover our fallen teammate before we flee or will we defy fate and try to complete this mission? Besides the variety in weapons, the range of gadgets is really a nice lot of toys. From regular grenades and claymores, to deployable walls that stop projectiles… something for everyone! Several new gadgets are unlocked by leveling in general, but you can also level your Operators separately, unlocking new weapons for them.

The game also manages to score technically: the audio design does a good job, for example, to inform you of where to expect enemies. Furthermore, the screams of an enemy who spotted us already sends a negative feeling through our bellies, which means that you can really empathize with the apocalyptic world that Ubisoft has created. We played the game on the PlayStation 5 and were able to enjoy a 4K resolution at 60fps, which really showcases the gameplay. The game doesn’t look earth-shattering compared to the current standard, but compared to Rainbow Six Siege it is a significant improvement in graphics. Partly due to the more lavish implementation of lighting, which makes textures stand out better, among other things. This makes for a more polished presentation in terms of graphics.

As for the gameplay, we can actually be very brief. If you’re a fan of how your weapons feel in Rainbow Six Siege, you’ll feel right at home here. If, on the other hand, you have the feeling that everything is going a bit rough there, it will be no different here. Since the gunplay is more realistic than in say a Far Cry or a Call of Duty, you notice that everything is slower in terms of pace. However, you get used to this and in no time you hit the enemy on all their weak spots.

Fortunately we hardly encountered any bugs. Here and there an enemy will crawl through a wall, but this is usually an exception. One technical problem, however, consistently cropped up: while ‘reviving’ a fallen soldier, the animation doesn’t always register your action correctly, so you often can’t pull your comrade up on your first attempt.

This can be frustrating, especially in hectic circumstances where every second gained can mean the difference between life and death. This has cost us several missions – and therefore also a few Operators. As for the connection, we have nothing to complain about. It never dropped, nor was a mission ever interrupted because a connection was not stable enough.

Ubisoft certainly doesn’t have a bad title on their hands here. Especially if you have two friends who can accompany you, the game is definitely recommended if you like shooters. The fact that the game is challenging, even on the lower difficulties, means that you have to pull out all the stops alone or with your friends to succeed in your set-up. Visually it is solid and the audio ensures that the atmosphere is conveyed well.

There are plenty of gadgets and Operator specific weapons that provide the necessary variety and it is nice that Ubisoft encourages the use of multiple Operators. However, the fact that most missions start to look a bit alike after a while, a small annoying problem with the teammates’ reviving and a not too surprising story, can’t spoil the fun.