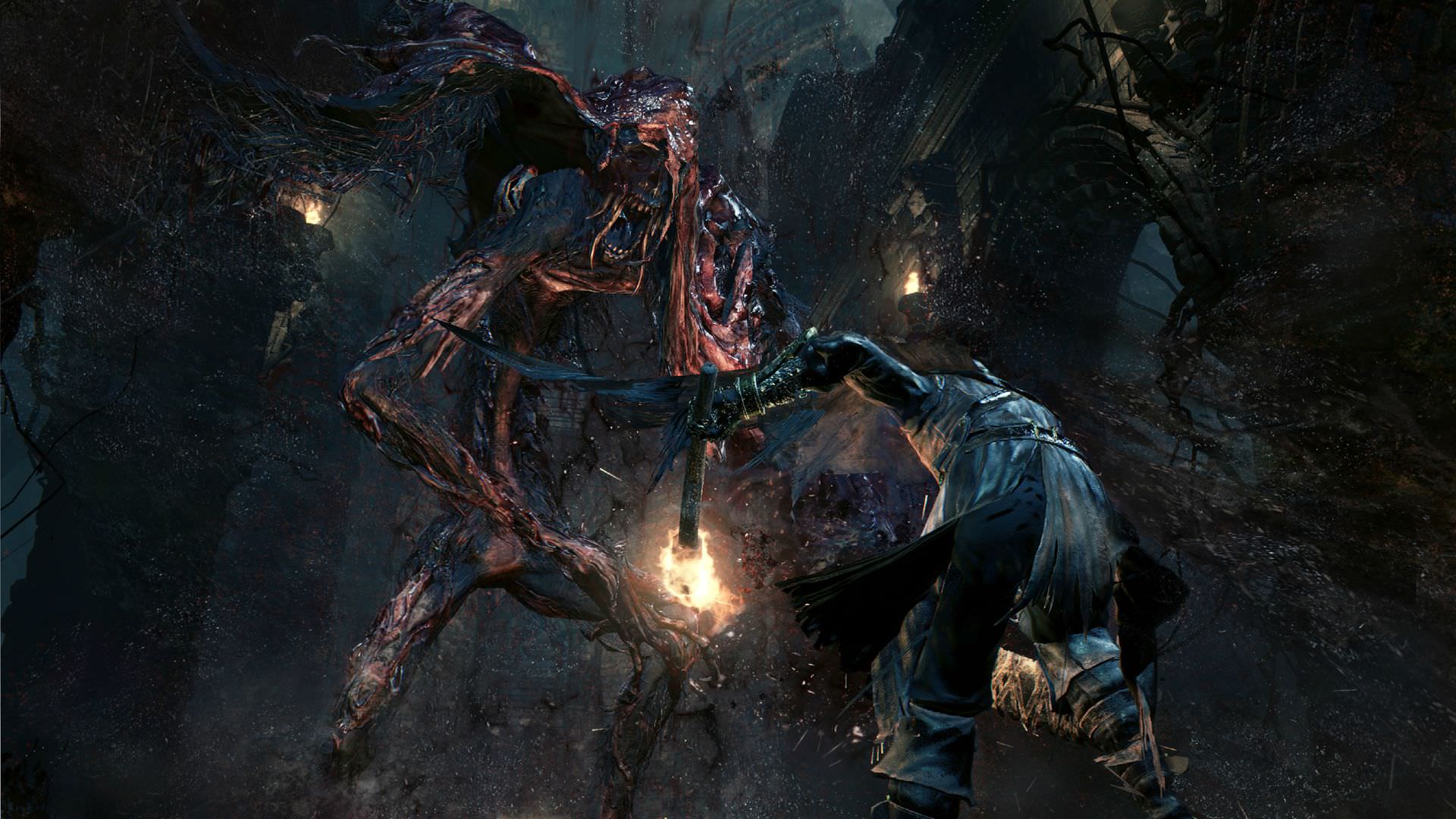 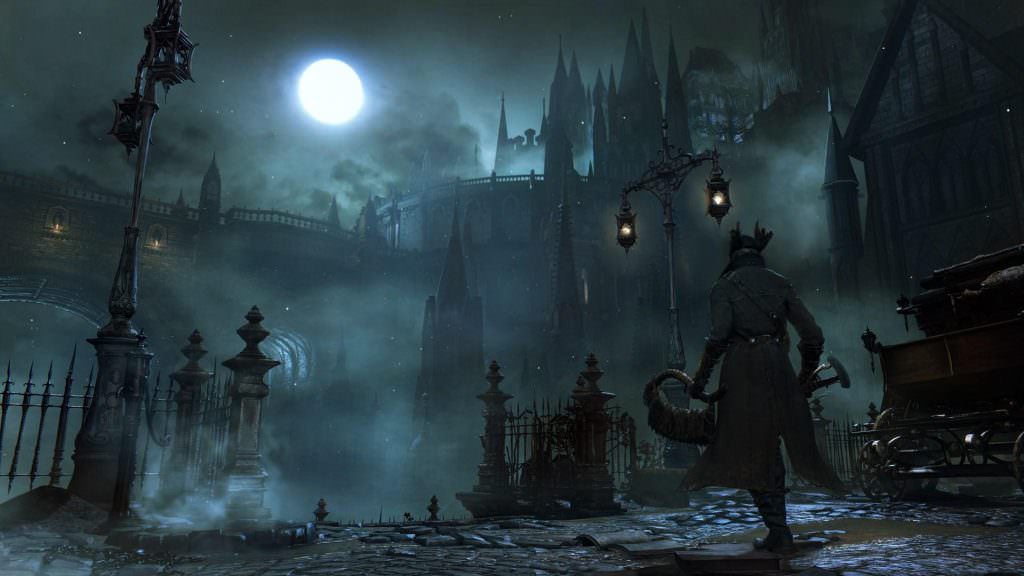 The other weekend, I finished my first playthrough of Bloodborne and thoroughly enjoyed every drop of it. In short, it’s a vicious, visceral behemoth that scratches my gothic Lovecraft itch the same way Demon’s Souls and the first Dark Souls scratched my Berserk itch. You can read more here, but suffice to say; Bloodborne is fucking brilliant and you should play the hell out of it.

To be honest, I was a bit wary going into Bloodborne due to Dark Souls 2. DS2 was far from awful and though it’d be a stretch for me to say it was even remotely bad, it was obviously missing the spark of the previous two games. I think most fans of the Souls series would agree. Even though “more Dark Souls” is a great thing in theory, it left me disappointed and sour to the point that I didn’t bother with a repeat playthrough. On the flip side, I can’t get enough of Bloodborne.

So, in an attempt to pinpoint why: here’s how Bloodborne got it right.

The AAA games industry runs on hype. Pre-order bonuses, swanky trailers, competitions and media, merchandise and social media content out the wazoo are common practice these days. Bloodborne wasn’t free from it, but there was significantly less to wade through. Perhaps it’s because DS2 was a bit of a letdown, or perhaps it’s because the audience was naturally smaller due to Bloodborne being a PS4 exclusive. Regardless, the launch was much quieter and thus had less expectation.

Dark Souls 2 on the other hand had big boots to fill after the runaway success it’s prequel was. Nobody expected Dark Souls 1 to be that good but everyone expected 2 to be just as good if not better, including it’s promoters. Hence why you could order a copy with an exclusive man bag and a goofy hood you’d never wear in public. Gracefully, Bloodborne’s special edition faff wasn’t quiet that shameless. The online hype was quieter too. It may have been the fanbase but I’ll go out on a limb and say it was the promoters keeping more of their peace.

Bullshots (the promotional material games media gets that shows suped-up or even Photoshopped images of the game to make it look nicer than it really is) are a blight. They exist in a limbo between false advertising and non-representative artwork, and most players feel cheated once the final product they paid for doesn’t match what was advertised. At best, it’s a dishonest practice. At worst, it’s an outright lie.

Dark Souls 2 was in the latter category.

On-floor demos at Tokyo Game Show in 2013 showed a game that simply wasn’t Dark Souls 2. Minute details aside, the lighting wasn’t as remotely advanced/there were less active shaders, the level of archetectural detail was much lower, and some of the textures were so horrendous that it looked like your little brother’s Minecraft map. Obviously there will be artistic changes up until the end, but this demo was so much more technically advanced that there’s no way the team thought the final game could have looked like that. Even then, there’s the baffling decision to brighten the entire game up, to the point that it’s new torch gimmick was rendered useless.

Meanwhile, Bloodborne showed a demo that was bugged out with framedrops so bad it earned itself some serious jeering. But aside from that, there was no real misrepresentative visuals out there. If anything, the final game looked better and I personally experienced less frame drops than in Dark Souls. That being said, I rarely used the online features which may be a big culprit.

All that aside, why From Software felt the need to show off their swanky graphics is a mystery to being with. The Souls games are aesthetically pleasing as is and fancy new shaders and bump mapping weren’t at the top of any Dark Souls fan’s list of improvements. Why they even bothered in the first place is beyond me but it hurt them in the end.

Aside from this quelling a bit of expectation, it frees up the development team to take the game in a new direction. While I thought that more of the same of an already great game was fine by me, Dark Souls 1 was already so good that making an entire game that simply tweaked what was there was overkill. The basic formula in DS2 is the same in broadstrokes, and you wouldn’t notice the difference unless you were a hardcore fan already. Bloodborne took the bold step of discarding shields, speeding up player movement, adding a new counter-attack system, reinventing the backstab mechanic, kinda replacing magic with special items and guns, and changing how “armour” functions.

It also leads to plot and lore-baggage which, in a game that’s purposely vague and open-ended to encourage fan speculation, results in some convoluted storytelling. It undermines your own headcanons and theories which is something Dark Souls 1 didn’t do with Demon’s Souls. Bloodborne taking place in it’s own fresh universe means it can go new places without a care. It also meant there was no blatant pandering or fanservice.

As an extension of the above point; that fresh start means there was space to build a complex and detailed history for the player to uncover. Bloodborne’s world is by far the most intricate of them all, were every faction or name mentioned is tied to the heart of the eldritch forces at play. Trying to incorporate DS1’s wide, vague and convoluted plot into a sequel can only be a hamfisted labour.

Even still, the bosses and enemies in DS2 have little discernible logic behind them. Why are there viking-pirates and gangly cave-dwellers in No Man’s Warf? And what’s the idea behind the boss in that ship? Bloodborne’s nasties evolve in front of you; you can see the progression of the plague as some enemies are more beast-like than others, and what otherworldly origin of blood may have warped them that way. Even the world map feels like a living geography rather than a collection of themed locations that look like “Poison Level”, “Fire Level” and “Pirate Level”. While it leads to some sameyness, in the long run it feels much more alive and melds together naturally. Yarnham has a deep history, Drangleic doesn’t really.

Aside from how Yarnham feels like it geographically makes sense and wouldn’t dare have you go up a magical sky lift into the middle of a volcano, the actual area you run around in loops around and opens up shortcuts in a holistic way. There’s no need for as many Lanterns/Bonfires because doors, ladders and bridges are strategically placed to cut down on running about. Not only is this convenient for getting back to where you died quicker, it gives each location more presence, and gives you more reason to hang around it. It’s like comparing the first Devil May Cry’s map to DmC’s levels.

Less linearity in a Souls game is good as it provides a stronger sense of exploration, giving you more chances to notice details in the level design that could have you asking questions about what you’re doing and where you are. It offers more routes to get to where you want to go, if you want to avoid certain enemies or just simply explore and see what you’ll find. It’s a kind of satisfaction that’s understated in action games, but it’s simply fun to see new places or notice details you didn’t before.

While the Souls series is (in)famous for it’s punishing difficulty and hellish boss battles, player-driven exploration and the richness of it’s worlds are just as important.

I know some people are going to disregard my opinions for this one, but the way Bloodborne cuts back on the amount of items you pick up, and how upgrading weapons is now a much more straightforward process was a relief to me. Never again do I want to have to hunt down fucking Bladestone chunks or consult a chart on how to upgrade my sword to a Chaos sword, if I could even do so. Likewise, I don’t want to end up spending all my precious metal shards upgrading armour, only for it to become useless as I level up.

This means that armour doesn’t become increasingly useless as you level up. Even then, the stat gulf between armour sets is shorter, so if you want to simply wear something because it look cool you won’t be penalised as hard for it.

Nothing that was discarded from DS2 was missed by me to be honest. The whole game is less grindy than before, yet I put just as many hours in and will continue to do so in the future.

I get into this more in the blog post I linked up top, but while people say Bloodborne is a “Lovecraftian Souls game”, I argue that the first two games were already Lovecraftian on a thematic level. Sure, there are less tentacled beasties to fight, but the underlying feeling of insignificance and existential dread made up their core. Dark Souls 2 didn’t really have that in there. When I finished it, I didn’t feel the sort of depressing existential indulgence Demon’s Souls and Dark Souls 1 provided.

Bloodborne has it in spades, only now it’s louder, nastier and more horrifying than before.

Don’t get me wrong, I still think you should play Dark Souls 2 in face of all it’s flaws, but if you have to choose between the two, choose Bloodborne.