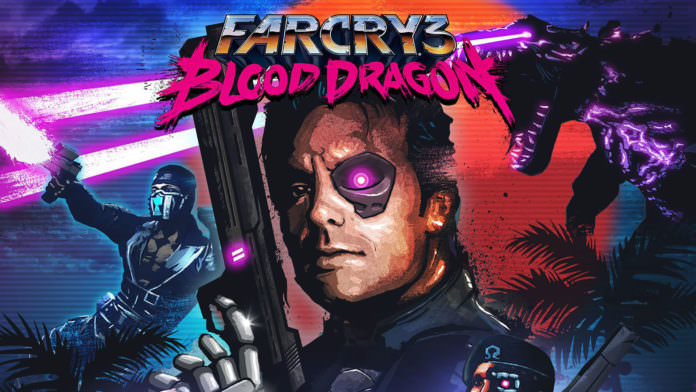 You know what? FarCry 3: Blood Dragon is just the bee’s knees. This game is what you’d get if Hotline Miami and Tron had a baby and that baby was orphaned and raised by FarCry 3, who for some reason played the Drive soundtrack to it every night while it slept.  Now I know what you’re thinking. You’re thinking: “Hey! This game came out in 2013! Why are you reviewing it now?” Okay, I hear you, I get it, just hear me out, okay? Far Cry 3: Blood Dragon is one of the free games available to PlayStation Plus subscribers this month. See, there is a legitimate reason. Don’t you feel bad for interrupting now?

It’s nothing new. FarCry 3: Blood Dragon didn’t break any new ground, although with a name like that who expected it to, right? Blood Dragon could easily have been DLC for FarCry 3 so if you enjoyed the gameplay of FarCry 3 or FarCry 4, you’ll like Blood Dragon. The biggest difference is probably the accelerated skill tree. Blood Dragon is a much more concise experience than any of the main-line FarCry games so there’s less time to let you mess around with all of your new skills

also means the world is significantly smaller than those of the numbered sequels. This isn’t a bad thing, though. Whether you’re a veteran of the FarCry series or totally new, this condensed experience really emphasizes its good points. In fact, if you’ve never played a FarCry game and you’re a PlayStation Plus subscriber, go play this game right now. You’ll thank me later.

Now that all the FarCry virgins are gone, let me address you hardened veterans and dubious fence-sitters. The best parts of these games come about because of the emergent gameplay created by the interaction of simple gameplay mechanics. Dropping from the rafters onto an armoured thug, throwing his combat knife at the nearest guard and then taking out his buddies by pulling the pin on his grenade and kicking him into the middle of the room?

That’s an incredible feeling that most games don’t come close to emulating. In Blood Dragon you don’t have to play through 20 hours of plot and side quests to be able to do that, it’s more like four. It really speaks to the benefits of games as a condensed experience. If you have any affinity for crazy open-world antics, FarCry 3: Blood Dragon is a great game you can power through in a weekend and feel good about.

You could say I’m super biased here because this 80s neon “Everything glows because f**k you” aesthetic is one of my favourite aesthetics ever. Then again is it bias if the art direction is just really good? If you liked those sections in Saint’s Row: The Third where you went inside the computer, you’ll probably like this. If you liked anything Tron related, you’ll probably like this

Blood Dragon takes the graphical prowess of Ubisoft’s Dunia engine and applies this radical art-style to it. It’s one of the best implementations of an abstract art-style I’ve ever seen and thankfully the Dunia engine is relatively solid so you’re probably not going to encounter a whole lot of graphical bugs either. This isn’t related to Blood Dragon at all but if like the aesthetic as much as I do, you should probably check out Power Drive 2000 and NewRetroArcade.

Blood Dragon takes a departure from the relatively serious ‘good vs. bad’ stories of the main FarCry series in favour of a more tongue-in-cheek story. It’s obvious right from the start that this game is a parody of classic 80s action flicks like Cyborg or Point Break. I mean the protagonist’s name is Rex “Power” Colt for goodness’ sake. He’s also a Mark IV Cyber-Commando I’ll have you know

I mention that the game is set in the far-flung future of 2007? The cheesiness of this homage late 80s/early 90s culture is spot on, speaking as someone with absolutely no point of reference for what that time period was actually like.  The story is told through era-appropriate cutscenes like in Ninja Gaiden on the NES. For the most part, the story is actually pretty funny thankfully. It helps that it doesn’t take itself too seriously but there are some genuinely laugh-out-loud moments in there. Just be warned that sometimes it gets a little weird. At one point there’s a training montage (because of course there is) which is immediately followed by a sex scene. All in this weird late 80s video game cut scene motif. It’s weird.

It’s pretty rare that a soundtrack ties a game together as well as Blood Dragon’s. It’s too common for music to be jammed in just so the player doesn’t get bored wandering aimlessly around an open world. The music of Blood Dragon feels specifically tailored to make your experience with the game that much more genuine and enjoyable. Whether it’s a power ballad playing under the aforementioned training montage or a rip off of the Six Million Dollar Man theme playing under the intro, the music really makes the game whole.