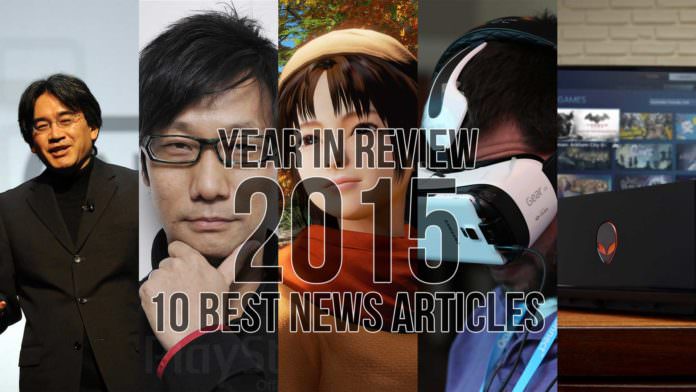 2015 was certainly an eventful year for gaming, from the controversies of Konami and record breaking Kickstarters to the death of a legend. So why not sit back, relax and reminisce of the year gone by with Elite Gamers 10 Best News Articles!

The arrival of the Steam Machines in November brought with them open platform consoles with around 1,500 games already available to play. The Machines are built around Valve’s Linux-based SteamOS.

The console was groundbreaking, allowing gamers to play PC games without the expense of a gaming computer. They come with their own original Steam controller, which also launched this year and offers innovative touch pad thumb-sticks.

However, it is doubtful that the machines will put any sort of dent in the console market. Alienware have priced their machine at €599, considerably higher than PlayStation 4’s €350 price tag. The Steam Machines are generally seen as a console with niche appeal. Time will tell how successful they will be.

You can check out the full article here.

When Apple CEO Tim Cook revealed the new Apple TV at a press conference back in September, very little time was given to discussing gaming. This device, he said, will change the way we think about television.

However, when the device hit the market games quickly became a significant element of its appeal. Apple TV was not designed with gaming in mind, yet it turned out to be a great platform to play them on. Apple TV has been with us since 2007 with three significant updates along the way. The 2015 version is the first to seriously address games.

When it launched, half the top-selling apps for the new Apple TV were games. These games were mostly family-orientated like Beat Sports, 3D space shooter Galaxy on Fire: Manticore Rising and platformer Rayman Adventures. Mobile games like Crossy Road and Alto’s Adventure look great on the device.

8. The announcement of Fallout 4

Bethesda’s acclaimed open-world RPG series returned with Fallout 4 for PC, Xbox One, and PlayStation 4 this November. A huge moment for the game was the excitement its announcement created.

Fallout4.com went live on June 2 and consisted of this countdown timer:

Word spread fast. Really fast. The gaming community all sat intently waiting for the countdown to reach zero. When the timer ran out, the official trailer for Fallout 4 played, which I’m sure we’ve all seen. However, no release date was given, not until E3.

Those who stayed up late into the night to watch the Bethesda showcase were certainly not disappointed. In the Dolby Theatre, LA, the release date was announced as 11-10-2015. Viewers were given an insight into some game footage.

Bethesda Studios game director Todd Howard said that building this version of Fallout began “with an obsession for detail.”

In a bid to follow suit in the removal of the Confederate flag from the marketplace, Apple removed many games containing the flag from the app store, such as Ultimate General: Gettysburg and all the Hunted Cow civil war games. They were not the first to do so. The likes of Amazon, Etsy and Walmart also made the move to remove any products depicting the flag.

The decision followed the shooting in Charlestown which resulted in the death of nine black members of the Emanuel African Methodist Episcopal Church on June 17. Following the event, photos of suspect Dylann Roof emerged of him with a Confederate flag.

GamesLab, the developer of “Ultimate General: Gettysburg”  confirmed on Twitter that their app had been pulled from the App Store because of the Confederate flag. GamesLab were none too happy about being told that their game could be put back on the App Store when the Confederate flags were removed. The developer said that they would not make such changes as it would affect the historical accuracy of the game. To them, telling the story as it happened is very important.

Apple CEO Tim Cook tweeted “My thoughts are with the victim’s families.Let us honor their lives by eradicating racism & removing the symbols & words that feed it,”

However, Ultimate General: Gettysburg was returned to the App Store, unchanged. “Ultimate General is back! Unchanged,” developer Games-Lab said on its official website. “After several late night phone calls with Apple yesterday and today the game has returned to AppStore the way it was… in 1863.”

An Apple spokeswoman said soon after that they would begin to reinstate some of the games that were wrongly removed in due course.

2015 saw a huge push in the area of VR. Sony really began pushing PlayStation VR and getting games made for the device. What was once unaffordable for the ordinary gamer will now be available at a much more manageable price.

VR headsets due on the market in 2016 include Oculus Rift, HTC’s Vive and Sony’s PlayStation VR. Samsung released its Gear VR in November 2015 through mainstream retailers. The less than €100 headset attaches to various Samsung phones.

In March 2015 Magic Leap released a video of an augmented reality shooter that the company claimed its staff was “playing around the office right now.” The game is superimposed on the player’s environment, dropping combat into wherever you happen to be playing.

Microsoft’s HoloLens won Time’s “top gadget of 2015” even though it’s not actually available. Microsoft and Mojang used E3 to show a version of Minecraft which wowed the audience and viewers alike. HoloLens allows its wearer to see and interact with holograms as if they were real. However, this technology is far from completed.

5. Batman: Arkham Knight’ for PCs pulled because of glitches

Nobody could forget the total disaster that Batman: Arkham Knight was for PC. The third and final of Rocksteady’s Arkham games was such a catastrophe that Warner Bros. pulled the game. Systems that were well above the recommended spec still experienced bugs, frame-rate issues, crashes and problems with the resolution.

With all of the bad press surrounding the game, Warner Bros. Interactive chose to remove the digital version of the game from Steam and other digital download services

It was re-released months later still laden with problems. Finally the company offered unconditional refunds to anyone who wanted to return their purchase prior to the end of 2015.

The consoles were first banned in 2000 amid fears that consoles could affect development in children. Since last year the country’s regulators only allowed foreign consoles in the Shanghai Free Trade Zone, an area of 11 square miles. Gamers in China thus turned to PC and mobile gaming.

The lifting of this ban is great news for gamers in China who will now be able to play the latest games The news of course is music to console-makers ears. “This is great news for us,” a Sony Computer Entertainment spokeswoman said.

China’s gaming market, which includes sales of mobile video games and consoles, is estimated to be worth $22.2 billion this year, up 23% from a year earlier.

Check out the full article here.

Satoru Iwata, President of Nintendo Co., Ltd., poses during an interview after Nintendo’s E3 presentation of their new Nintendo 3DS at the E3 Media & Business Summit in Los Angeles June 15, 2010. Japan’s Nintendo Co Ltd on Tuesday took the wraps off a new version of its DS handheld device that can play games and show movies in 3D without glasses, in an effort to revitalize demand. REUTERS/Phil McCarten (UNITED STATES – Tags: SCI TECH BUSINESS)

In 2015 the gaming community grieved the death of Nintendo president Satoru Iwata at the age of 55. Iwata passed away on July 11 due to a bile duct growth. The president was forced to skip last year’s E3 due to his poor health, and shortly afterwards underwent surgery to remove the bile duct growth. A few months later, in the wake of concerns over his health, he said via Twitter “I’m progressing well”.

A talented programmer, Iwata first joined Nintendo’s HAL Laboratory in the 1980’s, where he worked on games like Balloon Fight and EarthBound. He became a Director of the company in 2000, and in 2002 was appointed as only the fourth President of Nintendo when he succeeded Hiroshi Yamauchi.

In his time as President, Iwata oversaw some of the strongest (Wii, DS) and weakest (GameCube, Wii U) periods in Nintendo’s history as a video game company. In recent times, he developed almost cult status as the host of the Nintendo Direct programs.

Satoru Iwata had been at the heart of Nintendo for 15 years, frequently being described by those that knew him as a CEO with the heart of a gamer. An irrepressibly good nature coupled with a tireless work ethic had also made Mr Iwata extremely popular with fans. Prior to his work with Nintendo, Mr Iwata worked as a programmer at HAL Laboratory and was instrumental in the development of games such as the Kirby, Earthbound and Balloon Fight series’.

2. Fans show their support on Kickstarter for Shenmue 3

At Sony’s E3 conference Yu Suzuki (the creator of the Shenmue franchise) announced that Shenmue 3 was officially up for funding on Kickstarter. Thousands of fans flooded the Kickstarter website to show their support, crashing the website.

Shenmue 3 is scheduled for release in December 2017.

There’s enough material on the whole Kojima vs Konami saga to write a book but what’s glaringly obvious is that Konami handled the whole ordeal pretty badly.

Back in March, rumours began to that Kojima’s relations with the Japanese publisher were beginning to sour. Konami had removed Kojima’s name from promotional material for the hugely successful Metal Gear Solid V: The Phantom Pain. Kojima was director of the game so removing his name from everything, even the game’s box-art was a huge insult.

The cancellation of the Silent Hills game served to further outrage Kojima’s followers. The Guillermo del Toro/Kojima game’s demo, PT, was also pulled. Konami made no effort to apologise or explain to gamers.

Konami then announced that they’d be moving more and more toward mobile gaming and away from consoles and PC. This left the future of the likes of Castlevania in question.

Soon after the release of MGS5, Kojima released a farewell video celebrating the end of the Metal Gear series. A few weeks later, pictures emerged of him attending a farewell party at the company. Konami claimed that Kojima had merely left to go on vacation.