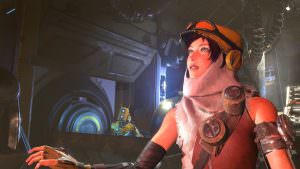 ReCore was one of the most interesting and beautiful titles that I saw at Gamescom. The Xbox One exclusive is a collaboration of two completely different developers, in origin and culture. Armature Studio from Texas and Comcept Inc., Japan, joined forces for a Story Driven Action Adventure game with clear influences from Japanese anime. The game, from Mega Man creator Keiji Inafune, follows Joule Adams as she leads a group of Corebot companions on an adventure to save mankind in a dangerous world known as Far Eden.

In the demo, we got to see the combat mechanics of our main character, Joule and her Robo-Dog, Mack. The combat system is closer to role play than action. The enemies are pretty tough and each one has a different coloured energy core. When attacking an enemy, the player must switch to the corresponding colour on their gun to cause more damage. This got harder in the demo once I was surrounded by 5 of these machines, all with different colours. 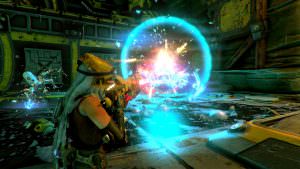 Your Corebots companions are valuable allies in the fight, they have powerful special attacks but there is a cool-down period so you have to time your attacks carefully and make sure you don’t run into trouble right after. If a Corebot receives too much damage, you can swap it out with a new one by pressing the shoulder button. You can carry up to two Corebots into a fight. Corebots can be upgraded by unlocking different parts as you progress, allowing players to choose what fits their play-style the best. 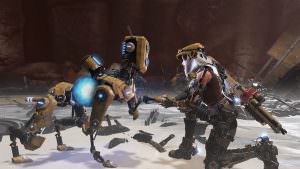 ReCore is full of platforming elements that tug at the heartstrings of nostalgic gamers like myself. The missions are linear but the objectives themselves can be approached from different paths meaning there are many different ways of playing the game. Speaking to one of the developers, they said that the game should take about 8 to 10 hours to complete. There are also additional dungeons that will bump that time up to 15 hours, and of course completionists will get a lot more game-time.

Personally, ReCore was one of the best titles I saw and played at Gamescom. I love these kind of games and the design is quite impressive. It’s obvious that there was a lot of focus put on the graphics and sound and I can’t wait to delve into the full game when it’s released.

What did you think of the titles at Gamescom this year? Let us know in the comments!