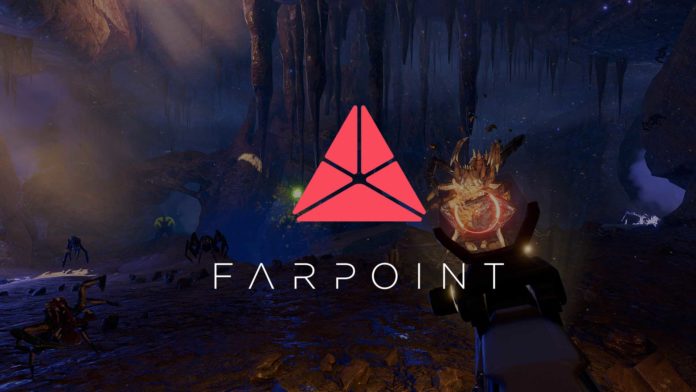 Farpoint would be a thin, forgettable and easy first-person shooter set in space without VR

Sales of PSVR have ‘exceeded expectations’ supposedly and all without utilising the virtual reality headset to anywhere near its full potential. Games, so far, lose finesse, mobility or depth all to cater for the motion sickness or clumsy ‘Move’ controllers. But not in Farpoint.

Farpoint would be a thin, forgettable and possibly easy first-person shooter set in space without VR. But dumped face-first into an immersive and detailed world, the game is elevated to a must-have for PSVR owners.

The control scheme of Farpoint is a masterclass. The default is lead by the head with a right-stick rotation option for the VR-hardy. I suggest the latter for a silky smooth FPS experience. The designers made some subtle concessions that improve the flow – enemies try to line up in front of you rather than flank and a two-gun line-up simplifies the controls.

The visual experience in Farpoint is similarly top-notch. The intro crash sequence and first ramblings on the strange planet are hair-raising spectacles to show off the immersive power of VR. What follows is a visceral and often frightening roller-coaster interrupted by fixed cut-scenes that do a good job filling in the blanks left between beautifully rendered holograms found along the way.

Before you scream ‘git gud’, Farpoint is definitely a tough game

What could have used some more work is the checkpoint system. Too often, I was sent back ten or twenty minutes of hard space-battlin’ after one of dozens of deaths. Before you scream ‘git gud’, Farpoint is definitely a tough game. It piles long, medium and short range enemies in all at once. Often, it spams area weapons. It has one-hit kills littered throughout its 5-7 hour run time.

But Farpoint is rewarding like no other game yet for PSVR. That sense of satisfaction when another of the game’s caverns goes silent following a poly-alien bullet fest is intoxicating. And only a little nauseating…

A little one-dimensional… even in three dimensions

Each level is just a new weapon, some corridors and a few battles

So much effort was put into balancing playability, comfort and intensity that Farpoint is a little short, one-dimensional and lacks any imagination in the weapons department. The game is a linear romp through a haunting, immersive planet but it gets a little stale. Each level is just a new weapon, some corridors and a few battles with a boss fight if you are lucky. Farpoint lifts its weapons from Halo and any space-FPS you can think of – secondary fire modes give them a little life.

You will be struggling to care for the plot’s finer point (singular) as there isn’t anything to learn beyond the fate of the two human-shaped MacGuffins. Later on, we pair up with a living AI ally you will want to shoot so badly that the developers had to programme her to shoot back [citation needed].

Double the guns, what feels like quadruple the foes and timely team-mate revives make this mode an adrenaline soaked must

Another little addition that breathes some freshness into proceedings is a cooperative mode. Unfortunately, there aren’t many people playing Farpoint in co-op and matchmaking partners are few outside mid-evenings. When you do get a game, it’s a lot of fun. Double the guns, what feels like quadruple the foes and timely team-mate revives make this mode an adrenaline soaked must.

Challenge mode puts you back into any level you have finished with a seemingly endless stream of nasties being put in your way. This adds a little longevity to a game that lacks replay value elsewhere, providing you like medals. However, it’s not going to be the hot competition the developers are hoping for; if the leaderboard in the menu is anything to go by.

Farpoint is one of the rare PSVR titles that is a good game because of the VR rather than in spite of it. Smart choices are littered throughout the title; from the enemies to the cover-laden map. A player may well forget that VR gaming is still in its infancy. Farpoint will certainly dull with time as the genre fully matures but it’s an important title.