Far Cry is one of this hack journalist’s favourite series so Far Cry 5 was always going to be memorable. Nestled between two of the loudest events on the showroom floor lay the suitably bombastic FC5 stand. Hype can be a wonderful thing. The controversial subject matter coupled with excellent lore-building made the engimatic Seed the whisper on everyone’s lips in the Ubi area at GamesCom.

Gunplay is given a huge lift by…what feels like the Ghost Recon: Wildlands bullet physics engine

A short jump of a huge queue and off we went to Montana.

Taking a Walk on the Wildlands

The 20 minute demo was quite the set-piece. The initial battle for a small town demonstrated the series’ famous stealth vs. bang-bang gameplay. There was a healthy variety of weapons to find and opportunities to start taking the town down quietly or begin an all-out assault with side-kick in tow. The levels are similarly laid out to give players a choice of strategy – there was even a sniper rifle atop the town’s water tower. Subtle. 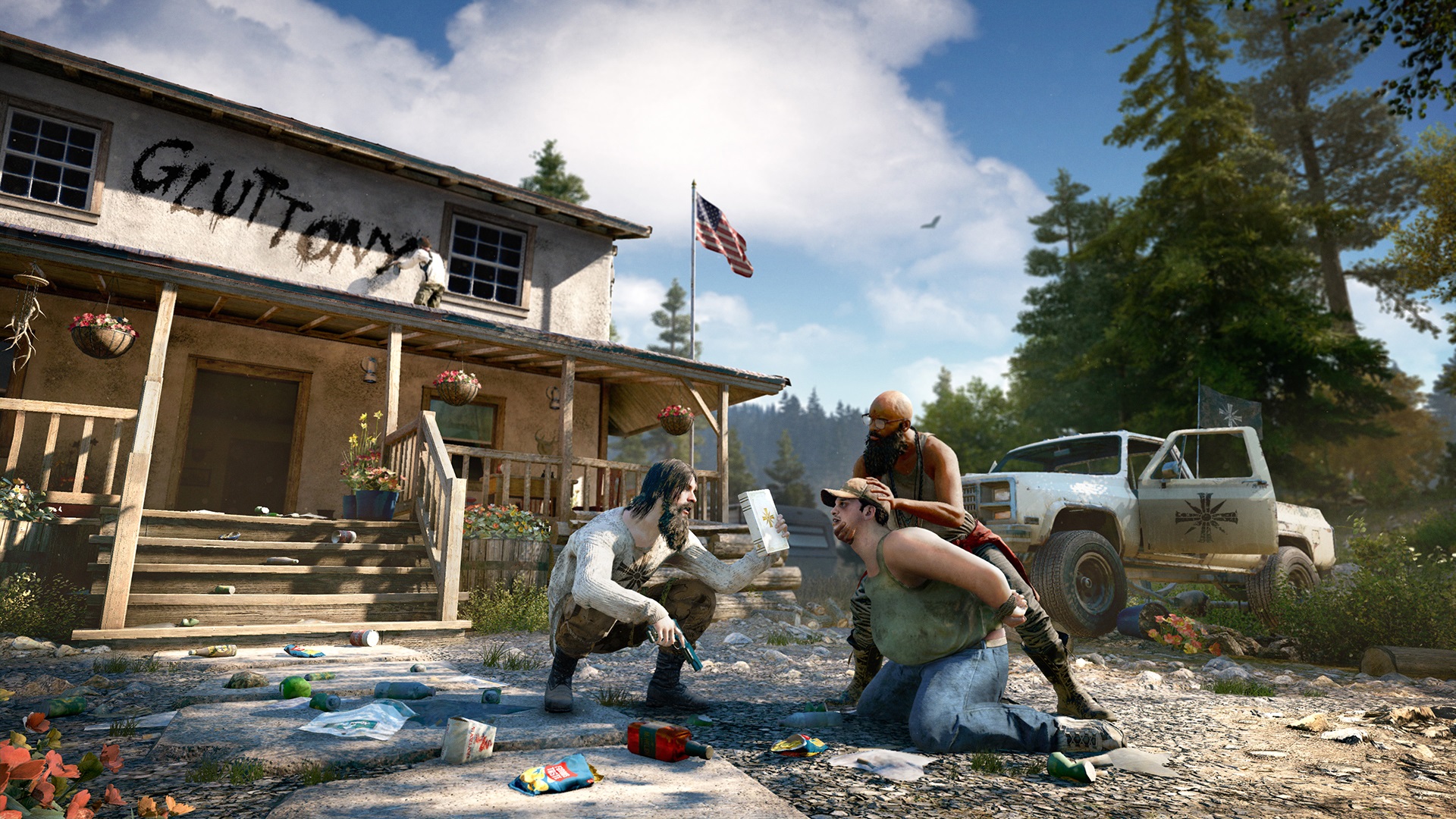 Gunplay is given a huge lift by the apparent abandonment of hitscan weapons and using what feels like the Ghost Recon: Wildlands bullet physics engine. Bullets drop and land with a satisfying hit marker that split second after you fire. In a game like FC5, this deliberate gun combat style is welcome, it felt great. There were other similarities to Ghost Recon’s Bolivian adventure like controlling companions, driving and flying.

We were given a choice of companion for our demo, I imagine the side-kick system will work like Bethesda ARPGs, i.e. unlock and choose at will. I chose the lady because she looked handy with a gun. Aside from the obvious misdirection and flanking use, she was mostly useless. 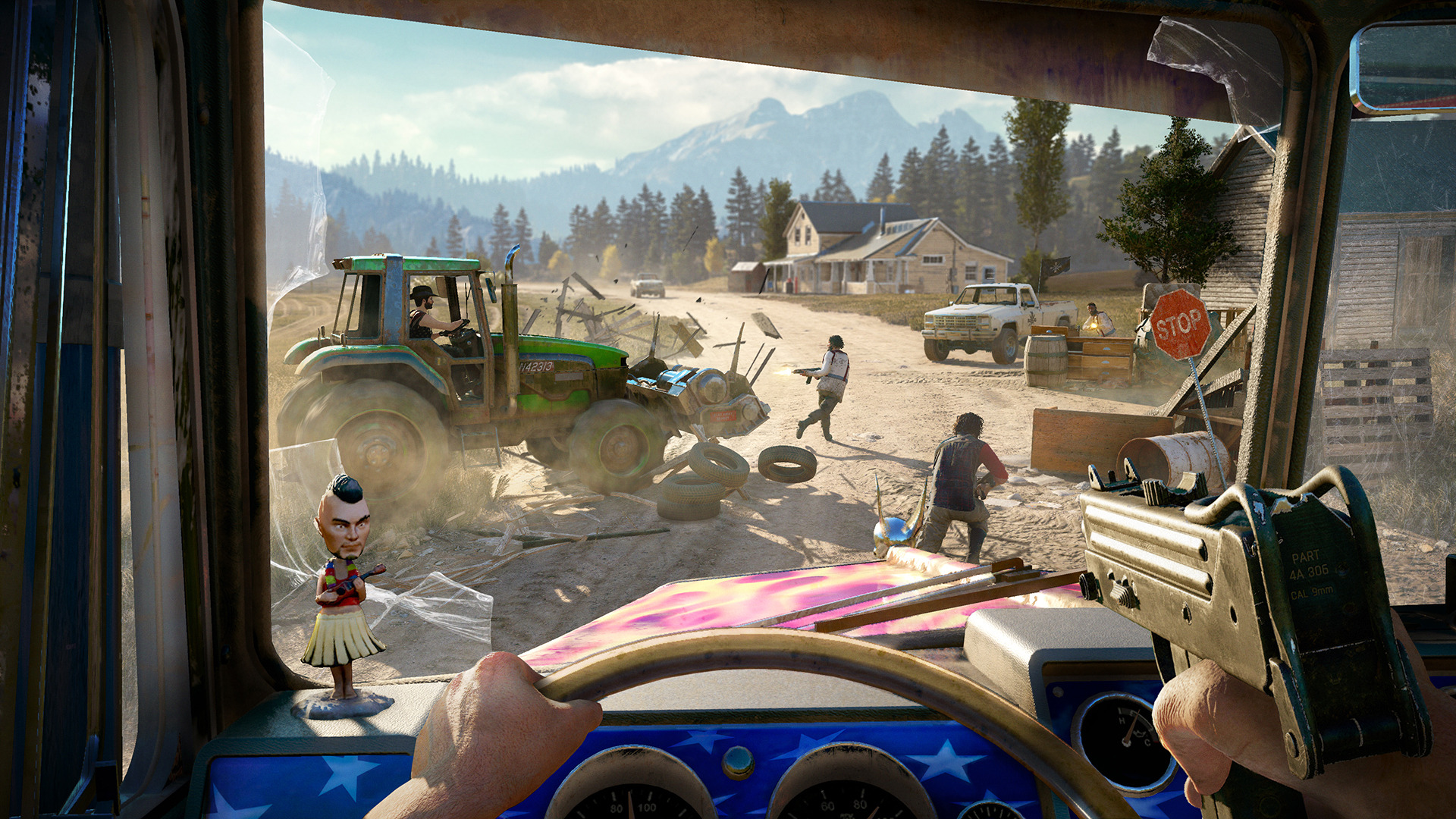 After taking the town and speaking with a well-voiced bar-owner, I chased the macguffin marker to an airfield. It was here where I got the only taste of Far Cry 5’s hunting and crafting system. I found a fishing rod and without directions I proceeded to fail at fishing for 3 minutes or so. It’s possible that it may be the new Ocarina of Time, a game that trapped my friend’s mother in the fishing mini-game for days, who knows?

Hope County is the Montana of telly-land with its country music soundtrack and beflagged vistas. The map seems more open than the insulating peaks and valleys of FC4

The final part of the mission was superb. We used a crop-duster decked like a ground-assault aircraft to interrupt Eden’s Gate’s industries and their hold on Hope County. Controlling the plane was challenging enough to make the bombing runs and subsequent dogfight interesting. There was no difficulty setting offered so ‘medium’ can be assumed, Far Cry 5 is not a tough game but needs due caution to prevent being surrounded or picking too big a fight.

A Land of Hope

Hope County is the Montana of telly-land with its country music soundtrack and beflagged vistas. The map seems more open than the insulating peaks and valleys of FC4 and dense jungles of FC3. In a lot of ways, the map feels more like Far Cry 2 with some terrain separating regions but spaces to roam freely for most of the game-world. Vehicles will be vital for traversing the wide open spaces and our play-through seemed to have one close-at-hand permanently. 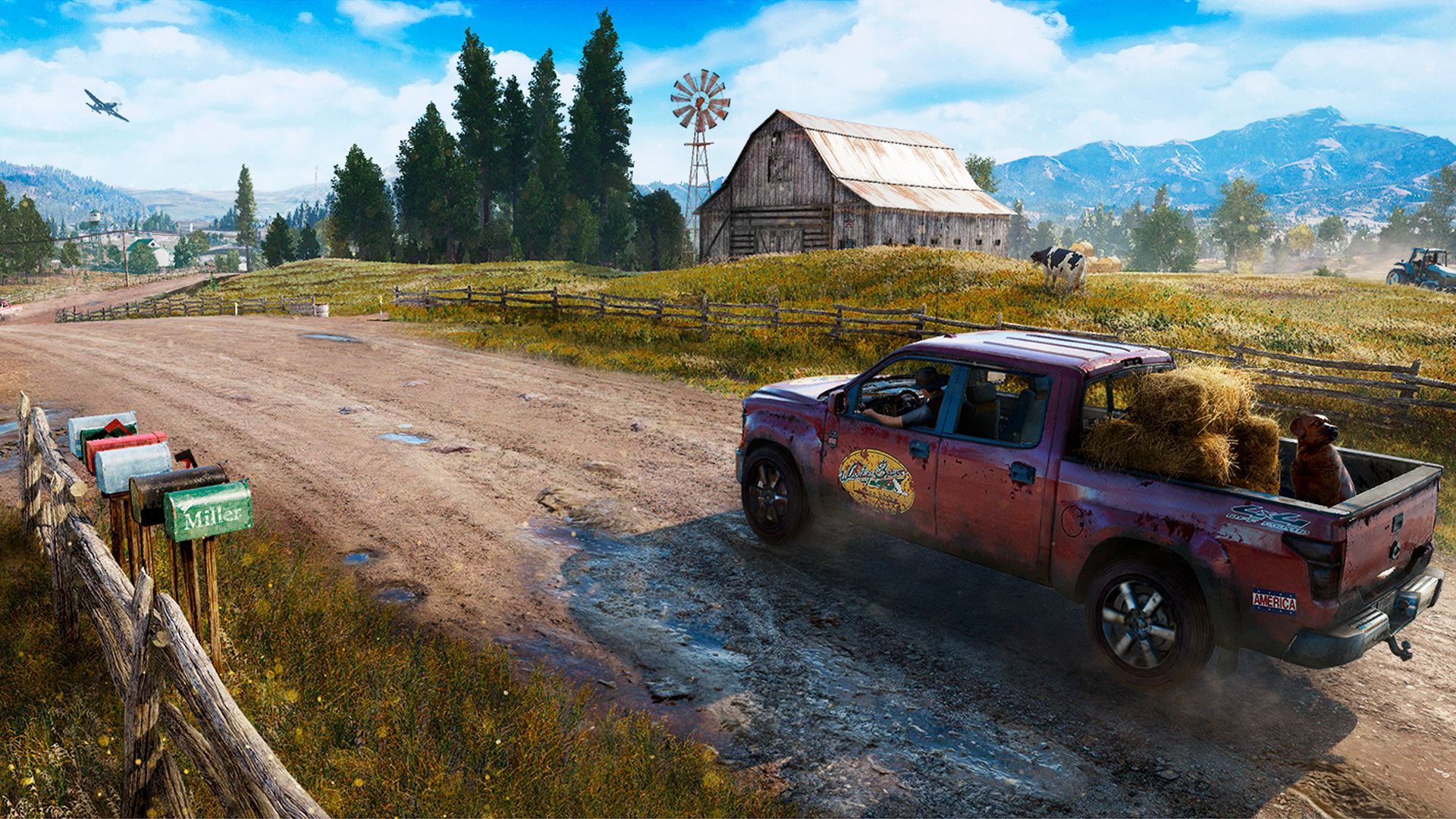 Father Seed, Eden’s Gate and the resistance movement were nowhere to be seen during our playthrough but the mechanics and atmosphere were well on show. Far Cry 5 did not disappoint in these respects. The charismatic madman at the centre of a Far Cry game has weaved himself into another corner of the globe, I cannot wait to meet him.