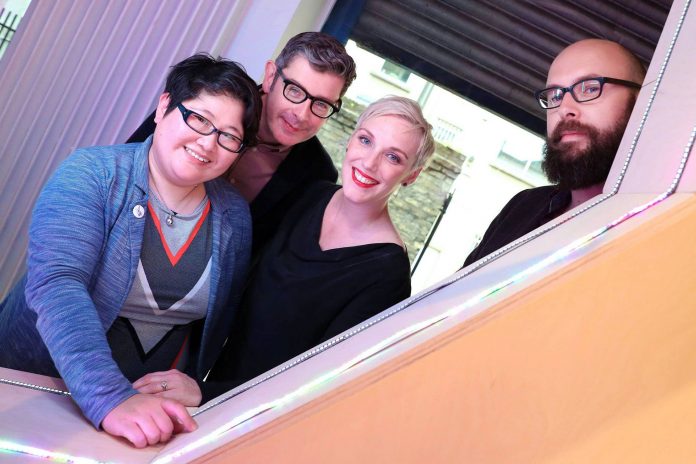 404 is a tech event that aims to connect like-minded people, show off innovative technologies and ideas and provide many interesting speakers, installations, demos and live performances.

Cello Fortress is a unique combination of a game and a live music performance. A cellist defends a fortress by improvising on his cello. Melodies control the guns, dissonant notes activate the flamethrowers. Players from the audience use game controllers to steer their tanks and attack the fortress. The cellist plays live music, while at the same time controlling the game to be a fun challenge for the players. Cello Fortress is an innovative experiment that blends concert and game.

Ruth John is an award-nominated digital artist, web consultant, speaker and writer, with 15 years of experience in the digital industry.

She’s a Google Developer Expert, is on the board of directors for Bath Digital Festival and in her career has worked for companies such as o2 (Telefonica) and BSkyB, and clients such as the BBC, NBC, Cancer Research UK, Heineken and Channel 4 among others.

Ruth also belongs to the { Live : JS } collective, which brings audio and visual code to life, in live performances across the globe.

DEEP is a meditative and psychoactive VR game that is controlled by breathing. Players don the Oculus Rift and the custom DEEP controller to explore a beautiful and mysterious undersea world. Allow the game to sweep you into its relaxing embrace as it teaches you yogic breathing techniques that can relieve stress, anxiety and mild depression. Take a DEEP breath and soar beneath the waves to meet ancient gods and strange lifeforms.

Line Wobbler is a one-dimensional dungeon crawler game with a unique wobble controller made out of a door-stopper spring and a several meter long ultrabright LED strip display. The entire game runs on an Arduino, including sound, particle effects and 60+fps.

Katharine Jarmul is a Python developer who enjoys data analysis and acquisition, web scraping, teaching Python and all things Unix. She has worked at small and large start ups before starting her consulting career overseas. Originally from Los Angeles, she learned Python while working at the Washington Post in 2008. As one of the founders of PyLadies, Katharine hopes to promote diversity in Python and other open source languages through education and training.

Melanie worked as a Senior Engineering Manager on XenClient at Citrix, where she led their Vancouver office. She was also the head researcher in the CSIRT at ING Bank, where she spearheaded their Analysis Lab and the ING Core Threat Intelligence Project.

404 is a unique event where you can network with over 40 meetup organisers and 30 top tech companies, connect with your peers, find out what’s new in tech and explore opportunities and collaborations, all in the iconic surrounds of the Royal Hospital Kilmainham.

All the Speakers, tech performers and installations have been crowdsourced by and for the Irish tech community. Be part of the Ultimate Tech Meetup on Saturday 7th October from 10am-5pm. To find out more about the event or to buy tickets head on over to 404.ie.