Horizon Zero Dawn was one of the highlights of this year as well as being one of the best PS4 exclusives in a very respectable library. Horizon Zero Dawn was a critical and commercial hit and quite deservedly so. In The Frozen Wilds, Guerrilla takes us high into the mountains to a place known as ‘The Cut’ where Aloy spends some time with the Banuk, a reclusive tribe we met briefly in the main game.

An Expansion That Expands

The Frozen Wilds is not endgame content, instead taking place before the conclusion of the main questline. The Frozen Wilds uses its 10+ hours to add some depth to the Banuk and gives us a fairly large new area to explore. We get to see the Banuk’s rituals and culture. The Frozen Wilds also adds weapons, costumes and new, deadly machines to do battle with in The Cut. These new weapons and costumes are purchasable from the merchants in The Cut, but only if you have enough bluegleam, a crystal that the Banuk use as currency. By the end of Horizon Zero Dawn Aloy will have a lot currency which is unfortunately useless in The Cut and you will have to complete some quests to afford some of the new bows and outfits.

the player will scale mountains, navigate woods in heavy snowfall and explore the decaying ruins of the old world.

I Think I’ve Heard This Story Before

The Frozen Wilds doesn’t mess with the near perfect gameplay of the base game, so it is a joy to play. The only criticism that can be leveled against The Frozen Wilds is the fact the story retreads some extremely familiar ground. There has been a new type of puzzle added which involves guiding a line from A to B. We also learn more about Sylens, one of the most interesting and mysterious characters in the main game. The new area is a joy to explore; the player will scale mountains, navigate woods in heavy snowfall and explore the decaying ruins of the old world.

The hunting of the deadly machines is still the highlight here. The game will swiftly punish any incautious player. The new machines that are added here present some new challenges. These new machines are especially good at closing distances between themselves and Aloy. There has also been a new skill tree added with some skills that are quite helpful. Aloy will now be able to harvest plants and loot bodies from the back of her steed. Aloy will also be able to break down resources and modifications for metal scraps which is very useful. 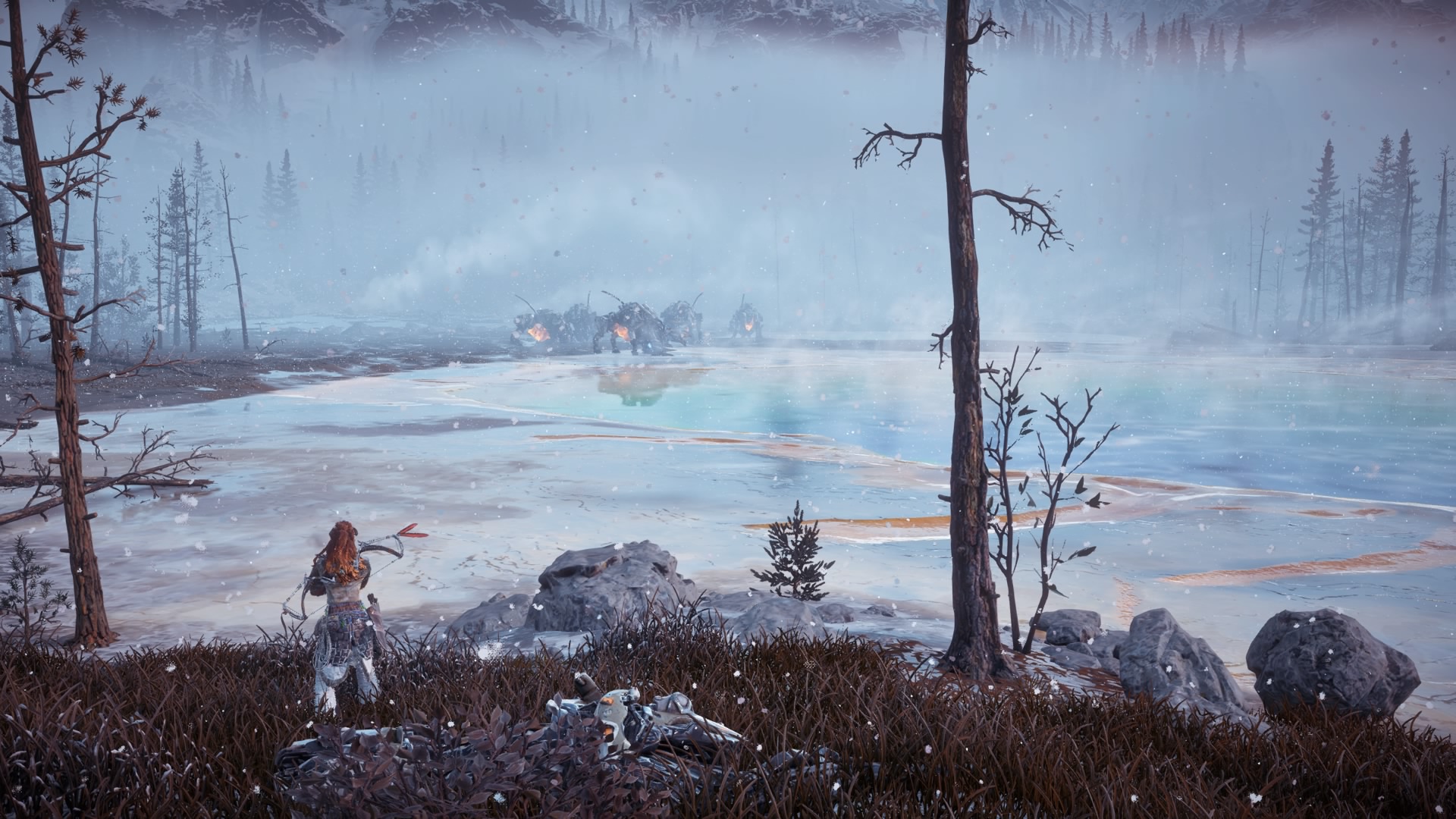 Graphically, The Frozen Wilds is stunning; it’s from a first party studio so every drop of power is squeezed from the PS4. The draw distances remain impressive and the weather effects are immersive. The character and machine design is of a very high standard, the new machines are among the best looking in the game. The sound design is excellent, the silence of the snowy forests being broken by the screeching of frenzied machines sounds fantastic. The voice acting is uniformly great and the writing is as strong as ever, with some very charming and amusing characters.

If Horizon was a MS exclusive, can you even imagine the name of the sequel??

Horizon 360 Dawn followed by Horizon One Dawn with a Horizon X Dawn DLC.