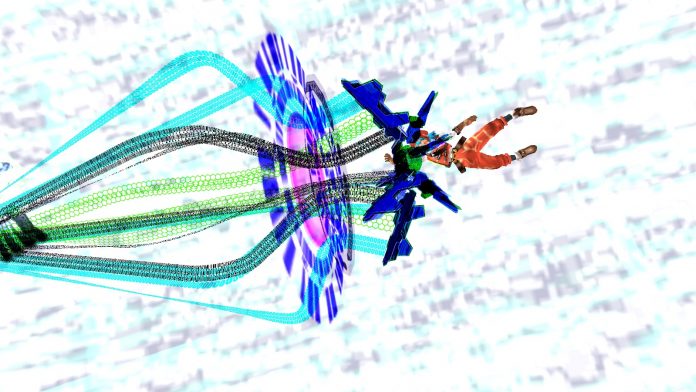 Now that the .hack//G.U. series has been re-released in the form of .hack//G.U. Last Recode, fans of .hack are now left wondering what’s next for the beloved franchise. As its 15th anniversary year comes to a close, many fans are wondering if CyberConnect2 and Bandai Namco are going to close the year with a new .hack announcement since it’s been 5 years since the last game release with .hack//Versus (which was never released outside of Japan).

The biggest question that seems to be on fans minds is whether or not the original series–commonly called IMOQ (for .hack//Infection, Mutation, Outbreak, and Quarantine)–will get a remastering like G.U. just did. It’s arguably just as beloved as G.U., generally considered to be more iconic than G.U., hasn’t had an official digital re-release of any kind despite being the roots (no pun intended) of the .hack franchise, and like G.U., its rarity has caused prices on the English versions of the games to inflate ridiculously, rendering many potential players simply unable to afford playing the series. The final game of IMOQ, .hack//Quarantine, is considered to be the second rarest and most expensive game on the PS2 (second only to Rule of Rose) usually costing anywhere between $150-$200 (£114-£152) depending on its condition.

On a Twitter post made hours ago, CC2 confirmed that they’d be open to the idea of re-releasing IMOQ in HD “if the demand is there.” Being a lover of IMOQ, I’ve actually started a tweet with CC2 tagged in it for people to like/retweet to prove that the interest for getting a re-release of IMOQ is there. Especially rolling off of the success of Last Recode, if ever there were a time for fans to sound off about wanting a re-release of the IMOQ series, it’s now.

EDIT: Correction, the first .hack series was released in Europe in 2004 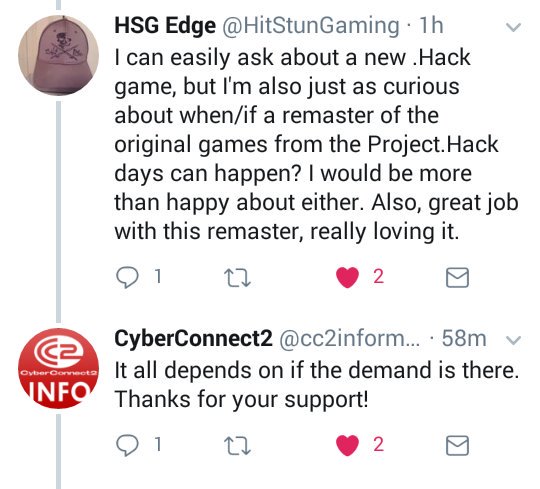 Just a little correction: IMOQ did come out in Europe in 2004. We just didn’t get GU (until Last Recode).

Looks like you are right! I am sure KenParx will fix it soon

Thanks for the correction, fair user 🙂

Don’t mention it 🙂 I live in Italy and I’m just one of those who bought them as soon as they came out, so I know for sure.

This Twitter is run by one person. This is how he responds to any fan requests for any new games.

He still reports to the official Japanese offices. Also many of the heads of CC2 follow that twitter. It’s an official account. They reply that way because they can’t say yes or no. Anything is always a possibility, it’s just a matter of cost and demand. If the demand is there and the cost is not too crazy then it’ll happen.

totally, it beats paying $200+ for 1 game each on ps2, would also feel like a english translated Fragment would be involved pleeeeeeeeeeeeeeease

Yes! The original .Hack games were my favorite! They still give me chills during gameplay 10+ years later.

Don’t really have a twitter though – is there some other platform that the company is collecting responses from?