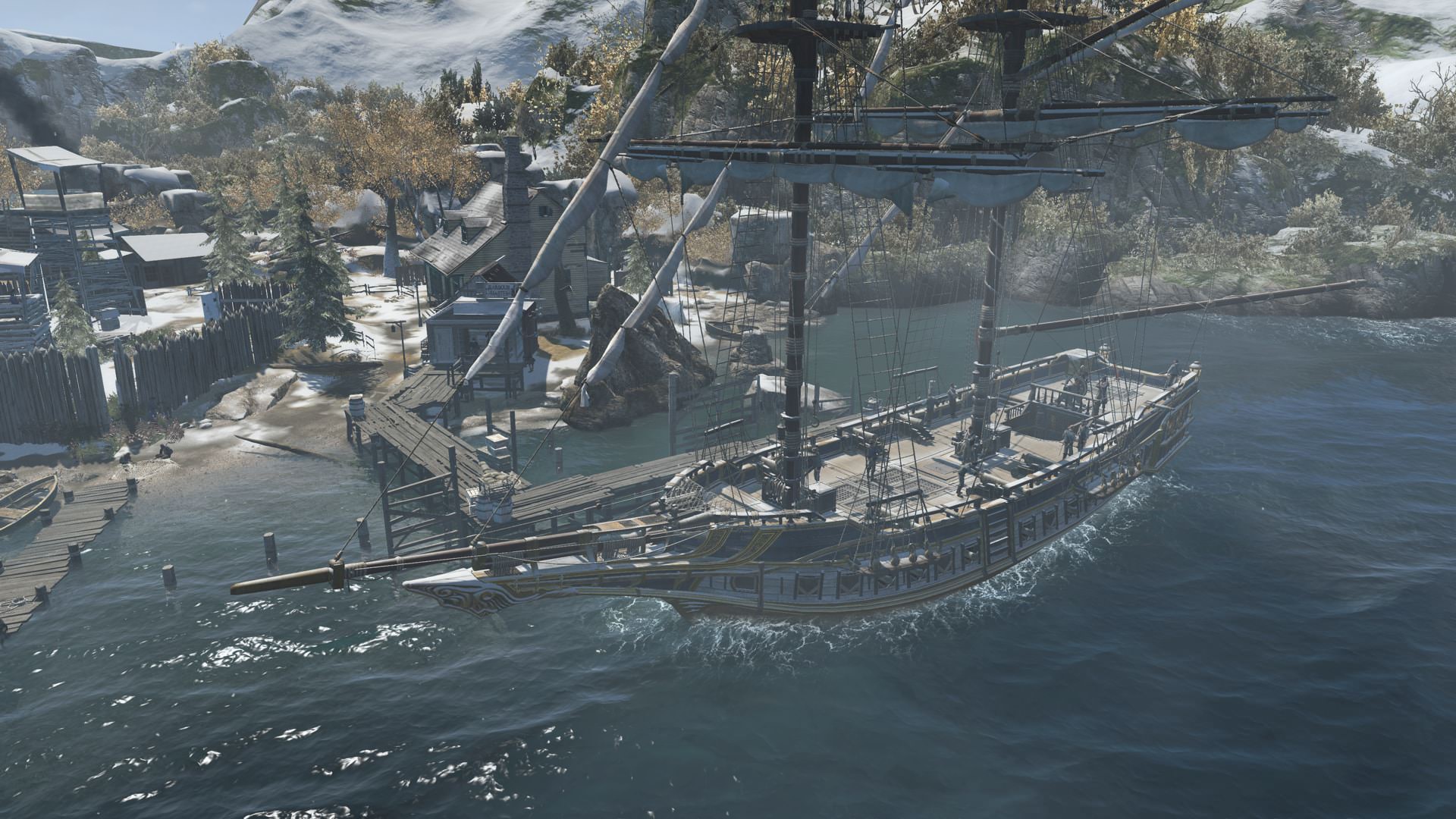 Exactly which of the completely understandable reasons that Ubi would remaster a game still warm from it original pressing is open for debate. Was it the hype train surrounding Sea of Thieves? Or was it the astonishing success of their franchise refreshment? Either way, Assassin’s Creed Rogue was the last entry in the 7th-generation history of the chronologically-taxing story and it often feels like it.

In the Wake of Larger Vessels

The original Rogue was a high-seas, North American adventure that acted as a sequel to Black Flag. It shared the same focus on piracy-style battles with maritime exploration that garnered praise in Black Flag but it also released the same day as the gen-8 exclusive Unity.

Added to this pre-launch overshadowing, Assassin’s Creed Rogue had the wind taken out of its sails by Unity‘s poor state at launch and the meme-a-thon that followed.

There are also obvious comparisons to be made between this and Origins. The free-running, land-combat and missions feel so ‘last-gen’ after the Egyptian adventure. As if the era before and after Origins should be labelled B.O. and A.O. to reflect its watershed significance in the Creed chronology.

For players who have settled Rogue‘s score, there isn’t all that much to warrant another purchase. Players who want to round off a collection or re-experience the game in higher native resolution and at a much better frame-rate will find enjoy the technical aspects of the remaster.

If you missed out, Rogue comes with plenty to see and do to make it worth your while. The plot is not essential to the overall story and it feels ancillary, it does provide a glimpse into the Templars in North America within the AC universe. Rogue also does its job of linking Black Flag to Unity but this significance has been lost by returning the more distant past in Origins.

The Templars are seeking ‘Pieces of Eden’ around the globe. When two natural disasters occur in areas where the Templars have been searching, the Brotherhood conspire to find out more. The over-arching AC theme of stalking and eventually coming to blows with a clandestine organisation acting under the protection of a government or monarch is done exceptionally well here. The plot twists are entertaining, if a little plot-convenient.

Assassin’s Creed Rogue tells the tale of Shay Patrick Cormac, an ‘Irish’. Shay-Shay’s accent is just awful. This games numpty cannot be sure how people talked back then as MP3 technology was young and any recordings of folk from the era are hard to make out but surely, speaking in such a fashion would have been frowned upon.

Cormac is the titular rogue, bantering his way through the game with a twinkle in his eye. But he is very annoying and increasingly unlikable. The supporting cast is the AC old-school of camp versions of historical figures amongst comic-book heroes and villains. Aside from Shay, the characters aren’t objectionable; just a little typical of the series.

A Game of Two Halves

Rogue is best when the player is searching and stalking. The spectacular maps haven’t really aged in 3.5 years nor has the leap across a generation paled its environmental visuals much. Rogue could pass for an early Xbox One/PS4 game with a couple of pints in you.

The Morrigan and the beauty of the map make exploration around the hundreds of islands engaging. Upgrading your vessel and laying waste to progressively larger ships and aquatic mammals is satisfying as well as commercially rewarding. A player will be forced to gather resources for boat repairs as well as recruit seafarers to make sure their vessel is filled with seamen. Sentences best not taken out of context but I am going to do it anyway. (See blockquotes)

Naval-combat is intense even after our ship has acquired a god-like capacity for damage after a few upgrades. Players will enjoy the relatively easy ship controls and how wind strength and direction affects their speed and manoeuvrability. The 360-degree cannon system gives a level of strategy beyond move’n’fire.

However, parts of Rogue feel stiff and imprecise in comparison with games native to today’s platforms. Free-running is often a pain and combat is laughably easy until it too becomes a chore. Assassin’s Creed: Rogue will have you spending a lot of time in forests or at clifftops where the ambulation system and animations are tested beyond their limits. Their lack of smoothness and grace was annoying but acceptable even a few short years ago but is far more detrimental to the experience nowadays.

The combat system of ‘hammering attack until a red button pops up, then counter and repeat’ is stale and lacks challenge for the majority of the game. Rogue just adds more enemies so you need to counter more often and dodge the odd bullet. By the time the genuinely horrific gang-banging begins later on, a player may be tired of the rhythm-game combat, greeting each inescapable land-battle with a tired sigh.

Collecting sea-shanties is the worst offender, chasing the notes in an albeit brief free-running section isn’t even fun the first time with the clunky controls

There is a huge gulf in the quality of missions between the excellent Origins and Rogue. Bayek’s quest is light on map-bloat, easing off on fetch-quests and collectables. However, once Shay leaves the ship he is thrust into a world of tiring busy-work. Collecting sea-shanties is the worst offender, chasing the notes in an albeit brief free-running section isn’t much fun the first time with the clunky controls. Players will likely ignore these thereafter.

Each one of Assassin’s Creed‘s open-world sins are here for players to groan at. There are so many perks, weapons, items and upgrades for everything. These demand some serious time investment if a player wants to make the main quest a little easier. Or just wants to deck Shay-Shay out.

Even the main-quest-itself descends into a slog. Assassin’s Creed Rogue endlessly makes a player traipse to and fro for every maguffin, punctuated by combat. When in a ship, this cycle might eventually outstay its welcome for some players but on land it gets tiresome much quicker.

Sounds of the Sea

The soundtrack for Assassin’s Creed Rogue is beautiful in its simplicity. A player will be serenaded by their crew with some modern versions of authentic ship-going songs. There are quite a few to start with but a player is forced to undergo some aforementioned note-chasing to unlock them. 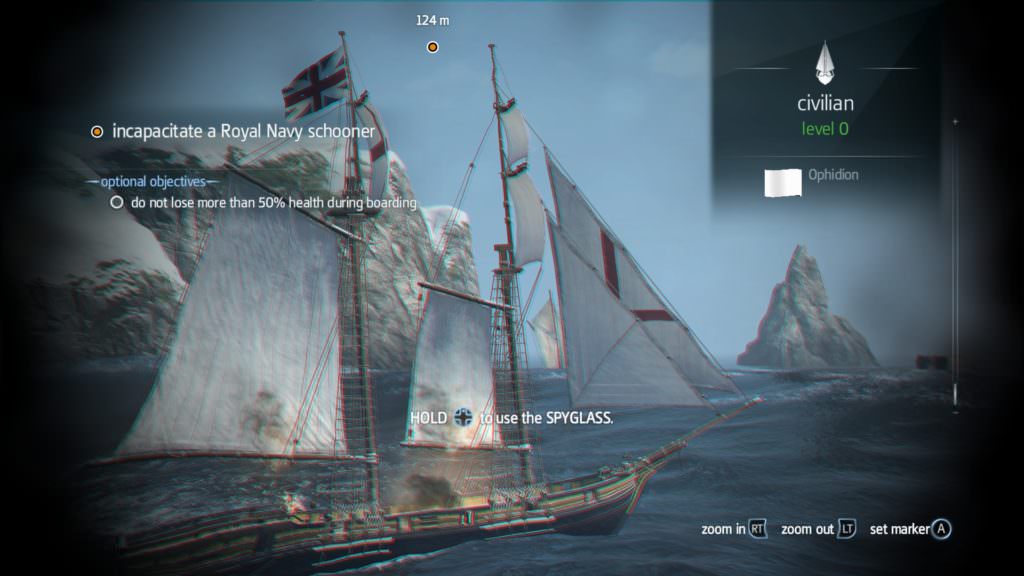 The sea also adds a wonderful ambient noise to most of the game that players will find relaxing. Something that is impressive in a game where enemy NPCs get slyly shivved or punctured with cannonballs on a per-second basis.

The visuals, the seafaring and the story all hold their own after a few years

I feel that some mechanical effort is usually required to make a remaster more playable for contemporary audiences. However, terrible controls and awkward layouts clearly have their charms for the vast majority of people. A trend most hilariously seen with the free passes handed out en-masse for PS2-era remasters and remakes lately.

The visuals, the seafaring and the story all hold their own after a few years. But other aspects of the game are really put into perspective by the release of Assassin’s Creed Origins. Combat, map-bloat and general mission objectives remind us how much Ubisoft have done to breathe new life into the decade old series.