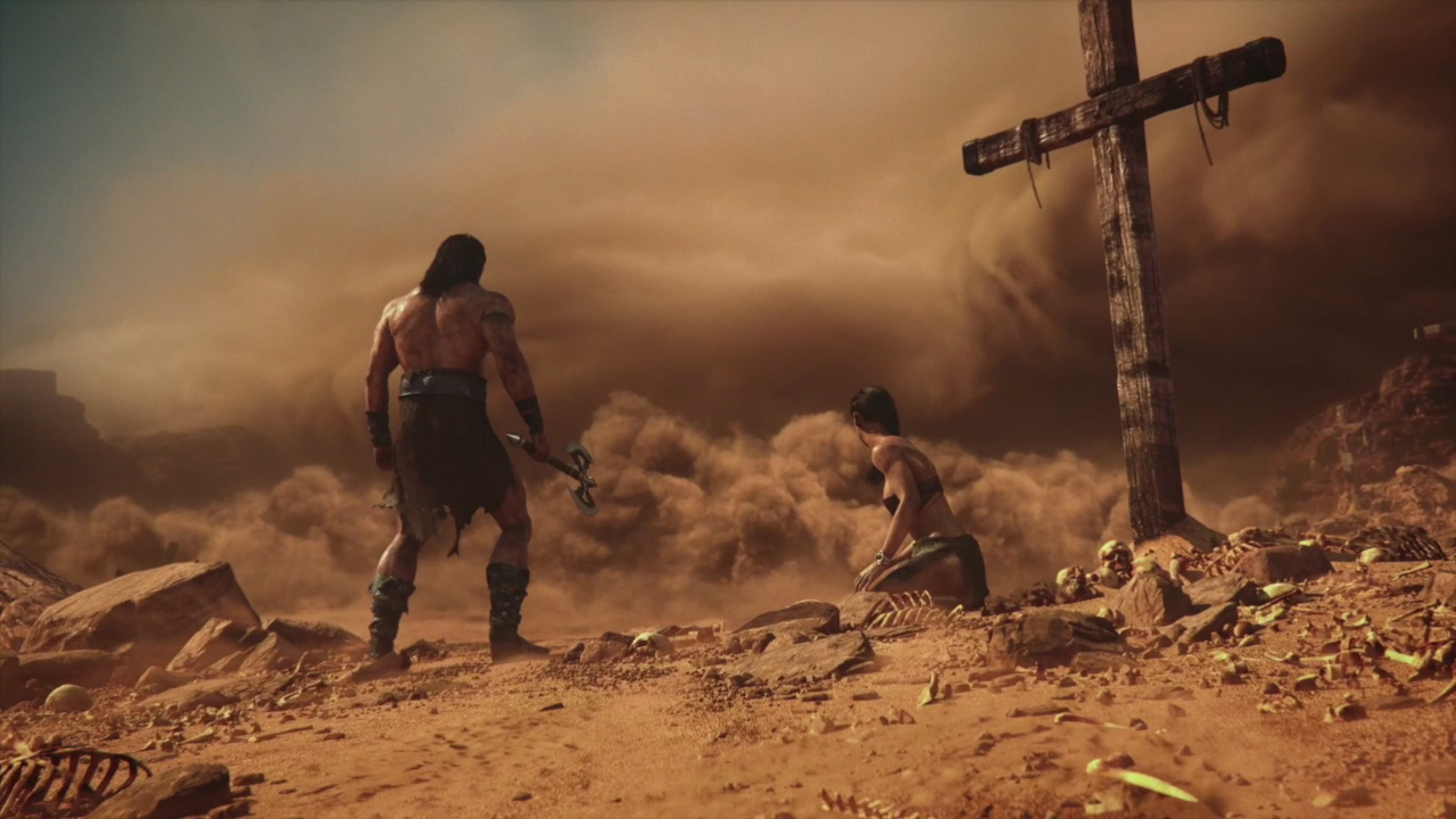 Not many games arrive with a story as interesting as Conan Exiles. Stuck in a public development hell for years, CE‘s intial PC launch was not well-received. The game had a lot of potential despite its horrible interface, instability and lack of meaningful game content. There was enough public interest to keep PC Conan Exiles under construction until recently and the game is now a far from serviceable alternative to Ark set in a brutal, unforgiving and relatively convincing Conanverse. 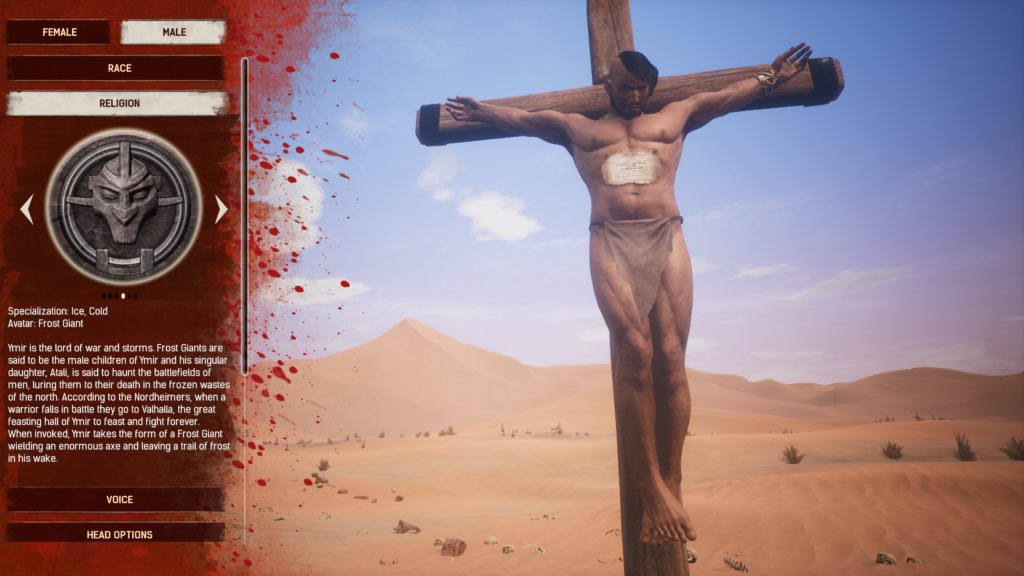 The console version, however, faces many of PC Conan‘s greatest technical and design foes. It even adds a few more to contend with, like DLC based around gaming hardship. Console Conan is genuinely abysmal.

A survival game needs to give players a reason to live. Bit like real life, I suppose.

A Kind of Storied Start

Regardless of whether players play a single-player/co-op game or a PvP/PvE online game, players begin as a choice of male/female character. One finds oneself being crucified for poor grammar (I would happily live there) and small list of other crimes. Over the hill rides Conan who does something horrible to you. He lets you live to play Conan Exiles.

Players are given minimal instruction on what to do bar check their journal. The journal contains a dispassionate list of simple actions to complete in-game that serve as missions. Missions like ‘Kick’, ‘Eat’ and ‘Find signs of intelligent life’ seem like a joke and after a dozen of these, it becomes clear that these are the best that Conan Exiles has to offer.

The devs intend for players to organically discover the game’s mechanics and eventually become powerful enough to roam freely and discover the map. However, Conan Exiles does nothing to encourage this. It doesn’t even seem to want to tell you why you should bother doing anything. The levelling system seems so detached from ‘learning’ or ‘achieving’ that I found it hard to care when the usually-gratifying increase in numbers occurred.

There is a barrier that good free-roam survival games face when trying to foster longevity. A survival game needs to give players a reason to live. Bit like real life, I suppose.

Ark teases with dinosaurs and an exotic, otherworldly map. The Long Dark still has me pining to understand what happened to the edge of the world where Mackenzie finds himself. Conan Exiles has nothing beyond its license and its borderline unfair challenge.

The grinding and plate-spinning that accompany the genre are here in abundance but it’s not a compelling slog. For the purposes of this review, I had to play far beyond what I would have managed without it being a job. There is nothing to see beyond a couple of hours and thanks to the terrible interface and controls the learning curve is more like an invisible vertical line.

The devs even forgot to change the text in a lot of the journal to reflect the control scheme… RMB does what now?

The PC interface is not particularly user-friendly. But when it is dragged wholesale to a more limited control scheme, it becomes a nightmare. Absolutely zero work has gone into streamlining the slow, impenetrable menus for console. It takes about eight buttons presses to build anything. Moving items around the hotwheel is like a mini puzzle-game. Equipping straight from the menu is impossible.

The devs even forgot to change the text in a lot of the journal to reflect the control scheme. RMB does what now? 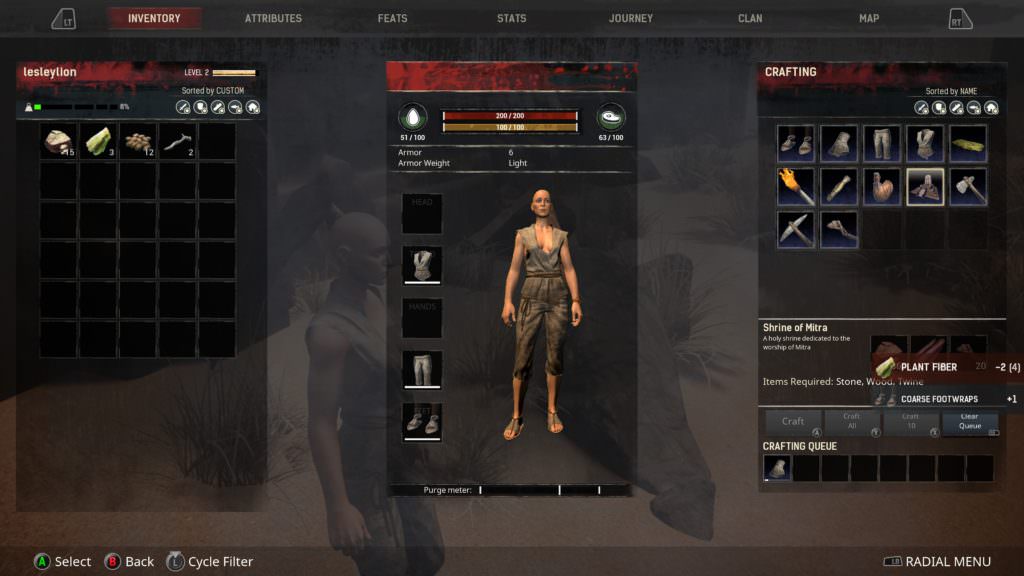 The RPG elements are an afterthought at best. I simply didn’t feel any more powerful beyond a better set of stabbers. The pay-off for the immense grinding seems so minimal that the horrific menus twist the knife as you finally gather the resources to craft something. Why does Conan Exiles punish me so? I feel like it’s personal at this point.

The menu is also a little slow to open and there is no way of calling up the map – players access it via the slow menu.

Conan doesn’t justify the hour you grind for a house

After discovering the menu for yourself and dying at first contact with humans or human-shaped AI, players will learn that Conan Exiles tries to base a game around a limited survival and base-building mechanic that doesn’t work well. To extend this, the game has ridiculous high resource demands for everything. A sword. A piece of thatched roof. A shrine. All requiring unnecessarily high skill levels, resources etc..

Many survival games find themselves with demanding build-lists but the payoff is usually there. Conan doesn’t justify the hour you grind for a house. The half-hour it takes to learn to build a house. The wasted resources when components will not line up properly. 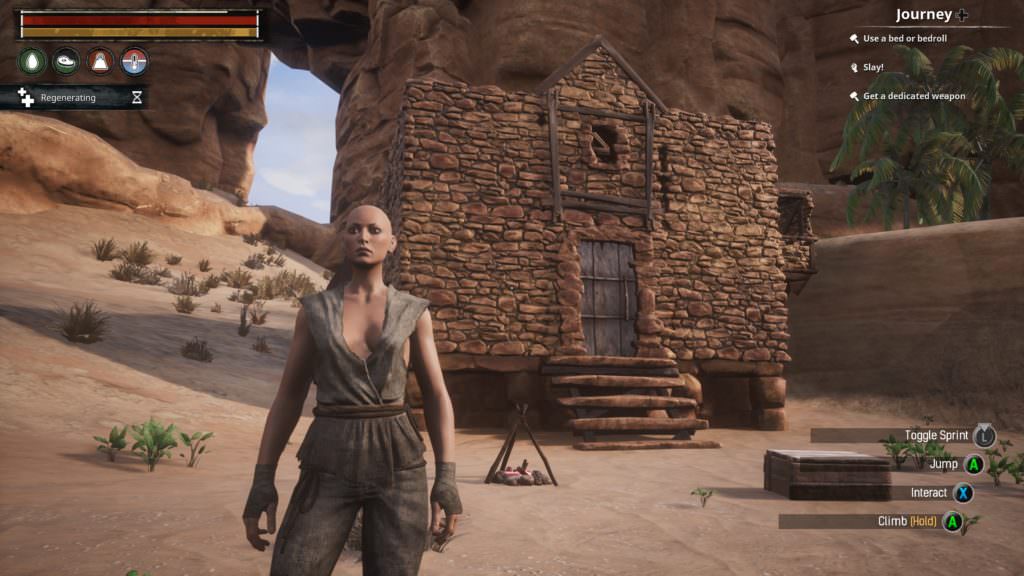 Since nothing is explained all that well, this games idiot had no idea how to learn to craft certain rudimentary items like skinning daggers, iron rods or lingering essences. They just appeared from nowhere and I could complete ‘the Journey’. Religions seem like a meaningful mechanic whereby the players diverge and eventually become distinct but they are just another ill-explained skin on a basic vending machine.

When you fight dEaThHaMmEr69 or MEGATRON420 in a PvP, they are screaming at their TVs and wrestling the interface so We are all being shafted at the same time; it feels fair

With no tutorial and a journal that explains everything in mouse & keyboard, a player will naturally head to single-player to learn what they can. That’s a mistake. The single-player co-op game suffers the most from the sparse world that has nothing of note to do.

The only real pressure comes from the glitchy AI inhabitants – but they are merciless. A single human AI at your level is no problem but any more is trouble. The lock-on system doesn’t work very well with more than one enemy and frequently failed to stay on target when we went toe-to-toe. Imagine a melee lock-on that spazzes out when you get within reach. Hit detection is laughable with or without lock-on. There were occasions when the enemy suffered knockback and animation interrupts but took ZERO damage.

When the game throws a heavy your way, your early armour will break immediately and then each strike will take half your health. Rolling away and avoiding a melee weapon is hit’n’ miss – often the blade or bludgeon will be shown to miss a player yet the damage was done. Vortexes? 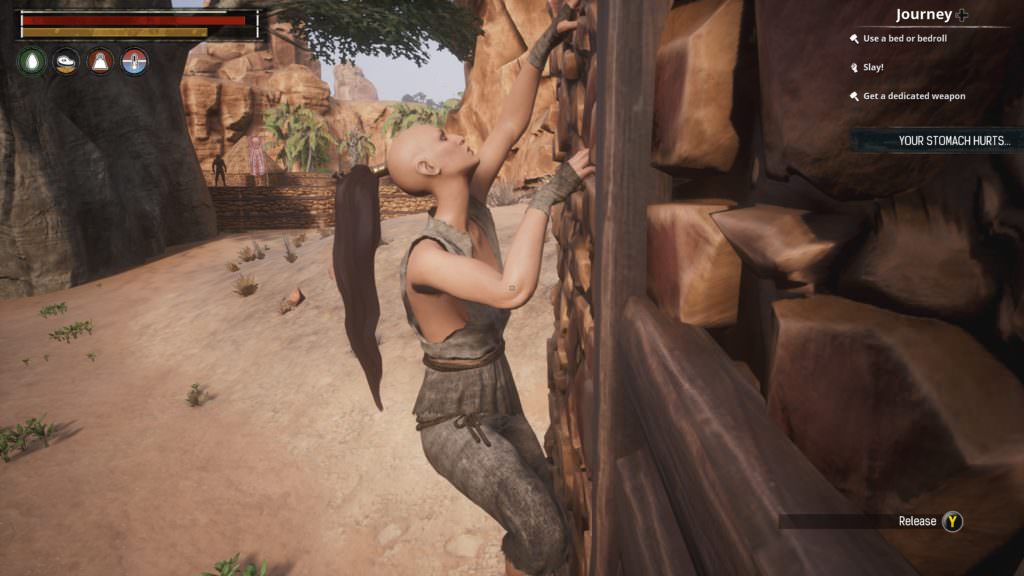 These issues are far worse in single-player and PvE modes for the simple reason that what you fight here doesn’t have to play by the same rules or suffer the same problems. When you fight dEaThHaMmEr69 or MEGATRON420 in a PvP, they are screaming at their TVs and wrestling the interface. We are all being shafted at the same time so it feels fair.

From the sparse map to the awful graphics and sounds, it screams ‘incomplete’

The developers genuinely deserve credit for fostering a cold-hearted and ruthless community. Playing PvP is truly the only way to enjoy Conan Exiles.

The feeling of residing in a intentionally cruel, living hell is best conveyed in PvP. The world of Conan himself is a dog-flay-dog dump thinly covered with the remains of civilisation and Conan Exiles seems no different when real people can kill each other in it.

EliteGamer.com has frequently chided games for having spoil-sports and knobheads ruining their multiplayer but with CE; the worse the public gets, the better it is. You will only ever team up when you are reasonably buff and you find someone who is scared of you. A player will then think about when they will be ambushed for the entire two minutes the alliance lasts. The rarest of things can happen when somebody else ambushes an uneasy alliance; people actually cooperate and the world seems a little smaller. Until everyone turns on each other. 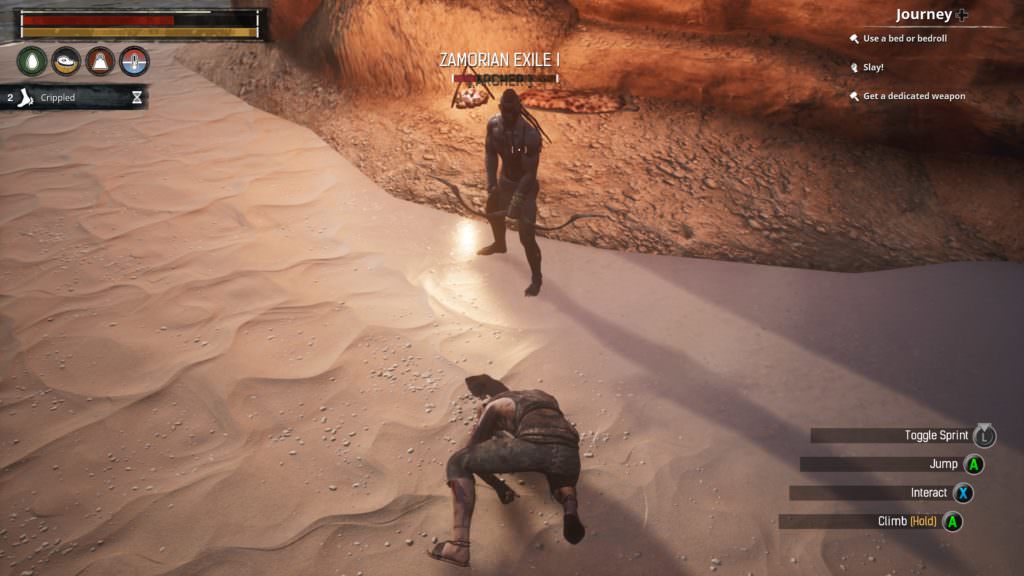 This fear of betrayal and unending battle mentality helps players intermittently forget what a mess Conan Exiles is.

Conan Exiles goes beyond a lack of polish. From the sparse map to the awful graphics and sounds, it screams ‘incomplete’. Before the game even begins, we are treated to a pixelated and outdated-looking cut-scene. It looks like a place-holder.

The myriad bugs and technical issues permeate every aspect of the game. The aforementioned lock-on and collision detection ruins combat. Awful clipping and poor interface sully the already poor building. Random crashes and dropouts are very frequent, you will need to find a stable server and cling to it for deal life.

There is a little potential buried underneath the rubble that is Conan Exiles. The world, though sparse and slightly ugly does fit the license. The PvP is suitably unforgiving, the challenge of surviving the game brings out the worst in people and the best in the game.

3.6/10 is rounded to 2 stars out of five.
But I can see why you are confused and I will get trying to clear that up.

Thank you very much for the feedback.