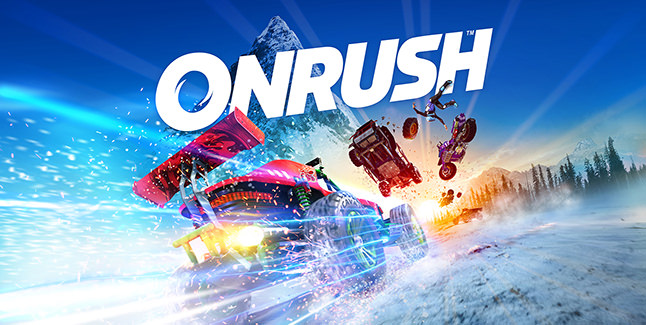 In an effort to break the realistic driving sim trend that seems to have plagued this generation, Codemasters have put out Onrush.

Just to clarify for readers, if one is looking for a racing game i would give this one a miss. Mirroring the 2000’s era of bats**t crazy Motorstorm and Burnout fame, Onrush makes this writer realise what digital petrol heads were missing. Fun.

The premise of Onrush is to rip each other apart by smashing, landing on and rear-ending opponents for team points. This is reinforced by the titles encouragement to boost the s**t out of your selected vehicle over ramps, hills, canyons etc..

Each team of 6 can, for example, have tanks that can absorb damage and boosters that can distribute extra boost just for being near team mates. This system alone kicks Onrush up a gear into some fun and competitive online play.

Boost is gained by partaking in all of the aforementioned activities. Using boost and collecting tokens along the track eventually unlocks players vehicles rush move. This is more or less Dragon Ball Z boost which dominates the opposition and let’s you takedown more enemy automobiles.

Whatever you want, bar a race.

Onrush wants players to stay in the action and moves away from the ‘fastest wins’ status quo. The title teleport players into the middle of the action if they lag too far behind which keeps things interesting.

All game modes are points based which deters speed freaks and encourages bulldozing. Onrush also randomly spawns ‘fodder’ vehicles that can be smashed up in one hit. This turned out to be a great boosting mechanic.

Speaking of game modes, there’s four all together:

Countdown – Delay the end game by hitting countdown gates to give teams extra time on the track.

Switch – Each driver has three lives. If they get wrecked or wasted, players can jump back into the game with significantly powered up vehicles

Lockdown – The players team tries to maintain a moving area of track for as long as possible, whoever has most control by the end wins

Whilst all four modes are fun and bring variance to a game that could easily become dull, ‘Lockdown’ needs a polish. The area players control moves quite slow given Onrush‘s mantra. Codemasters have stated that free content updates will along with all copies sold, would be nice if the ex-Evolution Studios guys and girls could tweak this a bit

To ramp up the competition, players are given a choice of 8 vehicle classes to choose from also. This reviewer won’t go into the full details on this as it’s fun to discover for new players. Classes gives Onrush its competitive edge and builds on the metagame that is blatantly on display.

Each team of 6 can, for example, have tanks that can absorb damage and boosters that can distribute extra boost just for being near team mates. This system alone kicks Onrush up a gear into some fun and competitive online play.

No Lag, No Mercy.

Online match making is very polished and smooth, although joining games post match making can take a couple of minutes. None the less a bit of wait time is to be expected which is compensated for by the games reliable match making. One found a smooth and engaging online experience, something a lot of day one releases fail to execute correctly.

This writer could easily see Onrush turn into a tournament runner, the match types and classes alone make for exciting viewing and driving. Score summaries and statistics cements the develops intentions, turning key performance indicators such as most takedowns and most valuable players into a grand pissing contest.

Presentation overall is pretty great too with its simplistic menu system. It’s fast and does its job, wasting less time fiddling about and more time to smash. Textures on environments and vehicles are also well made and hold up to the current generation. Although it’s a given they are far from the photo realisism of the racing sim genre, players are too busy knocking vehicles the F out!

Sound effects are all spot on, nothing worse than crashing into a car and it sounding like a tin pie case. The soundtrack is also compiled of original artists that provide some great carnage music. Not metal carnage, but it keeps up with the pace set by Onrush.

Onrush is a much needed refresher in the driving game genre. In this writers opinion, Onrush could go on to start its own tournaments and may have a future in ESports. A fun and destructive ride that’s easily accessible, but it’s not a racing game by any means. Oh, and free content updates.