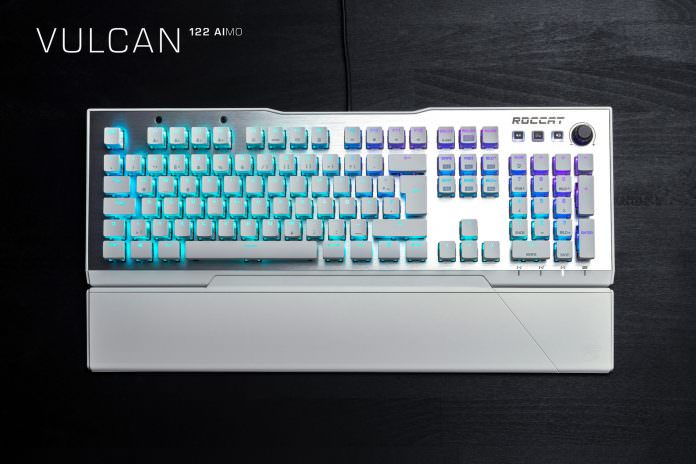 ROCCAT had a lot of peripherals from the AIMO series to show off at Gamescom this year. There is the brand new ROCCAT Kain AIMO Mouse series with an innovative click mechanism for more speed and precision. Two new versions of the Vulcan mechanical keyboard were also presented and finally, the ROCCAT Sense, an LED Mousepad, has also joined the AIMO family.

The ROCCAT Kain is a brand new gaming mouse series, developed under the premise of the best clicks and highest precision. The series includes the innovative ROCCAT Titan Click, which registers clicks up to 16 milliseconds faster than any other mice and thus makes the Kain the fastest, most reactive mouse on the market. The design now looks very clean and without added features such as a thumb rest. Combined with a weight of 89 grams, the Cain provides optimal grip and excellent ergonomics. Along with the super-fast response time, the Kain will surely give you an advantage over other players.

The Kain series includes three models, both wired and wireless. The entry-level version, the Kain 100 AIMO comes with a rubberised side surfaces for maximum control and an optical sensor with R8 8,500 dpi. The mid-tier mouse, the Kain 120 AIMO has a unique, hybrid performance coating that is durable, stain resistant, easy to grip and feels extremely good in your hand. In this model, the updated Owl Eye sensor provides up to 16,000 dpi. The third model, the Kain 200 AIMO with the latest wireless technology will be available for €99.99 this winter.

The Vulcan 120 AIMO keyboard is already available on the market and included the “Titan Switch Tactile”, a mechanical switch developed in-house by ROCCAT. The Vulcan’s design was also recognized after winning the prestigious iF Design Award 2019 in the product category. At Gamescom ROCCAT showed off two new models, the Vulcan 121 AIMO in Ash Black with the brand-new titanium “Titan Switch Speed”. Following the success of Titan Switch Tactile, installed in all previously released Vulcan keyboards, ROCCAT now offers a new, faster option.

Designed for speed, the titanium speed switch has a shortened release point at 1.4 mm (2.8 mm actuation), thereby giving it a 30% faster response time than conventional switches. The switches operate with a force of 45g in order to minimize accidental key presses, optimal for gaming. To compliment the Ash Black color scheme, ROCCAT also presents the Vulcan 122 AIMO in Arctic White. All versions of the Vulcan will be available for €159.99.

The ROCCAT Sense Mousepad is now also part of the AIMO family. With the new mouse pad, the AIMO universe is bigger and better than ever, for a more comprehensive lighting setup. It’s the perfect complement for the AIMO lighting system. The surface is soft cloth with an anti-slip rubber underside and measures 353x25x3.5 mm. It is also framed by a powerful RGB light guide with two programmable zones. Overall, it’s a solid mouse pad, which is equipped with a cute gimmick. The Sense AIMO mouse pad will be available early September for €39.99.

Check out what else we saw at Gamescom 2019 here.