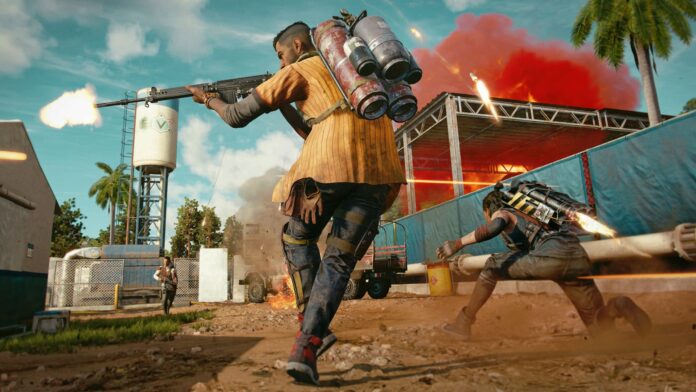 Far cry, we meet again. The Far Cry series and I have had our ups and downs. Far Cry 3 for me still symbolizes the peak of the series, while the most recent game Far Cry New Dawn feels like the series low point. Now Ubisoft is proud to present Far Cry 6. Ubisoft make the bold claim that with Far Cry 6, the series returns to its roots and for the most part they are right.

The fact that Ubisoft now label their games as “A Ubisoft Original” is quite ironic to me. Especially when we talk about Far Cry 6. The first-person shooter is set in a fictional country called Yara and we play as Dani Rojas, a, resistance fighter. You are up against the dictatorship that rules the country. The world of Far Cry 6 is huge and visually very impressive at times. Ubisoft knows how to create a visually appealing world. From the clear oceans to the overgrown jungle, the world of Far Cry 6 is a tropical paradise. Just like in the previous games, there is plenty of life to be seen. From the normal working farmers to the exotic wildlife, the game feels like a true Far Cry game. Especially when you take a look at the sandbox.

Far Cry 6 is at its best when it does what makes all Far Cry games great; sow complete chaos. The arsenal at your disposal is very extensive. From the do-it-yourself weapons to the backpacks from which missiles are fired, Far Cry 6 knows how to spoil the player with the best toys. When the frenzy breaks out and you cut everyone in half with your adrenaline boost like Wolverine with rabies, then it’s fun. You can also use fire-breathing tanks, planes and your own killer croc. Sounds good, right? It is. It’s the ultimate B-movie action and that’s what makes Far Cry so fun to play. Unfortunately, this gameplay loop is interrupted too often.

Yup, A Ubisoft Original. What does this mean guys? Quest lines that don’t know when to cut off, hundreds of collectibles and missions coming at you at a rapid-fire pace. I remember I was super excited to behead an important figure, but what did we do before that? A ten-minute boat ride and an NPC I’d never spoken to before, chatting my ears off. Far Cry 6 has a very nice combat loop. That’s why I’m very sorry that I get ripped out so often. Some games have that. Short breaks to enjoy the story and recover from the action. The breaks in Far Cry 6 aren’t short, though, and speaking of the story, there’s not much to enjoy.

Just to rip the band-aid off in one fierce move, I don’t think Far Cry 6 has the best story the Far Cry series has to offer. It’s not terrible, but unfortunately I can’t call it good. This is due to several factors. Let’s start with protagonist Dani. I chose the female version of this resistance heroine. What is immediately noticeable is how Dani has very slightly the traits of Jason from Far Cry 3. But where Jason Brody’s journey from student to legendary warrior took the lead in the story, that is not the case with Dani. She occasionally says it’s cool to blow shit up. Yeah, not that she’s wrong, but that’s not exactly the same levels of intensity I’ve seen in other Far Cry stories.

No, Dani is primarily motivated by revenge. The thing here, however, is that this plot piece is presented almost immediately, just before we get to know Dani and her friends, so I don’t have much sympathy for her. A protagonist with a lot of emotional pain is not necessarily interesting. Besides that, Dani doesn’t really have anything interesting to say. Dani and Ethan from Resident Evil Village can have a discussion together at the table and see who falls asleep first.

So Dani isn’t much fun to listen to. But what about Anton Castillo? Breathed into life by none other than Giancarlo Esposito. His work is again good. It’s not his pinnacle, so don’t expect a performance on the same masterly level as Gus Fring in Breaking Bad, but his class and charm are certainly there. There is, however, a problem. The interaction between the protagonist and Castillo is quite minimal. This ensures that the conflict itself is not very gripping. Let’s make a comparison with the golden boy Far Cry 3. Vaas is a masterful antagonist, because he constantly confronted Jason. Dani and Castillo do fight, but almost always from a distance. So it also feels like you’re observing the story from a distance, when you just want a Far Cry story to grab you by the balls and not let go.

Furthermore, the cast of characters is considerably expanded in quantity, but not in depth. I’m not a fan of the way these characters are written. They can all be summed up in a number of key concepts. They are way too confident for the situation they are in, they give Dani stupid nicknames and they yell a lot of “fuck”, “merda” and “coño”. Underlying motivations, ambitions, etc. are often not expressed. Except with the Castillo family, ironically. Sure, their motivation is to free Yara from the diabolical evil aka the government, but real ambitions that would give them personality are nowhere to be seen. Besides the mediocre writing, the cutscenes don’t work optimally. The frame rate is often substandard and the lip sync is not good. All factors together make for a pretty mediocre story. Better than New Dawn, but definitely not the best this franchise has to offer.

I just want to give Far Cry 6 a compliment. Yes, really Ubisoft, don’t worry. The options they give the player in terms of accessibility are very strong. For example, I wasn’t a fan of the health bars they showed on the enemies. I could just turn it off. You can also tweak the whole game experience and it’s nice to see that this is becoming the norm. Adjustments to your HUD, controls, use of colour, and so on, it’s all possible in Far Cry 6. Hats off, Ubisoft. They even have a voice-over enabled when you first launch the game, the same feature they included in Watch Dogs: Legion

Ubisoft also has crammed a ton of content into this game. Various storylines, Special Ops missions, races, hunts, liberating bases and the list goes on. Do not you believe me? Then I continue. You have a Street Fighter-esque mini-game where you fight your rooster, you can play dominoes, you can blast big anti-aircraft cannons and I’m forgetting a few items on the Ubisoft shopping list. Sounds like a big pill, huh? So much to do, so little time. Far Cry 6 is full of content.

Although it’s good that you have so much to do, sometimes it seems like they make it so gigantic on purpose. Think you don’t have the best weapons in time? Or the best armour? Want to buy some extra crafting materials so you don’t miss out? Yes, buy. You read it right. Far Cry 6 has micro-transactions. I can’t even call them pay-to-win. Rather, it is pay-to-not-play. Do you need these micro-transactions to unlock cool stuff? No, absolutely not! However, it is a bit of a shame that you see that part of the design of this game is aimed at pushing this system. Additional items, such as exclusive crossover packs, can also be purchased. It feels unnecessary, but it is up to the player to determine with their wallet whether these practices should be supported. My answer is and remains: no. Do you want these kinds of systems to no longer appear in games? Then don’t buy extra junk.

Far Cry 6 is everything you expect from a Far Cry game. The massive open world is a visual sight, and when you can get started with that familiar Far Cry gameplay loop, there’s fun to be found in this first-person shooter. The vast arsenal of vehicles, weapons and other special abilities serve as a strong core of the sandbox. It’s therefore a bit of a shame that Far Cry 6 tries to stray from it so often. Dani as a protagonist isn’t particularly interesting and the other characters in the story are often very superficial as well. Even the big bad guy Castillo just doesn’t manage to convince, because the interaction between him and the player is lacking. When Far Cry 6 has finally got going, there’s bound to be some chaotic fun to be had, but it’s too much of a leash on the player.