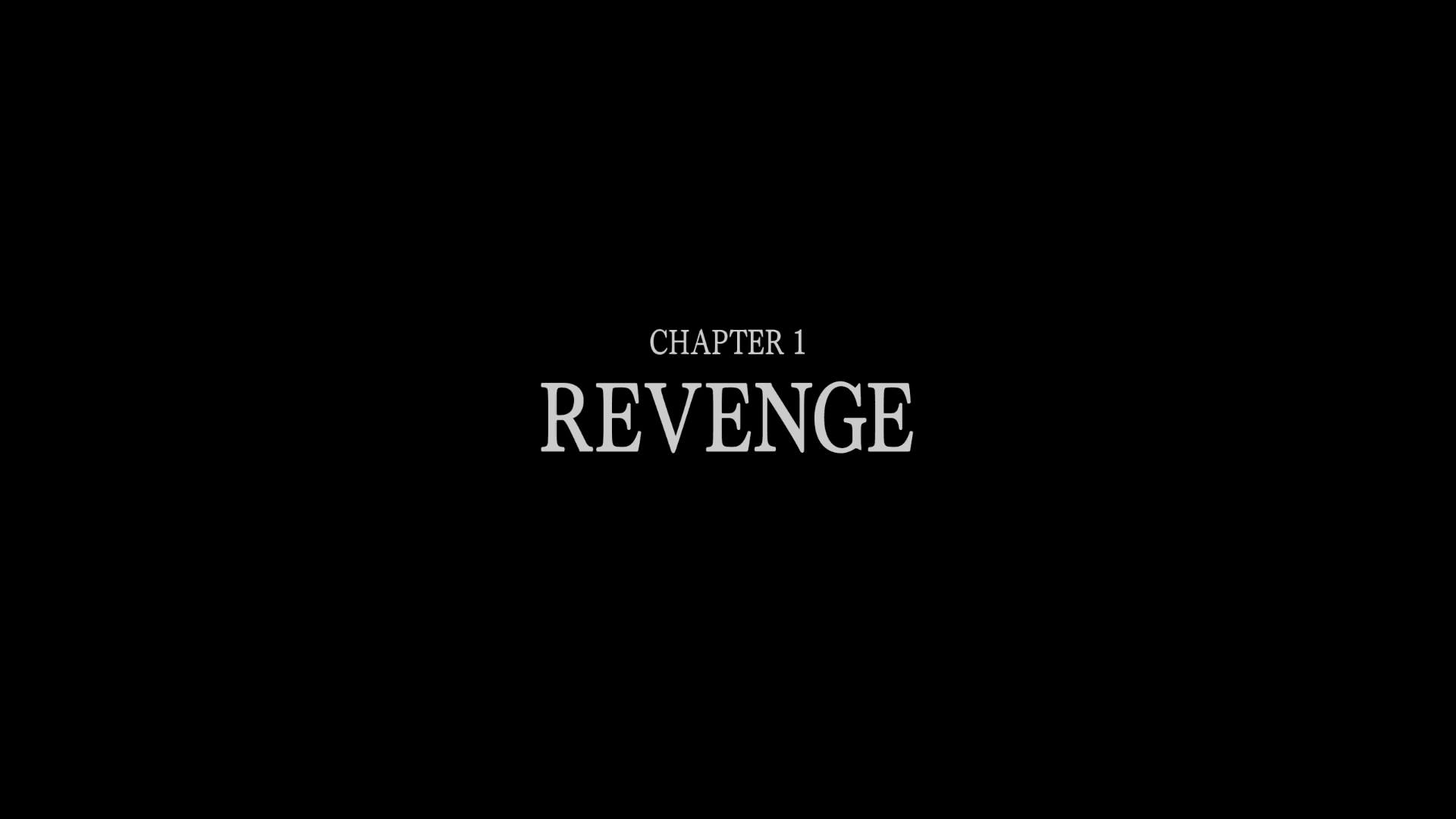 120+ hours later, I can finally put down MGSV: The Phantom Pain. This review might be a bit late to the party, the game being out for a month now and all, but god damn it MGSV was ginormous and there’s so much to talk about. There’s no way this could be anything less than 3 articles.

This one is spoiler free, so if you’re here to find out if it’s worth buying or not, read on.

It’s rare that a game can go on for over 100 hours and not start to severely drag. Every mission has dozens of angles of approach and the emergent “OH SHIT” moments were you just about manage to sneak past a guard or make it out of a fire fight by the skin of your teeth are spine-tingling. Most MGS games leave you spoiled for options, but that’s a gross understatement here. 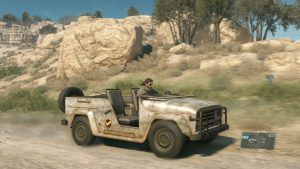 I could be here all week if I were to describe the different ways I found myself getting in and out of enemy outposts, stealing their stuff, sabotaging their equipment, kidnapping their top men and completing my mission.

Suffice to say; it’d be a chronicle and you really do feel like you’re living Big Boss’ legend as he embarks on a quest for revenge á la Captain Ahab, hunting down the rouge strike team who took his life from him 9 years ago in Ground Zeroes, leaving him with a phantom pain of his body and mind…

MGSV is one of the most satisfying games I’ve ever played and the buzz I shared on my first impressions review never died out. Usually in MGS I have moments were I go nuts with lethal weapons, disregarding stealth because there’s more novelty in strapping a guard with C4 and holding down the fort with a machine gun after he blows up. But this one gives you so many options for playing it sneaky that I haven’t even had time to use bullets and bombs. 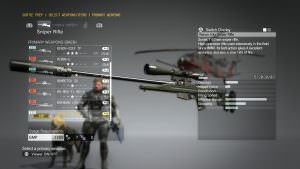 A problem is that it’s easy to find an overpowered loadout and stick to it. Once I developed a silenced non-lethal sniper and had Quiet or D-Dog spot every enemy in an outpost from a safe distance, getting the top rank on each mission got far too easy. It became a crutch for me and took away from the thrill of MacGyver-ing a quick escape together with what rudimentary tools I had on hand.

There are “Subsistence” missions late on that have you repeat previous missions with no weapons, items or support. They’re good at reminding you to be creative and whipping you back into shape.

Those missions, which appear once you beat what turns out to have been a final boss in retrospect, are blatant padding though. Without spoiling anything, there’s a point where it feels like the game is about to really kick off and it just doesn’t. I’d already clocked over 100 hours by then though, so I felt far from ripped off, though I can understand why so many players feel severely let down… Repetitive helicopter rides might be maddening to some, but they never bothered me. Nor did the long treks across the world map as it was always an excuse to raid outposts on my way to the next mission.

The pacing is definitely in player’s hands, but leans more towards slower playthroughs. Infiltrating an outpost initially means cautiously stalking up to a vantage point, using your monocular to tag guards, then slowly making your way inside lest you bump into someone you missed. Assuming you don’t just storm the place with a machine gun.

Later on, particularly when you unlock Quiet and D-Dog as buddies, that process is a whole lot more streamlined and you can literally run straight into a base knowing full well you won’t be spotted. But that’s only if you choose to do so.

Not only is the pacing in your hands, the difficulty curve is too. 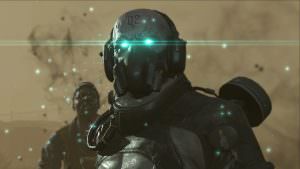 This can result in you hitting a serious spike because you were sticking to one playstyle for too long. The best example is a boss fight with the Skulls which doesn’t accommodate for stealth at all. If you haven’t developed yourself a strong rocket launcher and some armour by then, you’re fucked. I bashed my head against that mission a good 10 times before finally killing them all with brute force. It gave me flashbacks to Deus Ex: Human Revolution, but worse.

The lack of bosses and options against those bosses is surprising. MGS is a series renowned for having consistently amazing boss battles that know how to test players, yet an outpost on alert is more of a challenge than Quiet, the Skulls or the Metal Gear you inevitably fight.

They’re far from bad and they’re MUCH better than the tank battles in Peace Walker, but they feel like endurance tests with little room for sneaky trickery. They just don’t compare to The End or Vamp or Psycho Mantis. This has more to do with bosses themselves just not being as creatively designed as previous ones. In past games, bosses all had tricks of their own that you had to counter; The End used his bird as a spotter, Vamp used knives to pin your shadow to the ground, Psycho Mantis used the god damn controller ports against you. In this, bosses are just too straightforward and tactics that work against guards or tanks work against them.

MGSV’s story becomes much more action-focused for these battles, grasping at a bombastic climax that conflicts with the hours you spent playing it completely sneaky. You can, for instance, start one of these battles with a non-lethal loadout, only to realise it’s impossible to do any to damage them.

Consider this a heads-up. Outside of regular missions, you have Forward Operating Base missions. Similar to Dark Souls, you invade other online player’s bases and ruin their day by robbing them blind.

I never had much time for it. After an hour struggling with Konami’s ever-rubbish servers before landing in someone’s base, getting my shit wrecked in seconds and not knowing how, then being booted out into the menu again, I gave up on it.

That’s fine! I didn’t want your stuff anyway! I’m going back to the Side-Ops!

These FOB missions feel half-baked and, like the latter “half” of the game, don’t fulfil promises Kojima made in the lead up to release. Bases are not as customisable as intended and only replicate your main Mother Base, albeit with guards and traps. I think it would have been better off if it was dropped altogether while the main story or the upcoming MGO expansion was focused on instead. A thievery-based multiplayer game sounds good in theory, but MGSV doesn’t handle it well.

It’s a new type of shoehorned online mode that juts out awkwardly from the main game. It just made me ask “what’s the point?” aloud. 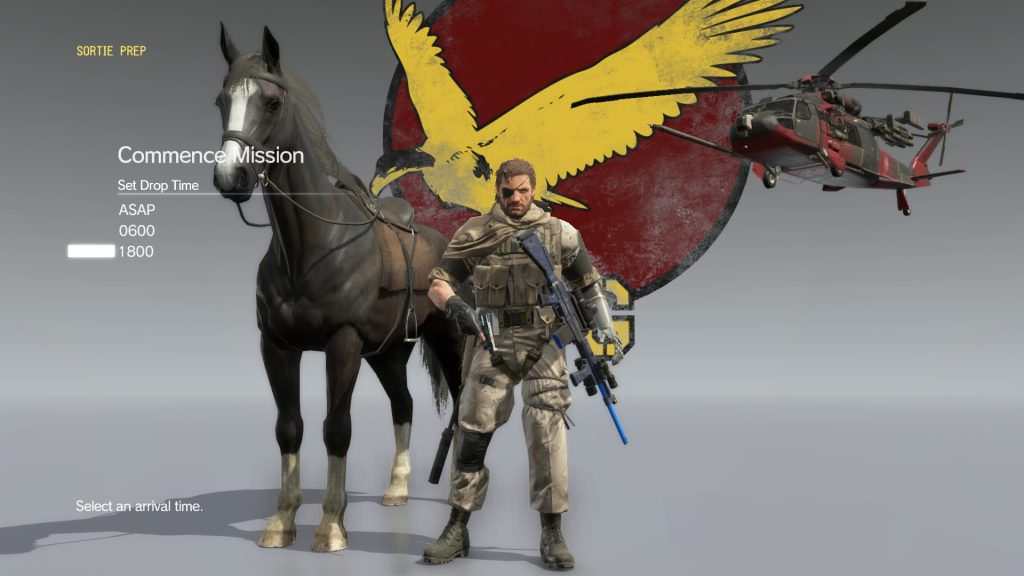 Which is, unfortunately, something I found myself saying all too much in the second “half” of the main game.

Clearly unfinished and populated with partially-realised designs and dangling plot-threads, MGSV fizzles out at the end of its story missions. Peace Walker does too, but you get a clear sense of climax and anything left is unfulfilling busy-work. MGSV doesn’t really have a climax like that.

Or rather, it does, but it happens 15 missions before you think it does, and you’ll be left waiting for a train that isn’t coming.

Generally, sandbox games all have this problem. Skyrim is a great example; you beat “final boss” Alduin then are just left to get bored with all the side missions and uncompleted quests before giving up on it and playing something else.

While I could potentially play MGSV for another 100 hours, I already unlocked what feels like a final cutscene, one that recontextualizes everything I’d been doing for the last month, and it made me want to put the controller down out of a sense of closure. I’ll talk about this in the next article, but the finale doesn’t compare to everything that came before. For a lot of players, it seems to have ruined their fun, but for me it just said “that’ll do pig, that’ll do”. 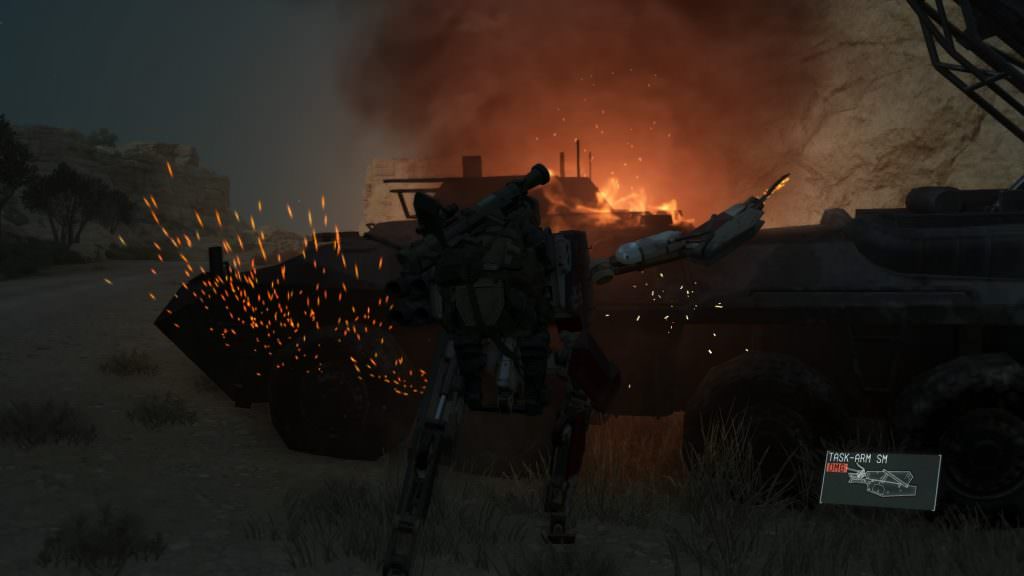 Regardless of its incomplete state, MGSV gave me 120+ hours of absolute glee with relatively minor niggles here and there. It’s staggeringly huge as it is, and god knows how big it would have been if it was finished as Kojima intended. It gets a fully-fledged recommendation from me despite its lacklustre ending.

The sheer replayability is mind-boggling and once you remind yourself to get creative and set your own challenges (for instance, instead of doing the usual tranq gun +sneaking suit + D-Dog loadout, go in shirtless, with only the water pistol, during the day and use the box to get around), the game feels like it’s new again. It’s your changing take on how you think Big Boss would tackle a given mission that keeps it fresh. Is it perfect? No, far from it. Is it the complete package? Definitely not. Should you play it? Yes, absolutely.

Make no mistake, MGSV is still one of the best games I’ve played and there’s more to come in MGO, but don’t expect more than what you’ve seen in trailers and previews. Some promises are unfulfilled, but what’s shown is what you’ll get gameplay-wise.

Hopefully, though it’s likely to be an unfulfilled hope knowing the shit Konami’s game development wing is in, story DLC may be in store for it at a future date and we’ll get the White Whale-sized game Kojima was chasing down.

As it stands, you’ll be missing out if you don’t hop on board now. Just be prepared for the phantom pain it leaves you with at the end…

(In the next article, I’ll be discussing the story and it’s themes in all it’s spoilerific glory. Keep watch.)