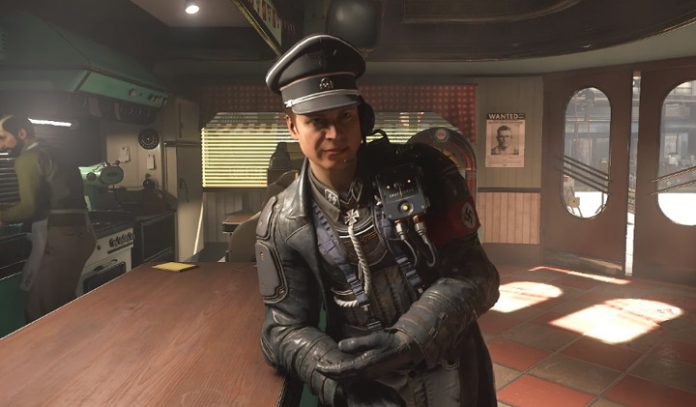 In this trailer, your character B.J. Blazkowicz walks into a small New Mexico diner with a bomb disguised as a fire extinguisher. Soon after, a Nazi Kommandant walks in looking for his favourite American treat, a strawberry milkshake. Things between Blazkowicz and the Nazi officer escalate rapidly after that. Check the trailer out below.

Your assassination of Nazi General Deathshead was a short-lived victory. Despite the setback, the Nazis maintain their stranglehold on the world. You are BJ Blazkowicz, aka “Terror-Billy,” member of the Resistance, scourge of the Nazi empire, and humanity’s last hope for liberty. Only you have the guts, guns, and gumption to return stateside, kill every Nazi in sight, and spark the second American Revolution.

Strap in for a heart-pounding journey as you fight the Nazi war machine on American soil. Blast Nazis to bits with high-tech weaponry such as the Laserkraftwerk, the Dieselkraftwerk, or get up close and personal with advanced pistols, submachine guns, and hatchets. When you need a little more versatility, upgrade and dual-wield your favorite guns! Unleash your inner war hero as you annihilate Nazis in new and hyper-violent ways.

Wolfenstein II The New Colossus releases on PS4, PC, and Xbox One on the 27th of October 2017.