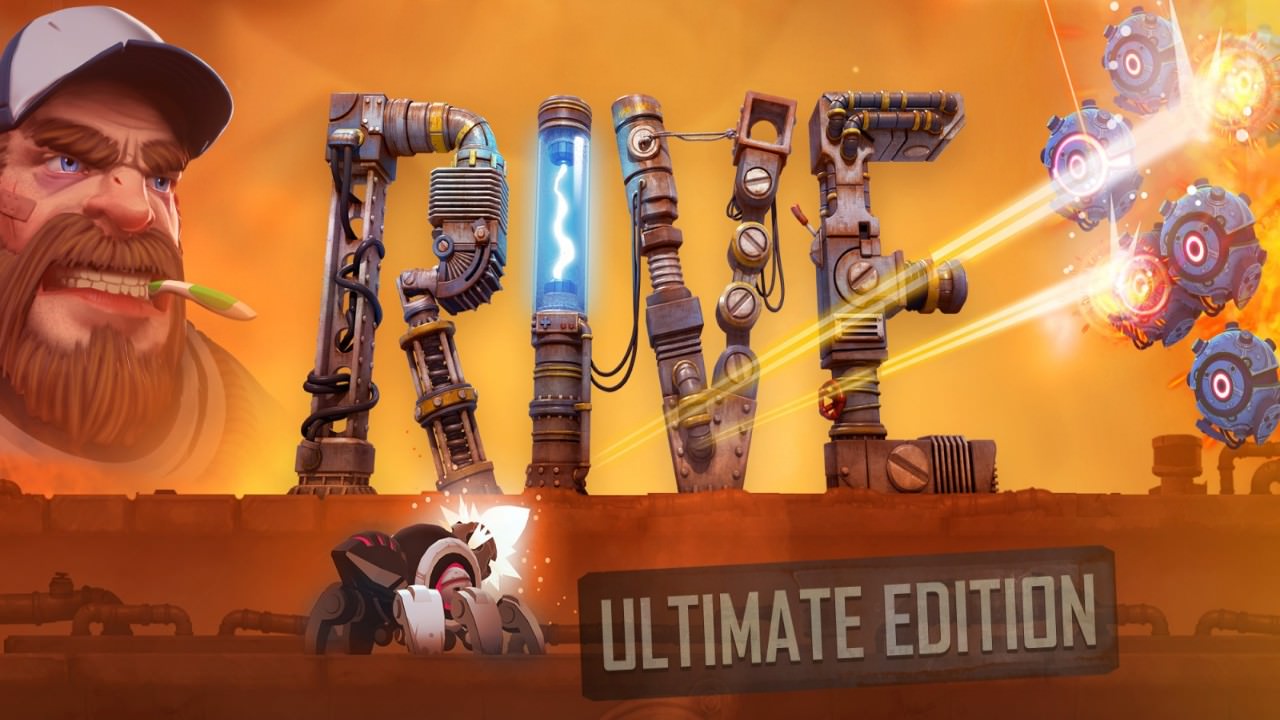 Rive: Ultimate Edition builds on the twin stick shooters genre reputation of being absolutely chaotic, challenging and just fun! You play the role of a space explorer/miner called Roughshot who pilots a hybrid spaceship/spider thing called a ‘Walker’. I don’t normally touch on specifics in reviews, however the opening level of the game just sets the tone and really made this reader grin.

Flying through an asteroid field, Roughshot says “Let’s deal with these rocks in style, let’s put on some classic gaming music”

What follows for this writer is the purest form of arcade gaming Euphoria. An amazing bit-style soundtrack starts blazing, asteroids are floating towards you from every direction and rockets are flying all over the screen. I have to say I haven’t been that impressed by an opening scene since Halo 5. 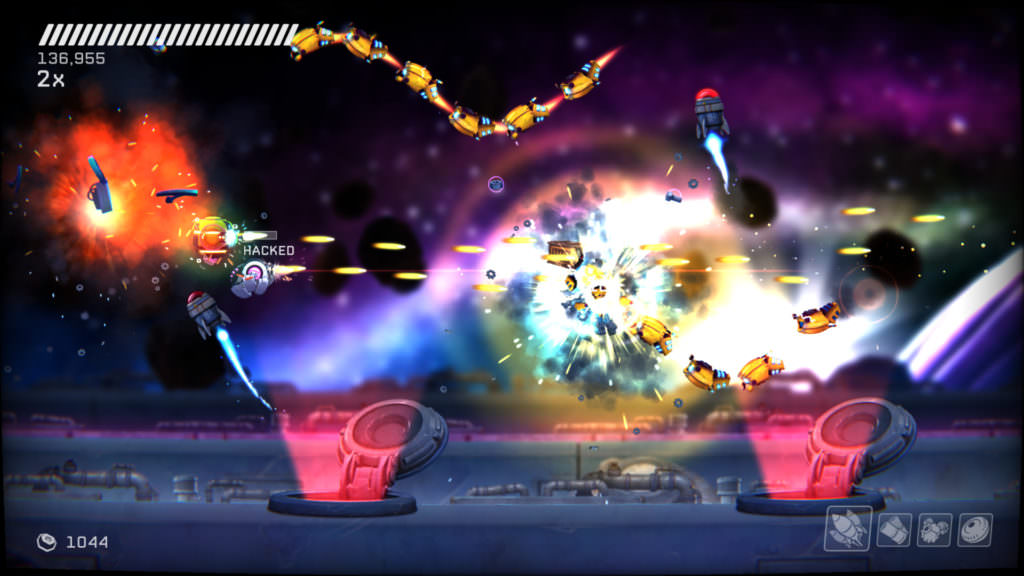 This is the Rhythm of the Rive (Yes, we do Corona puns)

Rive is a twin stick arcade shooter with a loose story driven by exploration of what looks like an ancient alien fuel refinery. However: this place filled with interesting tech is also filled with an overwhelming number of hostile A.I. and robots. The controls are quite simple:

It can take a little bit of time to get used to the overall control scheme if your not familiar with twin stick shooters. However this take a few mins and your good to go. The thing is with Rive is that it’s a title that pushes you to be flash and fast with movements and attacks. Much like the Bleed series, Rive doesn’t really give you an opportunity to take your time. If you’re a Dragon Ball fan you’ll understand the term “Ultra Instinct”; that really sums it all up. It’s all about instinctive movement instead of taking time to make a decision.

To put that into perspective: At one point early on in the mission based story mode you find a fuel tank which then explodes and leaks into lava destroying it. Robot and what is known as “A Sky Whale” barrage you with attacks, missiles and smouldering asteroids. It’s all about practicing and getting to know the Rhythm of Rive, which I couldn’t think of a suitable off timing for. It’s that mental. You will die In Rive and you’ll die a lot, but the game doesn’t punish the player for this which lets players carry on trying to hone dem skillz.

A cool ability is to hack into turrets, health bots, door mechanisms etc to unlock new areas or give you that backup for the next onslaught of mental metal. A couple of stand out features that this writer really enjoyed is the use of HD force feedback in this Switch version. A player will really feel those waves of robots punch, as well as feeling every key hit Roughshot makes whilst typing away. Also, the menu system is very reminiscent of the green screen “Pip Boy” displays from Bethesda‘s “Fallout“ series.

Other cool features include gravity orbs that you can fly around in, incredibly well thought out map design and Well placed ammo/health drops. This is all contained in the campaign mode that can be played via online co-op. Other modes of play include: 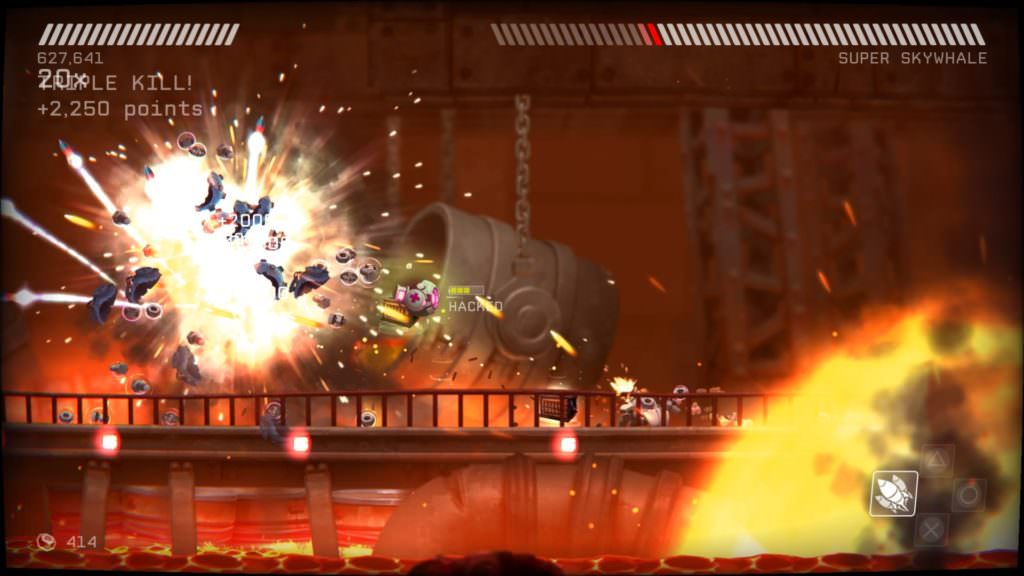 The textures, background and level design is clear, crisp and not over complicated. Rive understands how crazy it is, there for the part cell shaded style fits well with maintaining a constant smooth frame-rate and making sure you understand what the hell is going on. The frame rate is constantly smooth even when multiple enemies and explosions are on screen.

The SFX in game blend beautifully into the game world. One thing I have noticed recently about indie titles is when SFX are not designed and applied in context with the source material. In Rive: UE, everything blends together yet ‘pops’ at the same time. You can see every bullet, trail and explosion but players will still understand everything that’s happening. It’s a brilliant accomplishment.

As I said during the introduction, Rive has an absolutely amazing chiptune arcade/sidescrolling theme throughout during action sequences. There are also ethereal silences to contrast with just atmospheric sound.

Sound FX-wise, the spiders booster rockets, all weapon shots, explosions, splat, flanks and everything else is well timed and makes you feel the environment. This, married with the aforementioned HD rumble is very immersive

Rive: Ultimate Edition is a prime example of how challenging, fun, immersive and content packed a twin stick shooter can be. This feels like a comprehensive AAA release rather than an indie title. I would recommend this for anyone looking for something fun, chaotic and mental at the same time.

Thanks very much Limit Break!