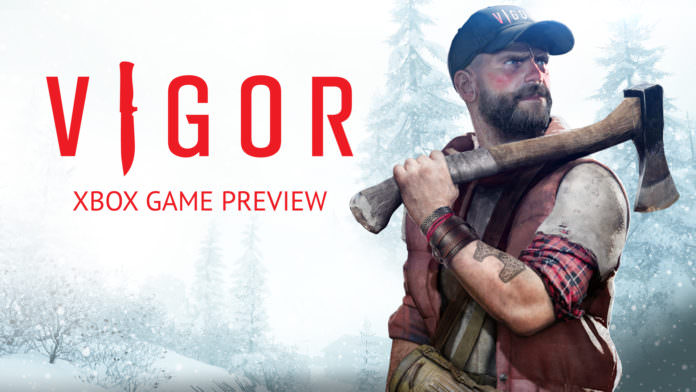 The Battle Royale trend has arisen, has seen its plateau and is, to some extent, already somewhat in remission. And despite all of this, many gamers still thrall to games such as PLAYERUNKNOWN’S BATTLEGROUNDS and Fortnite. The same tension, albeit in slightly varying jackets.

Bohemia Interactive is now also making an attempt at the same success. Yes indeed, the makers of the Arma games – where the well-known PUBG, in turn, found its origin. How does the new venture from the developer fare against similar games? We played the Vigor Xbox Game Preview and here’s what we thought.

To be honest, to immediately dismiss Vigor as “just another Battle Royale” is, of course, a bit too short. Bohemia’s new title can be seen more as a kind of permadeath survival shooter, which features some Battle Royale-like game elements.

As a lone survivor in a post-apocalyptic Norway, it is up to you to keep yourself going. Both in gunfights in the public areas as well as in your humble base. Confrontations only exist in the open zones (by means of matchmaking), however, it is entirely possible to avoid player contact if you are careful. In terms of loot, everything you scavenge in these areas can be taken back to your base for crafting and progression.

I don’t have an issue with the “Coming Soon” messages in the crafting area, this is common for a preview game and shows that the developers are working on something great. What I have encountered are unstable frame rates, uncomfortable gunplay and mostly defective network code meaning that virtually no confrontation is a fun activity. Obviously, this has yet to be polished and expanded and I see great things for this game once its issues have been resolved.

In short flashes like the early Game Preview events, Vigor shines, however, it is hard to see how Bohemia Interactive can provide a new game update with more fat. Here and there, some interesting micromanagement takes place throughout your shelter, but at the same time the supply of materials, blueprints and (dare I say it) loot boxes feels especially scanty.

However, there are many possibilities for Vigor. Build your own survival camp, tinker with the weapons you discover, and finally utilise everything you scavenge to your advantage as you head out to find more loot. This gives us a very nice variation on the average survival shooter.

Sounds kek, but of course there is also a twist; the permadeath. If you manage to escape with some fantastic loot from your fellow Norwegians, that is a nice bonus. However, if you are unfortunate enough to run into another player while you are unprepared, the adventure will stop there for you. This is where the Battle Royale element comes in to play, but this time with a longer compelling turn.

Vigor immediately gives players a unique experience, but the learning curve to its style will take some time. It’s worth noting that the game will be rolled out during playable, early stages. At the time of writing, the rollout feels perhaps a little too early. While the game is a lot of fun, there are a lot of elements that make certain matches unplayable even on the tightly-equipped Xbox One X.

Similar to the PLAYERUNKNOWN’S BATTLEGROUNDS Xbox Game Preview, Vigor is another case of rushed production. Jerky steering, lots of rough bugs and, especially in the case of Vigor, a lot of functionalities that are completely missing.

If you have a thing for Battle Royale games or the more immersive survival shooter, then Vigor is probably going to interest you. In a year. Although the Xbox Game Preview version of the game immediately make clear what makes Vigor so special, it also underlines at the same time that this game is not yet in a stable state and will come with a certain amount of issues (as all early-release games do).

Keep an eye out on Vigor to see where it progresses or play a Game Preview weekend. If early games are your forté, then it might be worth picking up but I would personally wait until a more stable version rolls out before I dedicate more of my time to the game. This is a very interesting adaptation on the average survival shooter and has a lot of potential, but right now it causes more frustration than the enjoyment it brings.