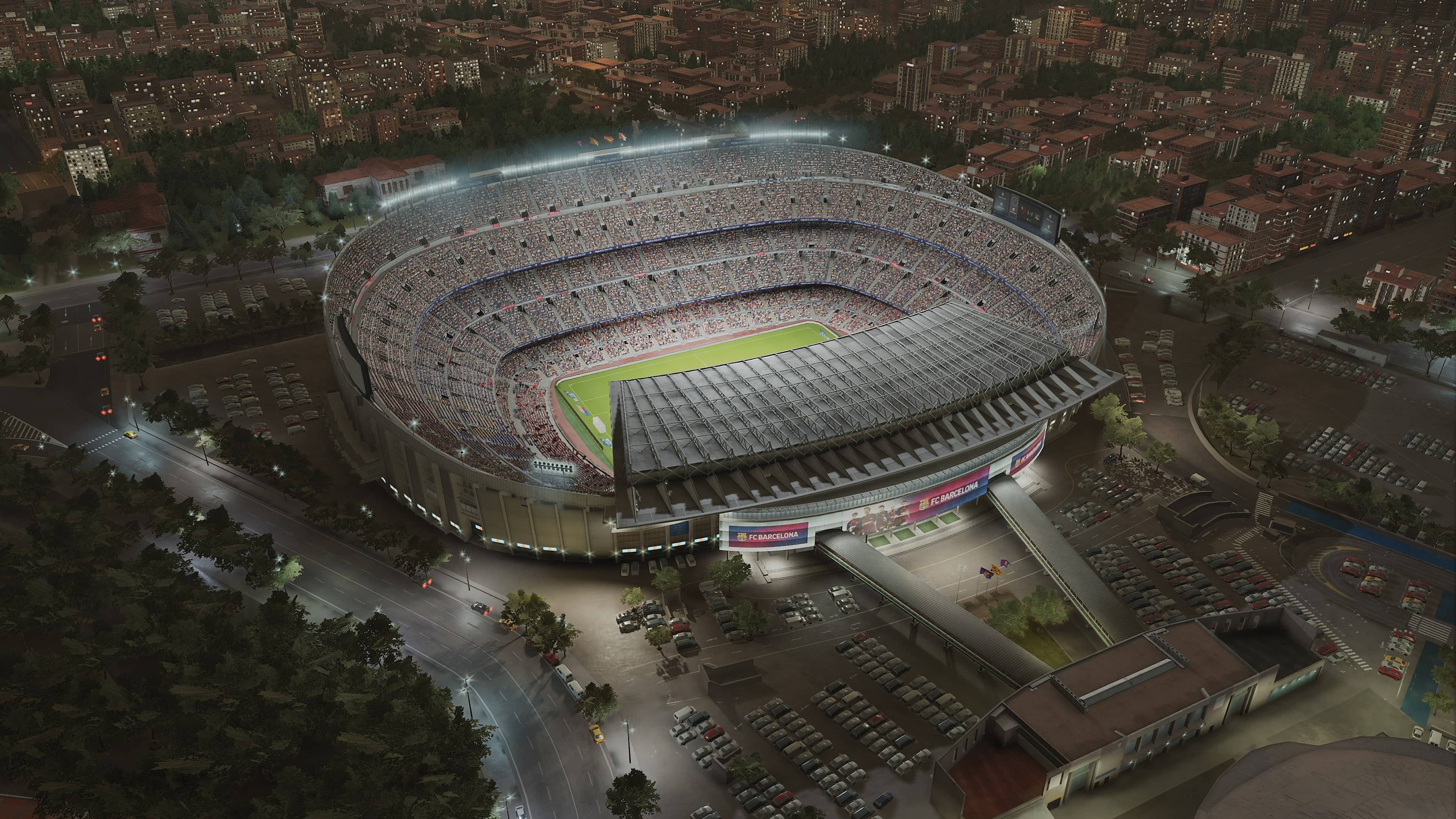 The general public has had a day or two with Konami’s latest kickball offering and with their esteemed collective opinion rolling in, we thought we’d share some thoughts of our own. But first, let’s talk about the contents of Pro Evolution Soccer 2019‘s demo.

Konami are giving players a dozen teams to choose from. Ten clubs plus France and Argentina national teams are available but (mostly) with May’s kits and line-ups. Players can play 5 minute matches and all starting difficulty levels are playable*. Matches in the European demo are all played in the Nou Camp or Schalke’s Veltins-Arena.

Potential buyers also have a chance to play online. This will give those flirting with Pro Evolution Soccer 2019 a chance to check out the competition early doors.

*Legend is not available.

Pineapple-headed Nottingham Forest legend, Jason Lee must have helped with the motion-capture as some of the miskicks, miscues and mishaps are realistically animated

Without a couch buddy on-hand to sample the engine, I decided that ‘Top Player’ friendlies with the lowest-rated teams in the demo would suffice as some demo research/Master League training.

The first thing I noticed was HDR – not a bad sign. Pro Ev 2018‘s X/Pro enhancements were bumps to rendering and display resolutions without any love for colour. However, the deep blacks, rich colours and blooming sunshine of HDR are definitely well-used in this build. The Pro Evolution Soccer 2019 demo looks nothing short of sensational.

Animations are a little more consistent than in PES 2018. There is less ‘skating’ and fewer over-rotated ankles to sully your replays. Goalkeepers sometimes floated motionless to the ground in older Evs, giving them a ‘dummy’ look. This has, thankfully, not been seen in the Pro Evolution Soccer 2019 demo so far.

The AI did a good job of closing passing lanes and my usual game of ‘endless 1-2s’ wasn’t all that successful. On my usual ‘Level 1’* passing assist, passes could be overhit or easily go askew when the tempo was high. The game engine tries to reward the deliberate when it comes to passing. Taking a touch away from the grappling defender or trapping the ball with RT(R2) will give you more time/space/control to accurately play a pass.

*Why would you buy Pro Ev and play on Level 2 or Level 3?

Is it too much to ask to once again suffer 90 minutes of direct, violent football at the hands of a fake Sam Allardyce??

Missing In Front of Goal

Shooting too has a little more depth. The demanding mechanics have usually drawn praise throughout the series’ run. Having an angle and planting the feet have long been essential in scoring in Pro Ev. But in Pro Evolution Soccer 2019, the penalty for being a little off-balance or not being at a great angle is huge.

There is room not just to err but to be embarrassed in front of goal. Goal-shy Nottingham Forest legend, Jason Lee must have helped with the motion-capture as some of the miskicks, miscues and mishaps are impressively realistic. The pineapple-headed trier would have been proud of any of my lowlights in front of goal.

Versus AI – Preparing for Master League

The AI on Top Player doesn’t have much in the way of a ‘Plan B’ in the PES 2019 demo. This is disappointing as the variety in AI strategy was a former strongpoint of the series; Ireland played the long-ball, Barcelona played actual football etc.. The twelve teams in the demo all play possession football and apply moderate pressure. When human players are a goal down, the ball is always impossible to retrieve. When a goal up, the gegenpress is always insane. The lack of tactical nous from the AI left me praying for the return of Team and Player ID.

Is it too much to ask to once again suffer 90 minutes of direct, violent football at the hands of a fake Sam Allardyce??

While 1v1 casual matches are the only online mode available in the demo, the difference in responsiveness between an offline and online game has shrank

Online Mode? In a Demo?

That is correct and your surprise is unsurprising. Online demos in sports games are not common but it’s easy to see why Konami are more than willing to show off any improvements to their servers.

PES 2018 suffered a baseline lag in its online modes that hovered between ‘noticeable’ and ‘annoying’. The sharp responses and first-time play that underwrite the PES experience are usually curtailed by this tiny delay.

Co-op modes like 3v3 MyClub and 3v3 League even had a little extra lag as if your team needed something extra to fight over. First-time passing, in particular, was made very difficult by the added delay.

Our Pro Evolution Soccer 2019 online demo is promising so far. While only straight 1v1 casual matches are available in the demo, the difference in responsiveness between an offline and online game has shrank. There was some throttling and occasional frame-skips but not much more than is present in most PES demos (and these have always been offline till now, remember?).

Some of the sharper online play may be due to the popularity of the demo. i.e I have more matchmaking options in my region.

While having the vision, composure and technical ability to perform such a finish is not uncommon at the highest level, I started to question the system when N’Golo Kante managed two sublime chipped goals in successive games against me

3v3 mode was available in League, MyClub and Quick Match in last year’s Ev and we are given a chance to try couch co-op with bots or single-player with bots.

I won’t lie. It is just a game of 3v3 Quick Match but running in PES 2019. The major difference being sharper play and quicker responses. However, I only played with bots so 3v3 could still be the laggiest mode again this year. We shall have to wait and see.

Needs a Touch of Nerf

2018 was declared ‘Year of the Absent Full Back’ by Konami. Dishevelled and malnourished centre-halves frequently had zero stamina by the 15-minute mark of every game as they had to chase every speculative switch or wide overlap. I don’t remember a single thirty-second passage of play where there wasn’t at least one 3v1 overload out wide.

The classic ‘1-2, chipped through-ball’ combo was another of PES 2018‘s weaknesses.

The 2019 demo has tethered the full-backs to your goal-line but the chipped-through pass is still a little cheesable. Through-the-centre chips should be highly contextual and relatively difficult to execute but I feel like randomly trying LB+Y (L1+Triangle) pays off a little too often here; even with Level 1 passing assist.

The AI is unerring when it comes to chipped shots also. Every single occasion on which I held ‘Y’ (Triangle) to bring out the keeper, the AI would score a highlight-reel chip.

While having the vision, composure and technical ability to perform such a finish is not uncommon at the highest level, I started to question the system when N’Golo Kante managed two sublime chipped goals in successive games against me.

There are some in-game tweaks and additions that add to the experience. Goalkeepers can take a step when an opposition player strikes a free kick. When this is done right, the keeper greatly increases his chances to comfortably catch the effort. Of course, there is always chance he will take a step in the wrong direction and end up wrong-footed. 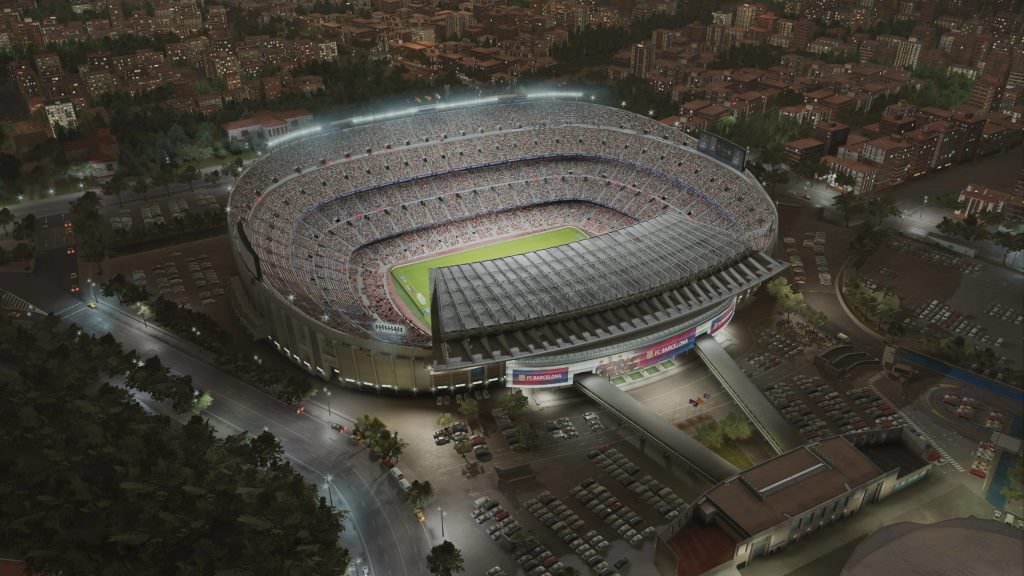 Changing quick tactics will now show you which tactic you have selected. A minute change but very welcome.

Pro Evolution Soccer 2019 demo is available NOW on Steam, PS4 and Xbox One with the game proper releasing 30th August 2018