‘Toys to Life’ became a dirty word quite quickly; the FMV-game of the 2010s if you are old enough to remember the CD-ROM boom. Skylanders and Amiibo-enabled titles had a brief tenure as the ‘future of interactive entertainment’ and died from a fatal deficiency of interactivity. Sound familiar? Starlink: Battle for Atlas is attempting to revive what they feel is still a good idea by addressing this TtL-killer head-on. 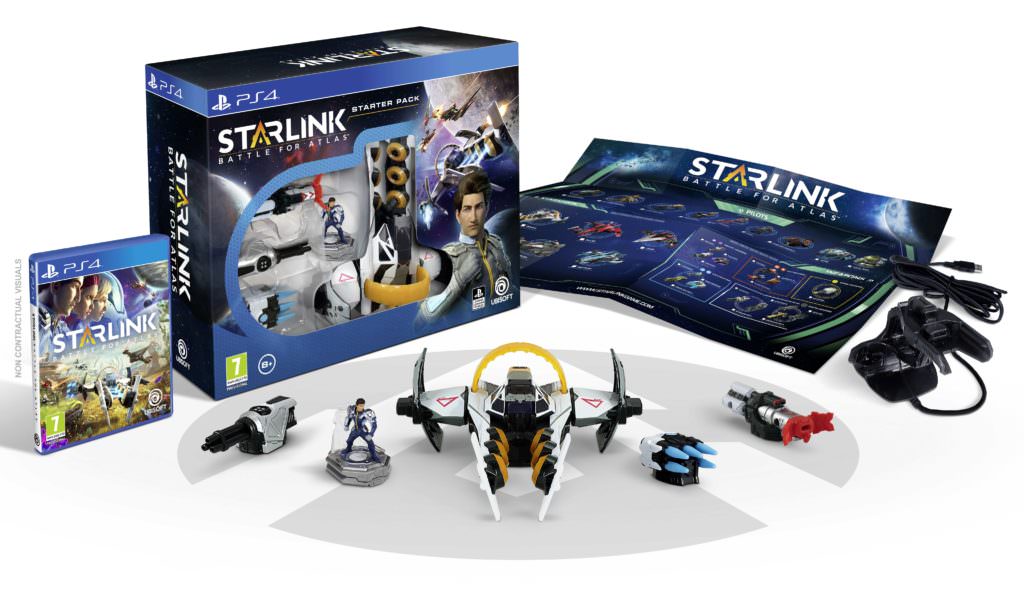 Actual Toys to Play With

Early on in our briefing, journalists were shown how the ships came to be. The story of how the final models were designed as physical models via 3D printing and then designed from there as production units is interesting. From the ground up, the experience rests on objects that should be worthwhile to hold and manipulate.

The modular system and articulating details were similarly there from the beginning and this writer feels these crucial aspects will help sell the Starlink series over a longer run. The toys are interesting to play with and look at – they aren’t staid tokens to unlock items in-game. The entirely interchangeable chassis, wings, pilot and weapons mean a player can build a ship that looks cool in real-life and then see how it plays in the game by placing it on its mount and hitting outer-space.

Starlink: Battle for Atlas senses whichever set-up a player is using atop their controller mount and it’s all hot-swappable so the relationship between the physical act of playing with the toys and the game is not lost. A player can be lazy and swap between certain items in-game without swapping out but it mostly rests on the DIY premise. 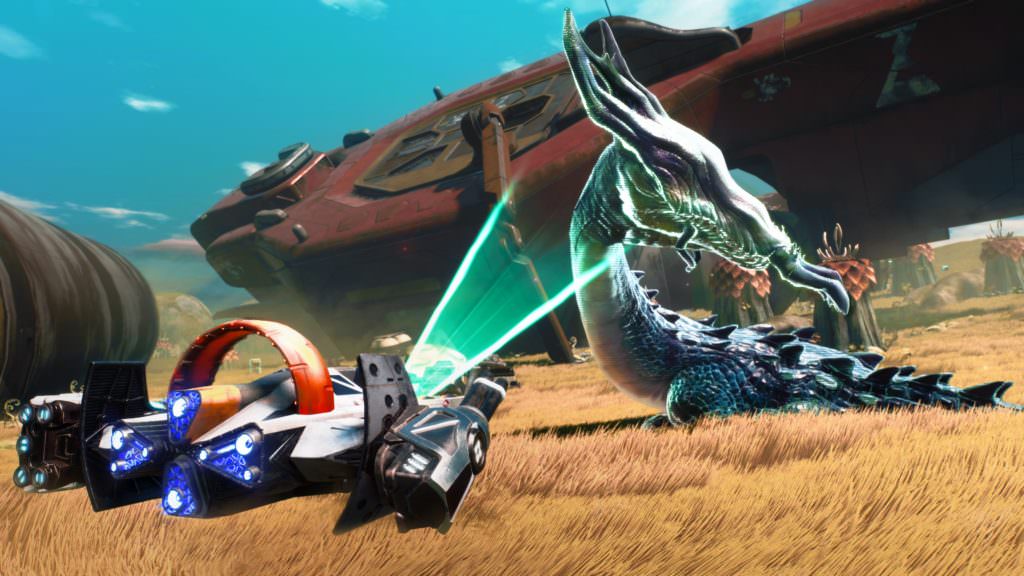 A streamlined cross between a space-shooter and the original vision of No Man’s Sky, Starlink BfA is a surprisingly deep game for one aimed at a younger market. Planet-bound play rewards exploration with resources, small battles for XP and some micro-missions to lend some guidance and purpose to the open worlds. Players can fly seamlessly from surface to space. Watching (insert planet’s atmospheric colour here) fade into the infinite black of space as we cross the Kármán Line is a feast for the eyes, even on the modest Switch.

Elemental combat is simple to understand but can be tough without a little thought and dexterity. Elemental combos are based on intuitive knowledge of nature. Fire + Vortex = Fire Vortex; a tornado of fire etc.. The strengths and weakness of each foe react differently to different combos so the game actively encourages players to mix’n’match. On land the combo system is more useful with more frequent need for changes to loadout; probably a concession to the easier terrestrial combat.

A neat mechanic is the checkpoint/respawn system – should a player have a second spacecraft on hand as they lose their ship they can swap out and continue from that spot. This only saves a player a minute or two so it’s not unbalanced; players won’t feel forced to buy a second ship. The action is actually interesting to perform and utilise rather than a means of ‘buying’ progress. Bravo, Ubisoft.

Pulling a player through space is the easily digestible story of a superweapon, long-dormant and the crazed space-pirate who kidnaps somebody who might be able to help reactivate it.

Starlink: Battle of Atlas avoids complicating matters too much in a game where players might spend days at a time away from the main questline. Older players might be turned off by the black & white tale but as a game to explore and play with, the story works to spread a player across its vast galaxies. Starlink: BfA is conscious that its variety of worlds and enemies sometimes needs to be introduced to the players throughout its run and there are some heavily scripted sections despite its pretensions of freedom.

A Link to the Past

Ubisoft has a strangely close relationship with Nintendo. Ubi have borrowed some licenses from the famously-insular Japanese company that other companies could only dream of. 2018’s biggest coup is finding Fox McCloud and the Arwing from Starwing/Starfox on the Switch version of Starlink: Battle for Atlas. 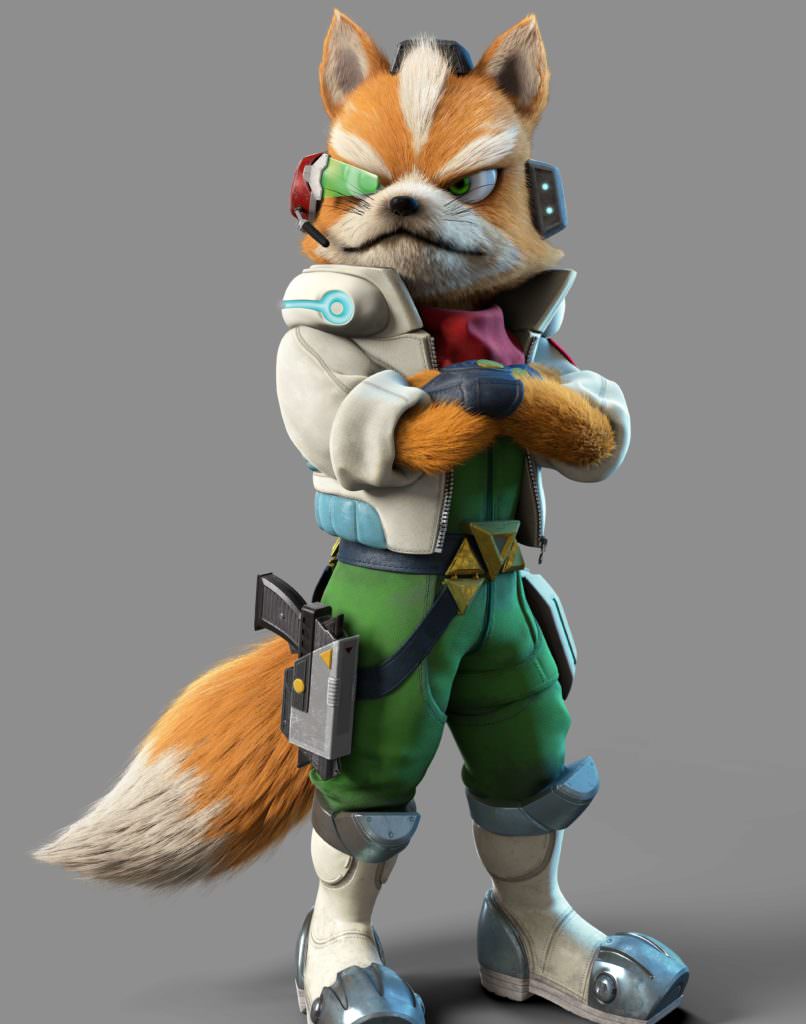 The Arwing and Fox get no special treatment. Fox can shunted into any ship and the Arwing can be stripped and refitted, you can use the Arwing’s parts on other ships. It’s mind-blowing what Nintendo are allowing Ubisoft to do with their IP.

Starlink: Battle for Atlas release for Nintendo Switch, PlayStation 4 and Xbox One on the 16th October 2018 with starter packs from around £69.99/€79.99/$79.99 with extra ships and parts sold separately