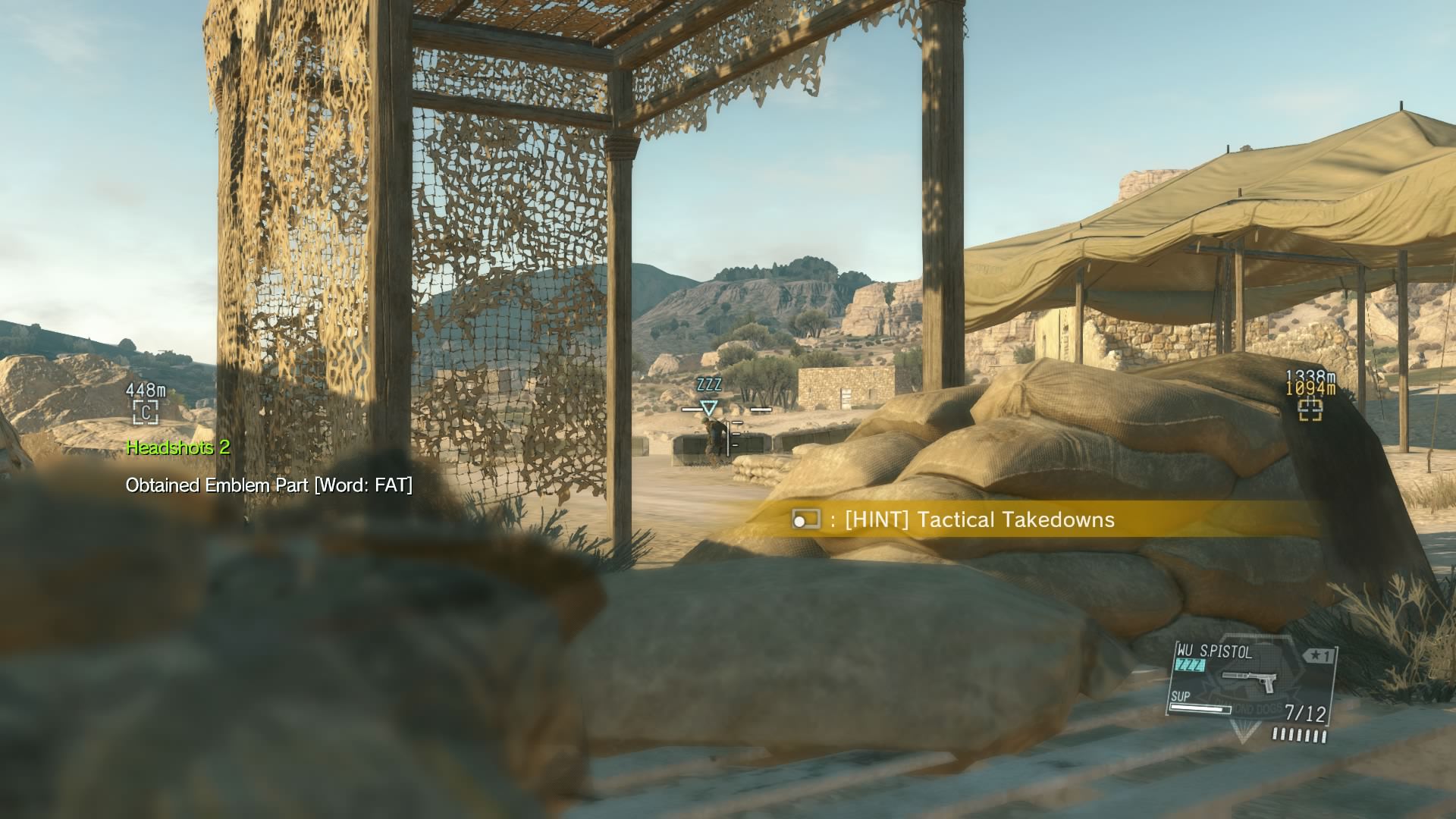 Behind enemy lines in Soviet-occupied Afghanistan, I repeatedly battered my head against one particular walled outpost.

My mission: find and exfiltrate with a prisoner. There were minutes to go before sunrise so the fleeting cover of darkness could only get me inside the fort. What to do with the myriad of guards inside that I couldn’t see from my vantage point on the rocks was a serious issue. With no tolerance for being spotted, this had to go clean and bloodless. Problem; the silencer on my tranquillizer gun would wear down long before I could put down everyone inside, and it would be neigh-on impossible to find an opening in their patrols.

Unable to cover all my bases, and not entirely sure how many guards there might be inside, I opted to go in and play it by year. At least, I thought, I might be able to rush anybody inside the cramped rooms and punch them out before they raised the alarm.

So it went; I managed to slip past any guards I hadn’t knocked out, and the ones that were put to sleep didn’t have anybody watching them to wake them up. For the most part, despite some very close calls and my suppressor wearing out, it went off smoothly until I got inside. Two guards indoors that I hadn’t seen earlier spotted me and were one exhale away from shouting for backup, only to be met with a running punch to the jaw and a lightning-fast CQC combo respectively. Safe, thank god. But in the time it took to find my target, guards began to wake up with the rising sun.

Just as I got to his holding cell, the whole base was alive again, well aware that there was an intruder inside. I decided to wait out the sweep inside a cardboard box in the cell, but worst of all, two guards returned to their post just outside the door I came in. With no other exit, I was trapped.

Then, the gods of war looked down on me.

Taking my golden window of 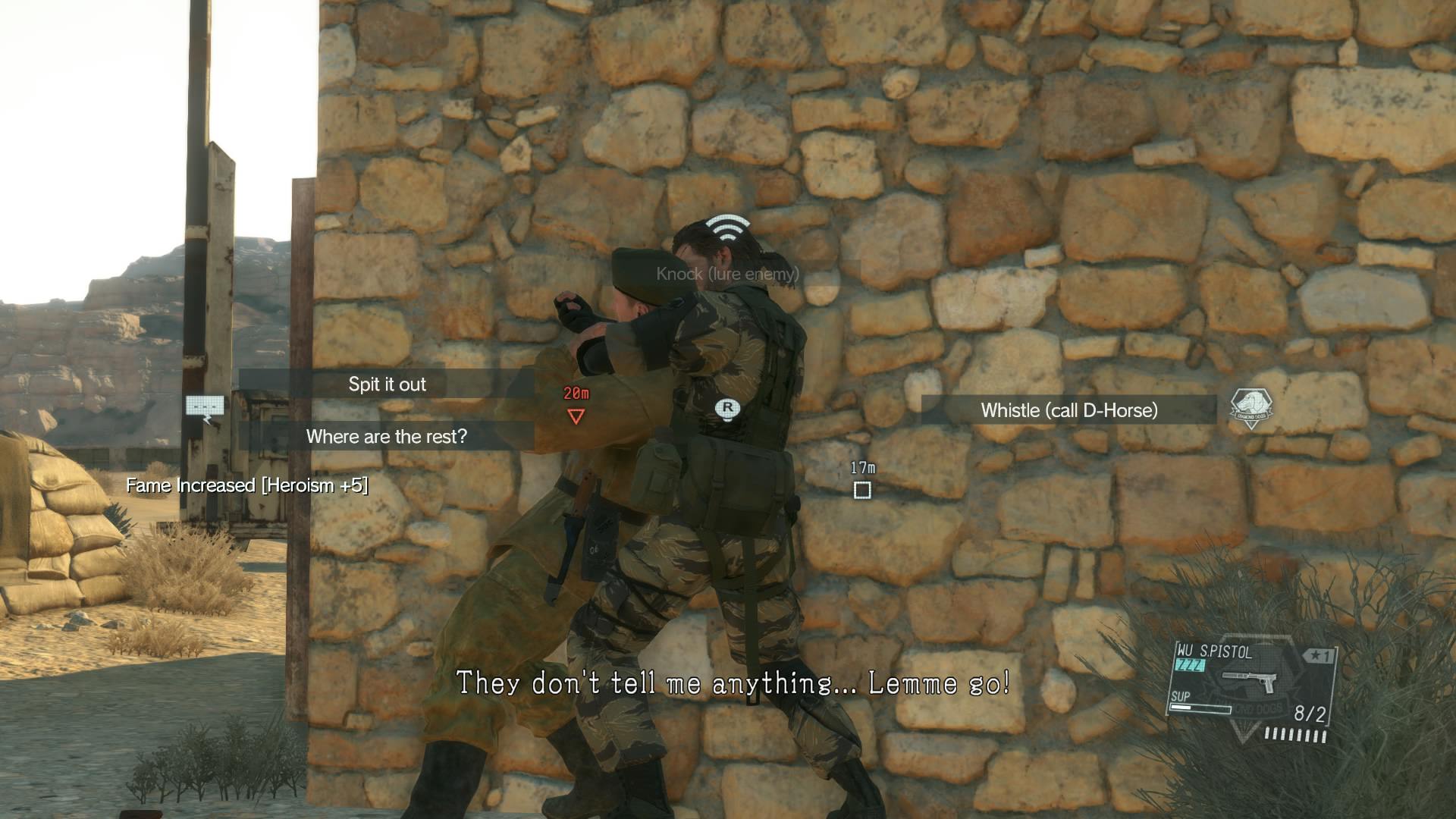 opportunity, I needed to distract the guards. I popped out of my box, threw an empty magazine to the opposite corner of the room to lure the guards to it’s sound. If they both checked, I’d be able to take them out with two swift throws.

But they didn’t! One stayed by the door, looking in, while the other went in to investigate. Shit, no chance to take them both out cleanly.

Then when the guy checking the sound turned around, he noticed a suspicious box. The one I was in. Double shit! This never happened before!

I waited, praying to those same war gods that he wouldn’t try to open it. He did. Triple shit!!!

So I gave up my hopes of pulling this off cleanly and resolved to jump out, give him a 5-hit combo to the mush just as he tried to pick up my box, do the same to his friend and just leg it out of there before the whole base descended on my cycloptic ass.

And I did…..but his friend didn’t notice. He’d turned around when I wasn’t looking! The noise of the sandstorm, now in full blast, must have masked the sound of me beating the crap out of his friend. YES!

I gave him the same treatment, picked up the prisoner, and got out of there like a hot snot. Whistling for my horse, we vanished into the mountains with the storm without a single enemy spotting us. Once it was cleared, I sent him up up and away in a beautiful balloon, got paid handsomely, and none of the guards knew what hit them, just that it hurt.

That is just one of many ways to complete a single side-mission in MGSV: The Phantom Pain. I have been playing for about 40 hours now, nowhere near the end of the story missions or the completion of constructing Mother Base to it’s fullest. And boy, is it something else to behold. 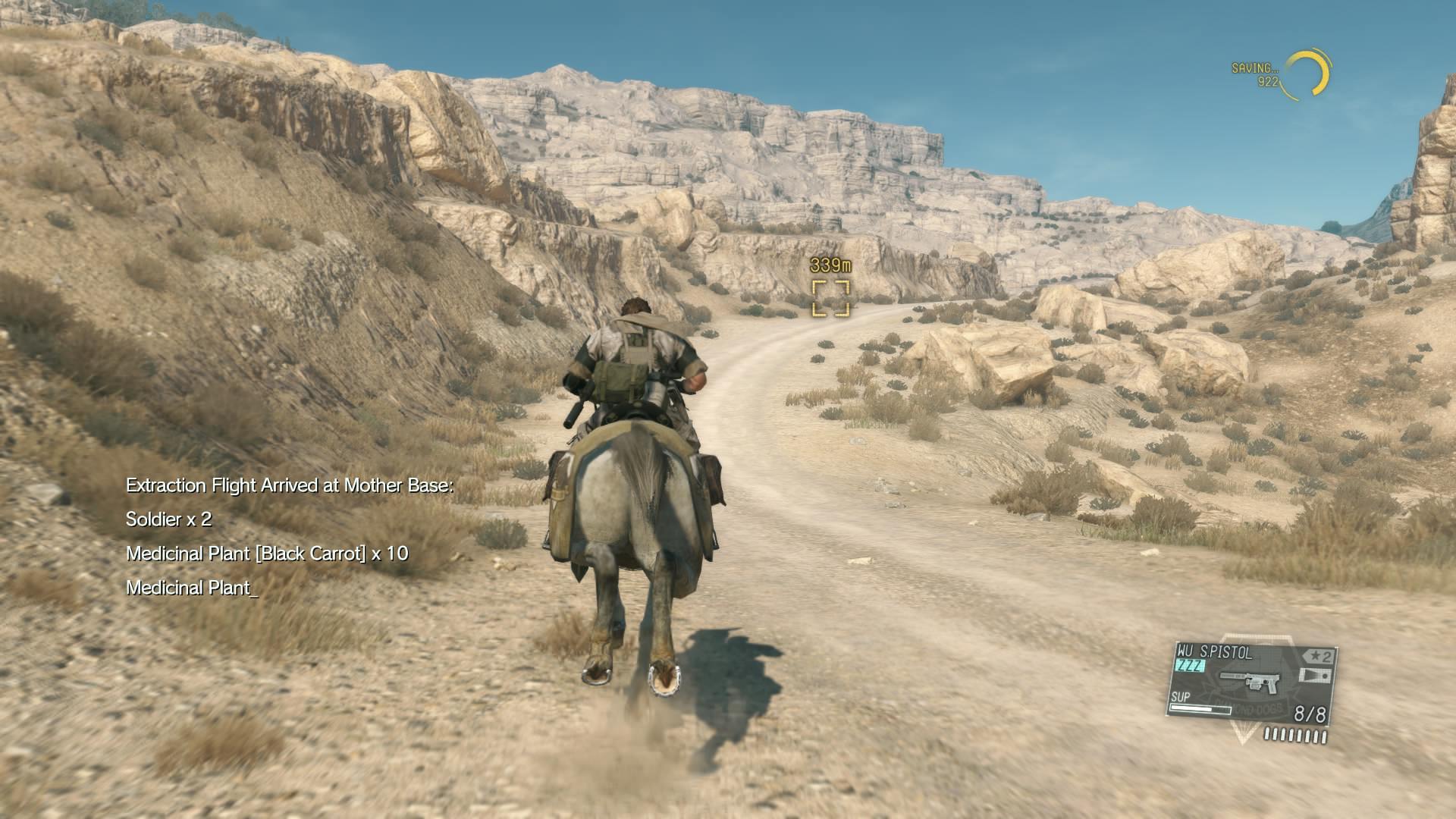 The kind of emergent gameplay that happens spontaneously feels like MGSV is going to be infinitely replayable. While Grand Theft Auto will leave you chuckling at the slapstick Rube Goldberg machine that can pop up during sessions, Phantom Pain makes you clench your ass, hold your breath, then make you audibly cheer when you manage to sneak past by a hair thanks to something you didn’t see coming.

It’s insanely thrilling if you’re a stealth addict, and manages (so far) to right so many wrongs of previous games. First and foremost; the guards level up too. The addition of an enemy with a helmet and bulletproof vest can be a complete nightmare. As can soldiers with night-vision goggles or snipers, or walker mechs that have shields on the front. Likewise, the downgrading of the tranquillizer gun allowing it a very limited supply of ammo, a limited range and quickly degrading silencers makes it as unreliable as it should have been in 3 and 4, adding a hardcore layer of challenge.

Throughout, you’re called to be smart, patient and creative about how you tackle missions if you want a decent rank. Changing geographies and enemies mean there is no single tactic you can stick to for long. But even if you could, it’s so much more involving than before due to many-angled level design and a fluid movement system to match.

Remember that one optional cabin in MGS3? Well, the entire game is made out of those. Each fort, town, ruin, barrack and base is designed with the player in mind, rather than the location being laid down first and players working around it. Add a dynamic weather, light and NPC AI system to that, and you have a game that will never stop keeping you on your toes.

I play with Reflex Mode (a mechanic that slows down time when a guard spots you so you can silence him at the last second) off, because I’m a badass, so I’m having a very unforgiving experience. Just how I like it. My worry is, as I develop new weapons back at Mother Base, that I’ll eventually become overpowered like I did in Peace Walker. It has yet to happen, but I can already see a tranq gun with unlimited suppressors on my menu… 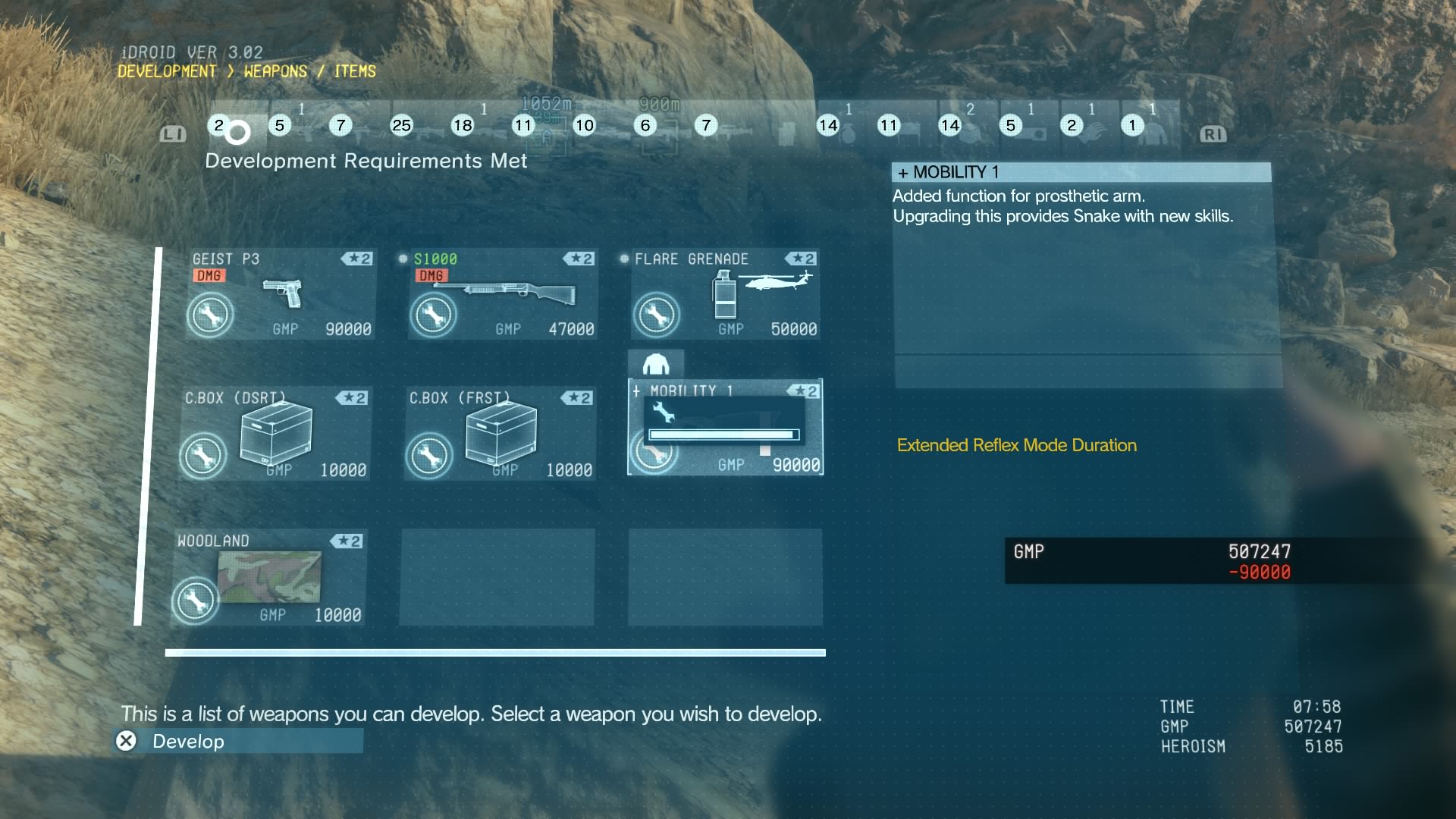 Speaking of menus, Phantom Pain has it’s niggles and menus are one of them. MGS3 had a bloated menu system that had you changing camouflage far too often. But while 3’s menus at least paused the game, Phantom Pain’s don’t. How they’re laid out is unintuitive and can leave you fumbling to find the stop button on your cassette player in time to hear an approaching enemy. Considering that, on the PS4, the Options button and the right side of the touch pad do the same thing, the lack of shortcut to a favourite menu is a shame.

Those cassettes largely replace the Codec calls from previous games…but there are automatic Codec calls too. So what happens far too often is that you’ll be listening to some very tense drama unfold, the Ocelot will automatically call to tell you about the plant you just picked up, talking over the tape. It’s something that happened in Ground Zeroes too and I’m disappointed it wasn’t fixed.

You can press L1 when running or using your binoculars to hear a random call specific to the area or certain objects you’re looking at, but Ocelot and Miller don’t have much to say. Looking at a soldier and pressing L1 will only ever play the one piece of dialogue (Ocelot saying “A Soviet soldier…” then going into why they’re all Russians instead of more local ethnicities). It’s a small let down, because I’d like to know about their equipment, their tactics, anything else that Sigint or other past support members would cover. I miss our conversations.

To compensate, you can eavesdrop on random conversations between enemy soldiers, making sneaking around unseen all the more delicious. And educational! I got heads up on changes in enemy equipment that way, rumours of character who had yet to appear, and a funny chat about George Orwell. So the loss of the old Codec conversations isn’t so bad. If anything, it’s made things more immersive.

Right now I’ve just begun to do missions in the Angola-Zaire boarder and the new mix of jungle and swamp environments is already forcing me to rethink how I play. Truly, it’s been an unbelievably involving game so far that has mechanically surpassed previous Metal Gears, and while I’ll wait until I play it to death and give it a final (and likely long) comprehensive review to say my final verdict, I am absolutely loving it so far and would recommend it. 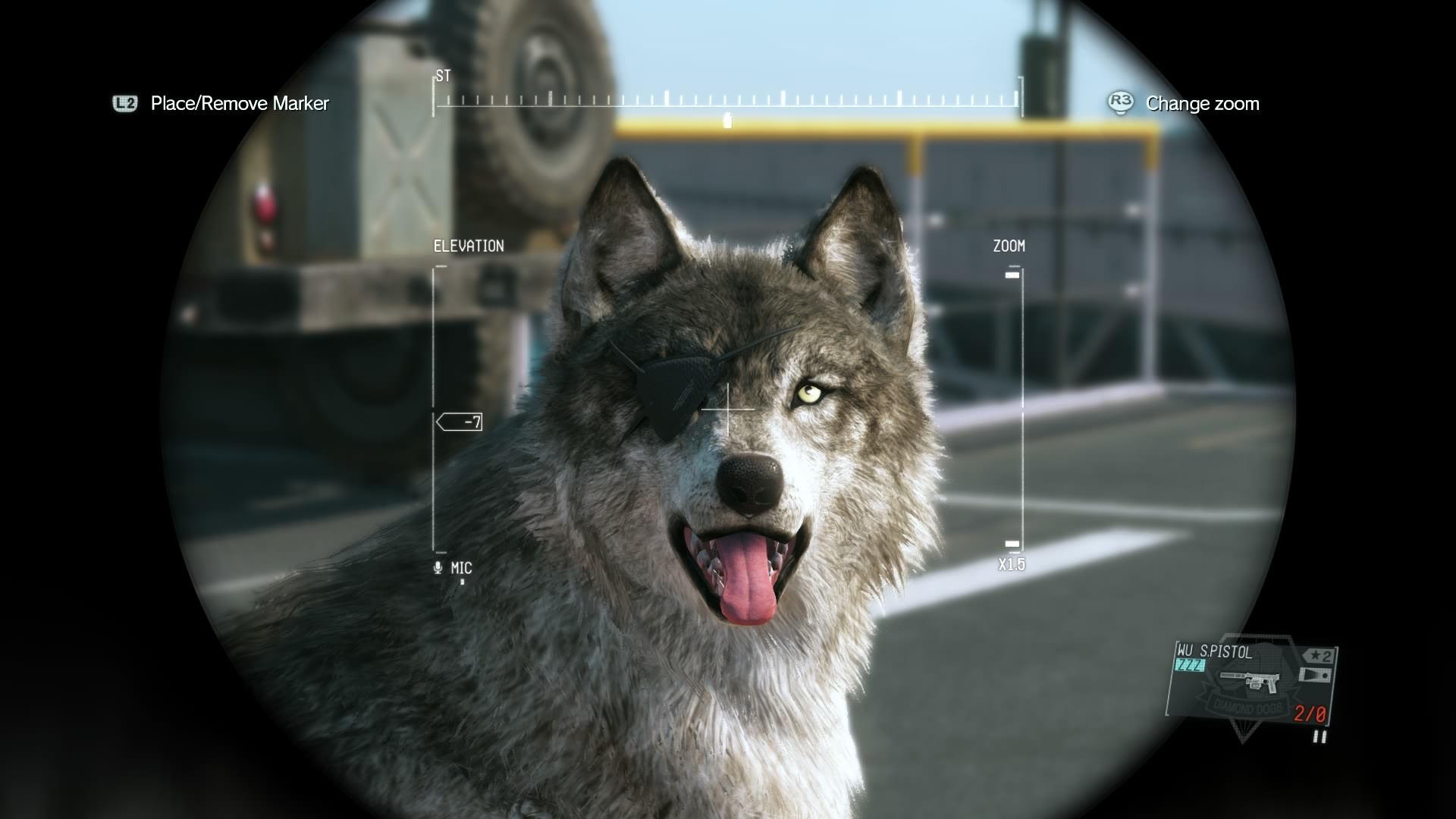