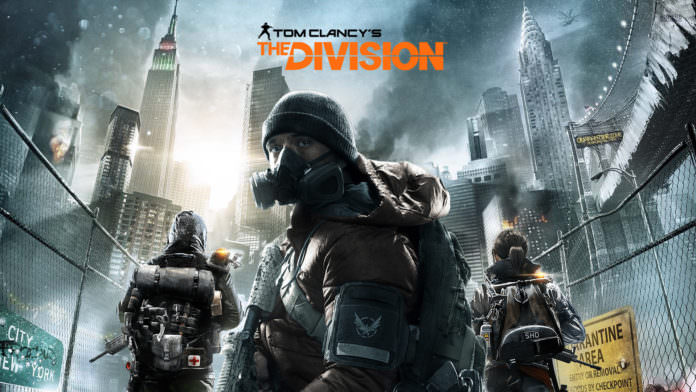 Tom Clancy’s The Division by Ubisoft Massive is an MMO shoot n’ loot supposedly similar in a lot of ways to Destiny. It’s safe to assume that the beta for The Division is pretty close to the full game that is going to be offered in March. That being said I stumbled over a bug immediately upon entering the beta, where no matter how many times I changed my language to English the entire menu system kept reverting back to Spanish. A quick reboot of the game fixed this, but it was a disheartening beginning nonetheless.

The weather in The Division changes intermittently and when I began my playthrough I found myself in the middle of a snow storm. After I had finally gotten through the menu debacle I found myself mesmerised by the movement of the snow falling around my character. The game looks beautiful, anyone can see even just from screenshots, but the graphics combined with the perfectly designed movements in the game make it look amazing. It manages to juxtapose the bleak, rundown, often dirty city with delicate, white snow. The lighting in the game is also stunning. As you move through the world it really helps to bring a sense of atmosphere to the game. The world itself is highly detailed and fascinating to simply walk around in, so much so, that I spend some time just walking in search of graffiti and posters. Playing as a character in The Division has a very human quality to it. All around you are people struggling to survive, asking for help, talking to each other, while the seedier individuals are murdering and looting. The UI design really contrasts this human element with tech-heavy visuals. The in-game navigation included an augmented reality overlap within the game itself that mirrored the navigation line as it appeared in the minimap.

Apart from down in the tunnels, The Division’s maps use a lot of grey and blue tones so the orange used for the navigation line works really well. The HUD design is very interesting. Normally non-diegetic HUD are usually found around the edges of the screen. In The Division, however, the core information not found in the top corners of the screen hovers beside the player’s character. This risky choice in UI design paid off, leaving players with a sleek and functional UI that doesn’t distract or take up too much space on the screen. 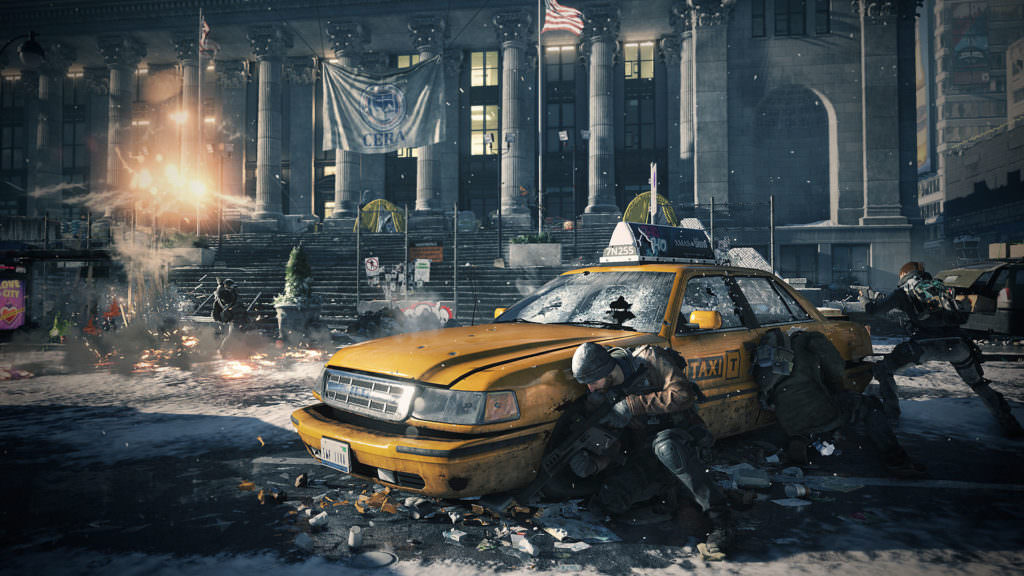 When I heard about the game first I felt a little apprehensive about the third person shooter concept. Apart from Gears of War I’d never really played one that had really gripped me. I am more of an FPS player at heart. However, once I started playing I found that it actually didn’t really bother me as much as I thought it would. I suspect this is because the game felt very smooth, unlike the clunky memories I have of the cover system in Gears of War. Attempting to switch between objects for cover in The Division reveals a small line pointing to where your character will go. This mechanic eliminated all the mistakes I used to make when I moved between cover in GoW. 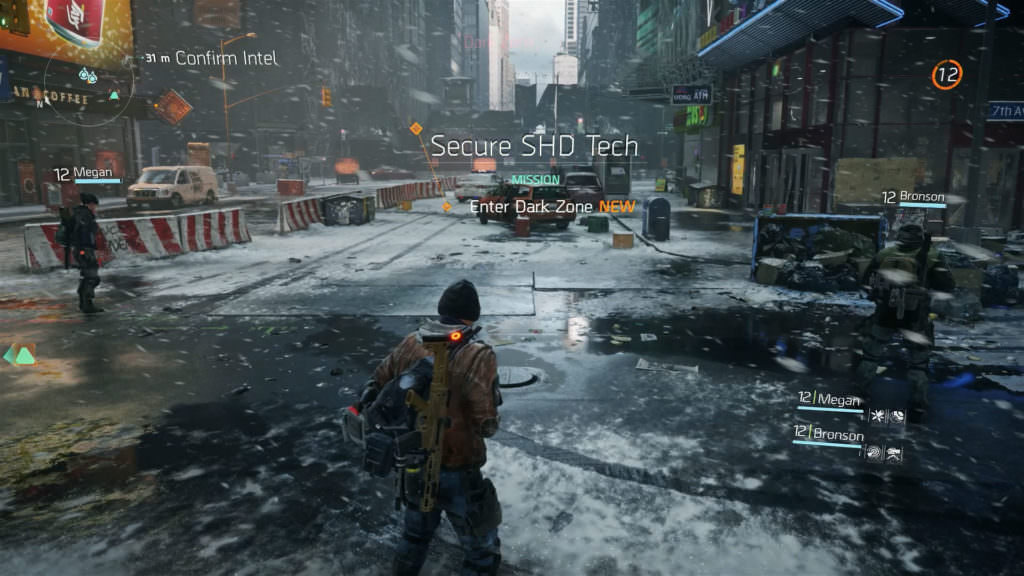 The Dark Zone is a huge aspect of the gameplay in The Division. It is an area of the game where players can go to get the best loot, which the must be extracted out of the area via helicopter. Other players can “go rogue” and kill players in the area for their loot and try to extract it themselves. Although I enjoyed the Dark Zone a lot, I am still harbouring mixed feelings about it. I had an excellent time because I was fortunate enough to have friends to play with all weekend. But, during the early hours of Sunday morning when no one else was online yet I came to the stark realisation that, The Dark Zone was only fun with friends. Wandering around in there by myself I was nothing but a target as soon as other players noticed that I was alone. Even if I clearly had just entered and likely didn’t have any loot I found myself gunned down by rogue players. It was a frustrating experience that made me wonder, for the first time, if I would enjoy this game in the long term.

The proximity chat feature really adds depth to the gameplay mechanics within the Dark Zone. Used tactfully it can lure other players to you. If like me, you tend to forget about proximity chat, on occasion you inadvertently paint a target onto your back. The beta didn’t actually involve that much content in terms of missions, so players spent the majority of the beta in the Dark Zone, I think this might be reflective of how the developers expect players to divide their time once the game is in full release. If this is true it could segregate the player base and dilute the game for players that don’t have a team to play with.

So, did I think The Division was anything like Destiny after all? Actually, no. Aside from the shoot n’ loot approach that the developers took there’s not a lot of resemblance between the two games. That being said, as an avid Destiny player, I can not wait for The Division to be released in full, as I feel it offers a different gameplay experience and team dynamics. Overall I felt the beta was great, but a lot of the game’s success may hinge on the Dark Zone.

You always have to wonder what type of game we are going to receive when Ubisoft is involved. I will admit
the E3 trailer I first saw, the game looked incredible. I’ve watched several gameplay video’s and the and I
like the blind fire element. I hope Ubisoft doesn’t screw this up. – Nice Review