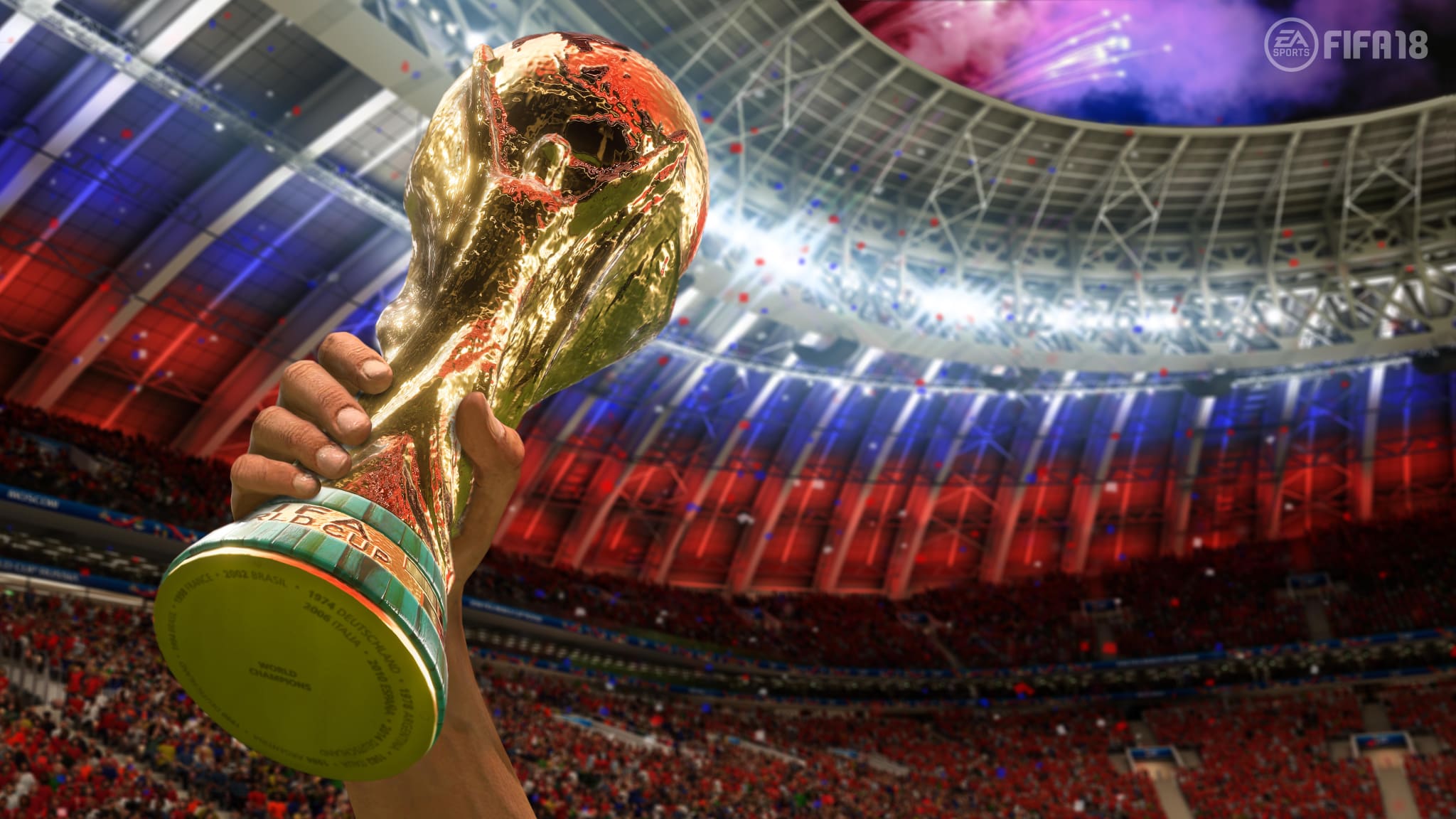 FIFA 18 plays host to the first free DLC version of a World Cup license – 2018 World Cup Russia doesn’t dazzle on its debút. Senegal, it is not.

This games writer understands that the DLC is free but was it not designed to increase FIFA 18 sales and add another level of depth to FIFA Ultimate Team??

Of all the shady stuff done in the name of Comrade Putin, bringing the World Cup to Russia is one of the least terrible ones. FIFA™ (the organisation, not the game) are massively corrupt so if Russia didn’t buy the chance to host, we probably faced worse. Qatar twice in a row or something. At least Russia has a national team worth talking about and the games won’t be a health hazard to the players and the spectators.

Free DLC is Free (and you can certainly tell)

EliteGamer.com reviewed FIFA 18 back in the day. It impressed with its improved visuals, engaged crowds and break from the lock-step running of old. However, the series’ long-standing complaints still rear their heads after an extended time with the game.

To their credit, the DLC coats FIFA 18 in a goosebump-hailing World Cup livery that gets me excited for the Soviet Soccer Sojourn…

Destiny. Scripting. Momentum. Whatever you choose to call it, RN-Jesus will call in because the match you are playing ‘isn’t exciting enough’. 35-yard piledrivers from a standstill, random stick-waggling still being effective and hands-off defending eventually ruined FIFA 18 for me – I like being rewarded for skill, not for simply trying.

FIFA 18 was also the second Frostbite FIFA. What was supposed to be a huge refinement of the engine with tons of extra stuff to bring the best out of it was more of an incremental upgrade with a giant ‘The Journey’ patch. Innit, bruv?

2018 World Cup Russia is the exact same experience as FIFA 18 but with a different skin, some stadia and official up-to-date kits. To their credit, the DLC coats FIFA 18 in a goosebump-hailing World Cup livery that gets me excited for the Soviet Soccer Sojourn… only to crush my spirit when I realise how little else is here.

The World Cup itself and a stripped-down FIFA Ultimate Team is all you get. It would be unfair to line WC18 up against the 2014 entry since this effort is free but there were so many little touches in the Brazilian tournament title that made you want to play it. Scenarios were phenomenal, the game came with videos, slideshows and simple text explaining a team’s history at the tournament, how they qualified etc.. Basic stuff that can’t cost much once you own the license.

You can essentially ‘finish’ the DLC in seven games provided you have no interest in the sub-par WC FUT. That is how many it takes to win a tournament so that is fair enough, right?

All other World Cup titles attempted to stretch it out a little, there is nothing new over FIFA 18 here beyond the stadia and kits – even the tournament itself can be made in vanilla FIFA 18.

20 years ago, on finishing World Cup ’98 we were given a series of classic finals – complete with monochrome TV images and care-free 2-3-5 formations. There was the facility to swap out players and change the squads.

Is there no happy medium to be found?? We are either punked for Messi in ‘nilla FUT 18 or he is quantitatively-eased into worthlessness in World Cup FUT

Other EA World Cup titles had modes to make you play the game once the tournament was over; 2018 World Cup Russia doesn’t even try. It seems too aware that it costs nothing and that it will be de-patched and forgotten about as soon as the Moscow final ends 1-0.

It’s Not Even Greedy

FIFA Ultimate Team is EA’s cash cow. The acquisition system forces players to play a million games online against teams made of ‘rare’ cards until the player snaps and buys 50 Gold Packs.

In 2018 World Cup, this mode has been stripped bare and has had any difficulty in acquiring a dream-team removed. Players can start with 90+ footballers. Cristiano Ronaldo, Messi etc. will appear in your starting FUT squad with hilarious regularity. Is there no happy medium to be found?? We are either punked for Messi or he is quantitatively-eased into worthlessness.

Even starting the game makes the Xbox One X hesitate

FIFA have added some ‘Icons’ related to the World Cup – as in, they have played in one. The best players to have played in the prestigious tournament are already in the game so it is hard to get excited by the prospect of playing as Alain Boghossian. (Yeah, I went there.)

From Russia with Bugs

Despite several patches applied with great urgency, FIFA 18: 2018 World Cup Russia is still in a relatively unfinished state. The very first thing you will notice is the increased load-times. Even starting the game makes the Xbox One X hesitate. Then it loads for longer then usual at seemingly every step of the way.

Some of the very worst bugs have been ironed out – such classics as the invisible goalkeeper during penalties, invisible goalposts, players 10 yards off the pitch etc.. The framerate is still abysmal though – set-pieces or goal-mouth scrambles seem to be the biggest challenge for any football game. The choppiness and struggles of 2018 World Cup Russia to render itself are grating and affect the experience from time-to-time.

If you are a FUT player, the added instability might kill you. Maybe literally if you take FIFA seriously. Lag and teleportation seems amplified. Your opponent will often skate by as you furiously hammer tackle to no avail – it just doesn’t work that well. 2018 World Cup Russia‘s servers act like FIFA 17′s did on a very bad day.

What Have We Learned

EA could have put a lot more effort in the making this patch. This games writer understands that the DLC was free but was it not designed to increase FIFA 18 sales and add another level of depth to FIFA Ultimate Team. FUT is a guaranteed money-maker; with some love, 2018 World Russia could have made its money back through FUT WC. 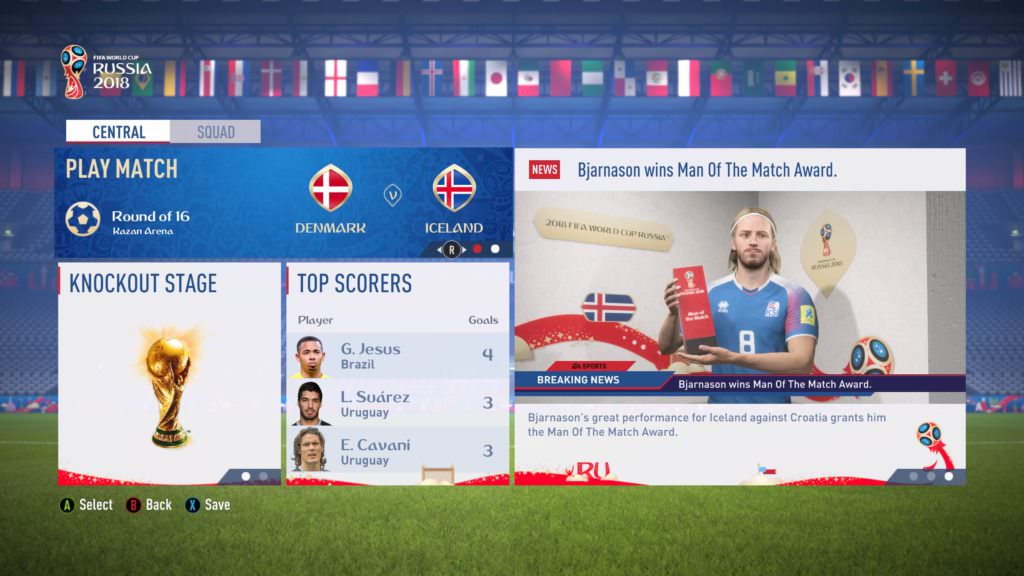 EA have also taken a few judgements in the court of public opinion. This was an easy opportunity to give something back to the players but they missed it badly. Like, Ronnie Rosenthal missed.

> Of all the shady stuff done in the name of Comrade Putin, bringing the World Cup to Russia is one of the least terrible ones

Is it normal to write such statements in a game review?

This is your first time here then,
yeah?
😀