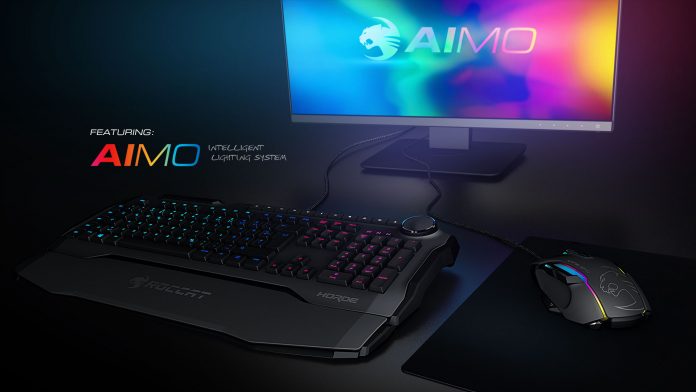 I love Germany! I love the food, I love the beer and I also love Gamescom! Gamescom quickly became the worlds biggest and most popular gaming event in the world, and for good reason. The halls are crammed full of people but it’s not the nightmare to get around as E3 or any of the other American events is. Sure, it’s slow getting from one place to another, but the event management for the event makes it much less stressful than any other event.

My favourite part of Gamescom is the hardware As an avid tech nerd, I love to see the next big thing. One of those big things is the new AIMO lighting from ROCCAT that comes with the Horde and Kone, their new keyboard and mouse line. ROCCAT is a German manufacturer that hails from Hamburg, a city rich in architecture that can be seen in its many bridged and structures built around Hamburg port, the biggest port in Germany.

Each year I visit the ROCCAT, their designs get better and better. In 2015, ROCCAT gave us the Skeltr, an advanced keyboard with an abundance of features and a holder for a smartphone. PC players welcomed this feature as many used companion apps for their games. In 2016, ROCCAT unveiled an updated version of the Skeltr which gave us better phone integration, a rubber trench for the phone to sit instead of a stand and a better build quality overall. They also released the Sova, a lapboard that brought PC gamers back into the living room.

With a great portfolio behind them, ROCCAT this year have unveiled the Horde AIMO and the Kone AIMO. Both products have an amazing build quality and fantastic design, while also utilizing the new AIMO lighting. I got a chance to get some hands-on with both products as well as the software that powers the AIMO intelligent lighting system.

The new Kone series mice come in three flavours; Black, Grey and White. Each one integrates with the AIMO intelligent lighting system and can be configured in the ROCCAT Swarm app. The overall build quality has been greatly improved and redesigned. It still has that ROCCAT feel, but it’s more refined and leads to a smoother experience.

The ROCCAT Kone Aimo features a Pixart PMW3361 optical sensor with a maximum resolution of 12,000 DPI. According to the manufacturer, it can process accelerations up to 50G as well as distances up to 6.25 meters per second without any problems. It also has a DPI switch to change the sensitivity on the fly. Furthermore, it is equipped with Omron switches.

The Kone AIMO features three buttons in the thumb zone where most mice would normally have two. Below the standard extra two buttons there is a third, out of the way but now inaccessible. The lower button is set to Easy-Shift[+], a duplicator technology that lets you assign a secondary function to the mouse’s buttons. You can assign one button or multiple giving a lot more control to the customisation.

The Kone Aimo will be available in September at an advisory price of €79.99.

The new mouse is also joined by a new gaming keyboard – also with the AIMO intelligent lighting system. The Horde AIMO comes with new in-house membrane switches (membrane 2.0) installed and unfortunately there is no mechanical version. The rubber dome keycaps, which have come a long way compared to the ROCCAT Skeltr, are intended to feel more like a mechanical keyboard than previous models.

The pressure points are slightly tighter and release before pressing a button all the way through. This is different from what Roccat is accustomed to, they are similar to black Cherry MX switches. In addition, the spacing between the individual keys has been increased with the keyboard. This is to make it easier and faster to type (or frag?). This is intended to make it easier to find a faster one and to use a better typing. At the last keyboard, the Skeltr, Roccat has shown even more innovators, with the horde they create the smartphone connection again. 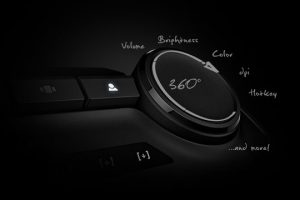 The Tuning Wheel and keys provide fast and intuitive control for multimedia, illumination, brightness, dpi, volume and more, and can be customized completely to suit each gamer. Rotating freely through 360° with precise, tactile steps, the tuning wheel provides on-the-fly command power with accuracy. The Tuning Wheel is also fully compatible with Windows 10 Dial functionality, making the Horde AIMO the first keyboard in the market with this feature.

The Horde AIMO also comes with improved anti-ghosting. A new key-mapping technology developed by ROCCAT engineers provides a better solution to fast-paced gaming. It ensures you can press as many keys as you want and every single keystroke will register, without fail. This is bad news for salty gamers who rely on bad technology to mask their low skill.

The Roccat Horde will be available from November onwards and the price is still undetermined.

Does the Horde Aimo feature macro profiles? I don’t see any M1-M3 keys, but wonder if this handled via the tuning wheel.

He specifically said that in the video.

But too late, already purchased Corsair k95 rgb platinum since its on sale for $150..Roccat taking too long to release this, would have gone perfect with my Tyon 🙁